In a battle of two teams fighting for the final playoff spot in the Eastern Conference, the Boston Celtics got the better of the Charlotte Hornets on Monday.

The Celtics led by double digits for the majority of the night and held off a late Hornets rally to lock down a 116-104 win at Charlotte’s Time Warner Cable Arena.

The victory, which came one night after a blowout loss to the Los Angeles Clippers, continued the Celtics’ streak of dominance in second nights of back-to-backs. They’re now 9-1 in their last 10.

NO SNOOZE BUTTON
The Celtics shook their bad habit of starting slow by hitting five of their first six shots, scoring 10 of the game’s first 12 points in the process. They led by as many as 11 in the first quarter, and while Charlotte’s shooters quickly found their stroke, Boston still led 26-24 at the end of one.

The Celtics had been outscored in the opening frame in each of their previous seven games.

CRASHIN’
Boston’s second unit pounded Charlotte in the second quarter, pushing the Celtics’ lead back to double digits. Playing a key role in this surge was seldom-used forward Gerald Wallace, who logged 12 minutes in the first half (his season average is 8.4 per game) and came up with four rebounds and two steals. Wallace scored just two points in those dozen minutes, but boy, were they pretty.

Wallace played just three minutes in the second half, adding another two points and one rebound.

After relying largely on mid-range jumpers in the first quarter, the Celtics did a much better job of getting to rim in the second while also improving their efficiency from beyond the arc. Twenty of their 30 points in the frame came via layups, free throws or 3-pointers.

GETTING STARTED
The strength of this Celtics team of late has been its bench, so it was encouraging to see Boston’s starters carry the load for a change. This was especially true in the third quarter, when coach Brad Stevens did not insert a single reserve until the 2:30 mark.

Boston’s starting backcourt of Avery Bradley and Marcus Smart had its best game in recent memory. Bradley’s 13 points in the third quarter (he scored a game-high 30 overall to go along with eight rebounds) helped the Celtics steadily grow their lead, while Smart served as the jack-of-all-trades type that can impact the game in myriad ways.

The rookie finished with 14 points — his highest total in nearly two weeks — six rebounds, four assists, three steals and one block, and his trademark energy was infectious.

The Hornets trimmed a 22-point Celtics lead down to nine in the fourth thanks in large part to the efforts of guards Kemba Walker (28 points, 12 assists) and Mo Williams (19 points; 11 in the fourth). Williams was the game’s leading scorer when these teams last met back in February, but Bradley wrangled a jump ball with 24.4 seconds to play and drew a clear-path foul to ice the game.

PLAYOFF PICTURE
Monday was a lean night in terms of games with playoff implications, as the Indiana Pacers, Brooklyn Nets and Miami Heat all were idle. The Celtics’ win pushed them back into eighth place in the East, mere percentage points ahead of the Nets.

Up next: More of the same awaits Wednesday for the Celtics, as they’ll host an Pacers team that sits just one game back of the C’s in the Eastern Conference standings. 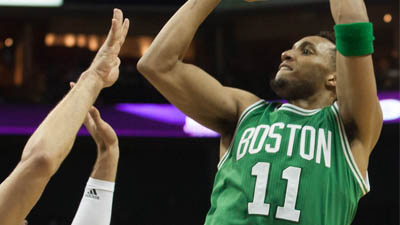