NFL commissioner Roger Goodell probably was the unhappiest person on earth Thursday morning. The second-most ticked off? Gregg Doyel of The Indianapolis Star. Someone really peed in his Cheerios.

You see, Mr. Doyel — he doesn?t even have the decency to spell his name correctly — remains bitter about the Indianapolis Colts? AFC Championship loss to the New England Patriots because of Deflategate. So when U.S. District Court Judge Richard Berman ruled Thursday to vacate Tom Brady?s four-game suspension, it only was a matter of time before Doyel chimed in with a scathing take.

And boy, did he deliver.

?Don?t do it,? Doyel pleads at the onset of his column. ?Don?t fall for the DeflateGate magic trick, the illusion that the rest of the country is falling for today.?

(Doyel certainly knows how to set the stage for an us-against-the-world diatribe. Personally, I was hooked. What?s this magic trick this man speaks of?)

?Elsewhere, as has been the case for months, they?re paying so much attention to the left hand — the one waving Patriots pom-poms and wearing a miniature Tom Brady jersey — that they?ve somehow forgotten what the other hand has done,? Doyel continues. ?When the right hand cheated — and admitted to it.?

My first reaction: Hands wear jerseys? Must be a sock puppet.

My second reaction: I need more.

Doyel goes on to explain how Brady and the boys denied the Colts the ?right to a fair football game? by allegedly lowering the air pressure in footballs. According to Doyel, we all forgot that fact amid Brady?s suspension appeal and Thursday?s ruling — presumably somewhere between dressing up our left fingers and shunning our right ones — and we?re giant dummies for doing so.

Doyel explains that if Judge Berman ruled in favor of commissioner Roger Goodell and the NFL, the Patriots would have been considered ?guilty,? for all intents and purposes, among the general population. Party at Doyel’s.

But since Brady won the case, it?s viewed as a victory for the Patriots. And, apparently, that?s just plain foolish.

?You see the illusion, right?? Doyel writes, pandering to the Indianapolis crowd. ?The left hand is over there snapping and smirking and destroying a cell phone while the right hand is reaching — has already reached, and been caught doing it — into the Colts? pocket and stealing their chance at a fair fight in the AFC title game.?

Oh, the fair fight. Doyel’s next few paragraphs are magical.

Basically, Doyel admits Brady and Co. would have kicked the crap out of the Colts no matter what — ?a blowout was going to happen whether Brady?s footballs were inflated, deflated or replaced with a ham-and-swiss on rye,? he writes — and that the quarterback?s successful suspension appeal ended with ?a legitimate overall outcome? based on a whole bunch of technical legal jargon that’s cool in court but totally uncool when it comes to arguing on the Internet and in the newspapers.

For kicks, Doyel throws caution to the wind and completely misrepresents those manning corner offices down in Foxboro. In Doyel’s world, the Patriots’ new Super Bowl banner will go up alongside a massive white flag labeled, “Deflategate.”

?Patriots owner Bob Kraft consented to the findings in the Wells Report that two ball boys intentionally let out the air in the team?s footballs to make it easier for Tom Brady to throw them, easier for Rob Gronkowski and Julian Edelman to catch them, and harder for LeGarrette Blount and Jonas Gray to fumble them,? Doyel writes.

Uh, I?m not sure that?s how everything went down, even when Kraft reluctantly chose to end the Deflategate rhetoric back in May. But again, who am I to stand in the way of a good argument?

Doyel, after suggesting some folks in New England are ?stupid,? concedes he?d probably rule as Judge Berman did Thursday despite his gut telling him Brady?s guilty and thus deserving of a four-game suspension. He also questions New Englanders — a huge generalization — for believing that ?two ball-boy flunkies? would take it upon themselves to tamper with footballs in the AFC Championship.

As for the folks in Indy? Sleep easy. Your fearless leader has everything under control.

?Let them have their victory today. Doesn?t really matter here, does it?? Doyel writes. ?Let Judge Berman channel his inner idiot by citing the irrelevant argument that, because steroid cheats and domestic abusers get suspensions of four games, Tom Brady shouldn?t get four games for something as relatively innocuous as (allegedly) deflating footballs. Let Brady use this victory to reaffirm his innocence.

?And it doesn?t change that everybody knows it.?

It also doesn?t change Doyel?s bitterness, except to give him one more reason to blow a gasket. 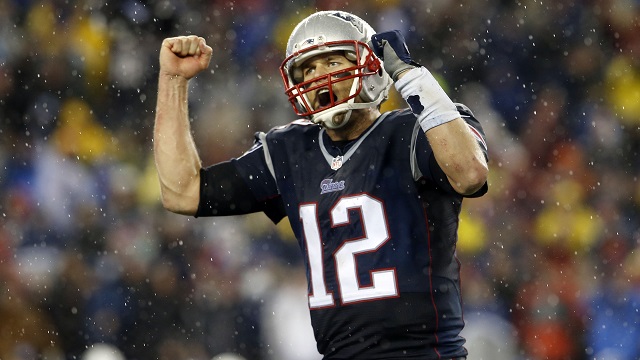 John Daly: I’m OK Because I ‘Smoke Two Packs Of Cigarettes A Day, Not Three’