In an entirely unsurprising development, Tom Brady was not given a hero’s welcome Sunday night in Indianapolis.

A cacaphony of boos rained down on the New England Patriots quarterback as he took the field for the first time, and homemade signs taunting Brady & Co. were prevalent around Lucas Oil Stadium.

Perhaps the least subtle of those signs was a massive banner bearing the words “Cheaters Exit Here” that a group of fans displayed as the Patriots exited the field at halftime. The banner also bestowed upon Brady the nickname “Mr. Pinnochio,” misspelling the name of the beloved Disney character in the process. In addition to being a waste of a perfectly good bed sheet, the oversized signage also might have gotten a few Colts fans ejected from the stadium.

Fans hung the CHEATERS EXIT HERE over the railing next to #Patriots tunnel. Security got involved. Little old lady took banner and hid it.

Security escorting out fan in Luck jersey, who's still pleading his case. Little old lady with the banner vanished. #mystery

Don't know if the issue down there was the banner or something that happened as #Patriots exited but security swarmed pretty quickly.

Halftime ejection wouldn’t have been the worst fate to befall a Colts supporter, though. The Patriots, who trailed at half, controlled the final two quarters en route to a 34-27 victory. And the Colts … well, the Colts did this. 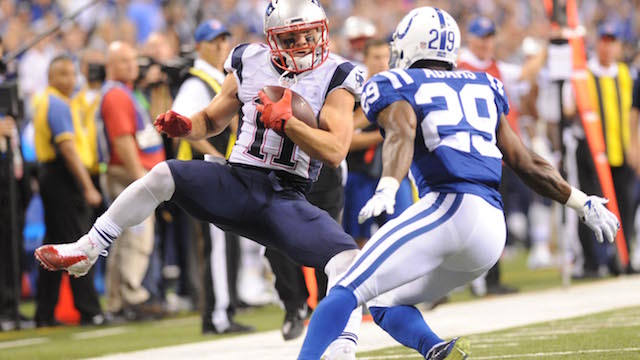