BOSTON — The Celtics are not going down without a fight.

The C’s scratched and clawed with the Atlanta Hawks through four quarters Sunday in a tightly contested Game 4 at TD Garden, then stepped on the gas in overtime to come away with a clutch 104-95 win that evened the teams’ first-round playoff series at two games apiece.

The Celtics trailed by as many as 16 points early in the second half but fought back with a strong finish and forced overtime with an Isaiah Thomas layup and a botched final possession by Hawks guard Jeff Teague.

Thomas tallied 28 points in a balanced Celtics scoring attack that saw five players in double figures. Marcus Smart came up huge with 20 points off the bench, while Evan Turner added 17 points and Jonas Jerebko chipped in 16.

The Celtics will look to take the series lead Tuesday night when the series shifts to Atlanta for Game 5.

FRIENDLY CONFINES
The Celtics couldn’t match Friday’s huge first quarter, but they still made the juiced-up home crowd happy with another decent start.

Millsap poured in nine of Atlanta’s first 15 points to give the Hawks an early lead, but Crowder’s second 3-pointer of the quarter sparked a 9-0 run that put Boston in front.

Thomas had a relatively quiet six points in the first quarter but still managed to find his way onto the highlight reel.

LITTLE GUY, BIG DIFFERENCE
The Celtics struggled to score in the second quarter with Thomas resting on the bench, and Atlanta took advantage.

Boston went just 2 for 15 from the field over a six-plus minute span with Thomas out of the lineup, allowing the Hawks to reel off an 18-6 run that put them ahead by five.

Yet Thomas entered at the 7:30 mark, and the Celtics quickly regained their rhythm. Boston went on a 13-2 surge highlighted by a Smart 3-pointer and a layup-and-the-foul from Crowder that gave the C’s a six-point lead.

A white-hot Millsap scored 10 consecutive Hawks points in the final two minutes to give him 26 first-half points and put Atlanta up two entering the half.

RUNNING WILD
The Hawks came out sprinting in the second half, but the Celtics responded quickly with their own mad dash.

Atlanta scored the first 14 points of the third quarter, as back-to-back 3-pointers from Kyle Korver and Kent Bazemore stretched their lead to 16.

Yet the Celtics saved themselves with an excellent finish to close the quarter. After a 10-2 run midway through the frame cut the Hawks’ lead to single digits, Jerebko scored eight of Boston’s 10 consecutive points at the end of the third and beginning of the fourth to give the C’s a slim lead heading down the stretch.

It's a back-and-forth battle in Boston. Time for more winning plays like this: pic.twitter.com/14qMjZpaG4

BACK AND FORTH
A see-saw fourth quarter saw several exciting swings.

Smart erupted for a string of eight consecutive points on two 3-pointers and a thunderous dunk that put the Celtics in front by one.

Teague drilled 3-pointers on back-to-back possessions to put the Hawks up two with 20 seconds to play, but Thomas tied the score with a clutch layup on a strong drive to the hoop. The game then went to overtime after Teague couldn’t get a shot off on a bad final possession.

Bazemore had a 3-pointer overturned on a shot clock violation midway through the extra frame that would have put the Hawks up one. The Celtics responded with six straight points, including a back-breaking 3-pointer with 30 seconds to go that sealed a thrilling win for Boston.

PLAY OF THE NIGHT
Johnson made a statement right out of the gate with a huge block on Bazemore.

UP NEXT
The series shifts back to Atlanta on Tuesday night for Game 5. Tip-off at Philips Arena will be at 8:30 p.m. ET. Game 6 is in Boston on Thursday and Game 7 is in Atlanta on Saturday, if necessary. 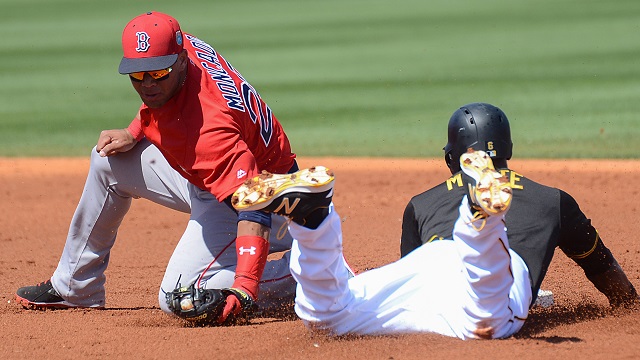