The Boston Red Sox were saved by two rookies in Sunday night’s game against the rival New York Yankees in the Bronx.

Yankees closer Aroldis Chapman gave up a game-tying homer to Rafael Devers in the top of the ninth and Tommy Kahnle allowed a go-ahead RBI single to Andrew Benintendi in the 10th.

GAME IN A WORD
Youth.

Boston’s young stars, Benintendi and Devers, came through with clutch hits in the Red Sox’s first series win over the Yankees this season.

IT WAS OVER WHEN…
Benintendi hit an RBI single with the bases loaded to give Boston a 3-2 lead in the top of the 10th inning.

ON THE BUMP
— Sox starter Chris Sale walked Aaron Judge in the first inning but escaped without any further trouble after striking out Gary Sanchez. He then pitched a 1-2-3 second frame. Sale continued to dominate over the next two innings by giving up one single and striking out three batters.

He ran into some trouble in the fifth, though. Austin Romine hit an RBI triple to deep right field on a ball that Red Sox right fielder Mookie Betts should’ve caught. Betts’ mistake allowed the Yankees to tie the score at one, but Sale would end the inning with a strikeout.

Sale reached double-digit strikeouts with an inning-ending K in the sixth. He now has 16 games with at least 10 strikeouts this season. Sale blew a 99 mph fastball — his fastest pitch of the night — past Romine to end the seventh frame.

Sale threw a game-high 21 pitches in the seventh, and it was his final inning. He finished with 12 strikeouts and two walks with four hits and one earned run allowed over seven innings.

— Matt Barnes entered for the eighth. After getting a groundout to begin the frame, Barnes gave up a walk, a hit to Judge and another walk, in that order, to load the bases. Todd Frazier hit a sacrifice fly to center field to give the Yankees a 2-1 lead.

— Addison Reed gave up a leadoff walk to Chase Headley in the ninth. Headley advanced to third on a sacrifice bunt and a groundout. Reed got two outs before being relieved by Kimbrel.

— Kimbrel struck out Brett Gardner to end the ninth with a runner stranded on third. He pitched a 1-2-3 10th to finish the game.

IN THE BATTER’S BOX
— Jackie Bradley Jr. plated the first run of the game with an RBI single in the fifth inning. His opposite-field hit scored Brock Holt from second.

— Holt reached base twice. He went 1-for-3 with a walk, a strikeout and a run scored.

— Devers’ game-tying homer in the bottom of the ninth came on a 103-mph fastball, the same pitch Hanley Ramirez struck out on to begin the inning.

— Benintendi’s RBI single with the bases loaded was his only hit of the night. He also walked once. Benintendi finished the series with nine RBIs.

TWEET OF THE NIGHT
Sale’s dominance in historical context.

UP NEXT
The Red Sox return to Fenway Park on Monday for a makeup game against the Cleveland Indians at 6:10 p.m. ET. Doug Fister will get the ball for Boston and will be opposed by Trevor Bauer. 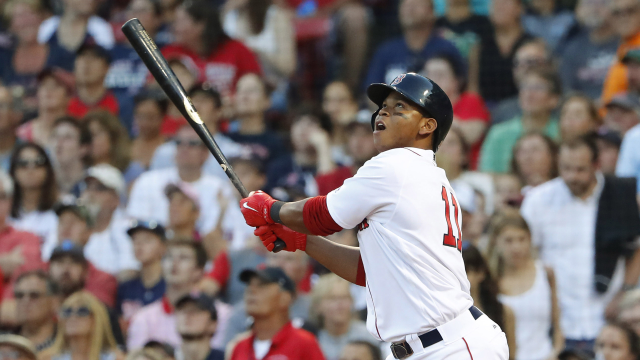