Here’s How Celtics Could Have Four First-Round Picks In 2019 NBA Draft - NESN.com Skip to content

The Boston Celtics did not have the luck of the Irish during Tuesday night?s 2018 NBA Draft Lottery in Chicago.

The Los Angeles Lakers? pick would?ve conveyed to the Celtics as part of the trade with the Philadelphia 76ers from last June if it was the No. 2 or No. 3 selection. The pick ended up being No. 10, so it?s going to the Sixers.

It?s not all bad news for Boston, though. Because the Lakers pick didn?t go to the Celtics, Boston now receives the more favorable of the Sacramento Kings? or 76ers? 2019 first-round picks, unless one is the No. 1 pick. The 76ers put top-pick protection on both of them.

This Kings pick isn?t the only first-round draft choice the Celtics could own in 2019. They actually could have four (!) of them.

Here?s how that scenario could become reality:

Los Angeles Clippers first-round pick: Celtics receive this selection if the Clippers make the playoffs next season because it?s top-14 protected. If this pick doesn?t convey in 2019 or 2020 (top-14 protected both years) then Los Angeles will send its 2022 second-round pick to Boston.

Memphis Grizzlies first-round pick: The Celtics receive this pick if it falls between Nos. 9 and 30. If it does not convey in 2019, the pick then becomes top-6 protected in 2020. If the selection doesn?t convey by 2020, it becomes an unprotected 2021 first-rounder going to Boston.

Celtics first-round pick: Boston also has its own selection, which probably will be toward the end of Round 1.

So, to recap, Celtics fans next season will be rooting for the Kings to struggle (but not too much so they don?t have the best chance at the top pick), the Clippers to make the playoffs and the Grizzlies to be one of the first few Western Conference teams to miss the postseason. Although, given the state of the Grizzlies franchise, it might be better for the C?s if that pick doesn?t convey until 2021 when it?s unprotected. Memphis is expected to begin rebuilding soon.

The Celtics don?t have any more lottery picks from the Brooklyn Nets, but that doesn?t mean more quality selections acquired in trades aren?t on the way.

Boston could have a top-five pick next season if the Kings are bad, and that, at least right now, seems pretty likely. 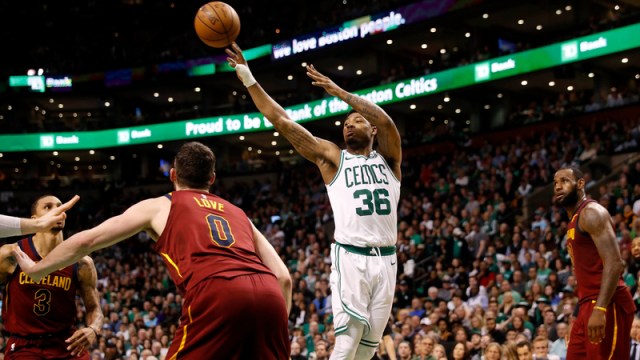 Brad Stevens Wants Marcus Smart To ‘Let It Fly’ In Game 2 Vs. Cavs