— The biggest storyline of OTAs thus far has involved two players who have yet to show up: quarterback Tom Brady and Rob Gronkowski.

For various and undisclosed reasons, Brady and Gronkowski — both of whom served as team captains last season — have chosen to skip each of the team’s voluntary workouts and practices to date, including all five days of OTAs.

Two of those sessions have been open to the media, and at both, players were peppered with questions about the two absent All-Pros. Most have offered brief, diplomatic responses, like the one safety and fellow co-captain Devin McCourty gave Thursday.

Another captain, linebacker Dont’a Hightower, went longer on the subject. He called the situation just another example of the “next man up” approach head coach Bill Belichick has preached throughout his Patriots tenure.

“As far as work goes, it?s honestly the same, man,” Hightower said. “12 (Brady) is a big part of this team and he means a lot to us in the locker room, but as far as the culture goes, it?s always been next man up. Whether it?s 12, or Gronk, or me missing, or whenever (Jerod) Mayo went down, or (Vince) Wilfork or whatever, it?s always been next man up. That?s the kind of way Bill has built this culture. Whenever the next guy is up, they?re just looking for that next chance and opportunity.”

With Brady out, Brian Hoyer and rookie Danny Etling have split reps under center. Gronkowski’s absence has created additional opportunities for reserve tight ends Dwayne Allen, Jacob Hollister, Will Tye, Troy Niklas, Ryan Izzo and Shane Wimann, all of whom are fighting for roster spots.

— Former NBA superstar Kobe Bryant, who knows a thing or two about winning championships, was the guest of honor at Wednesday’s Patriots practice.

?I have a ton of respect for Kobe,? Belichick said before Thursday’s session. ?Obviously a great player, had a great career. Spent the day with him (Wednesday). He had a lot of great observations and things we could learn from. He?s a tremendous guy.?

Patriots cornerback Stephon Gilmore snapped a selfie with Bryant during the ex-Los Angeles Laker’s visit to Gillette Stadium. Gilmore was 9 years old when Bryant won the first of his five NBA titles in 2000.

— Thursday’s practice was devoid of basketball legends, but several members of the Boston College coaching staff, including head coach Steve Addazio, were in attendance. 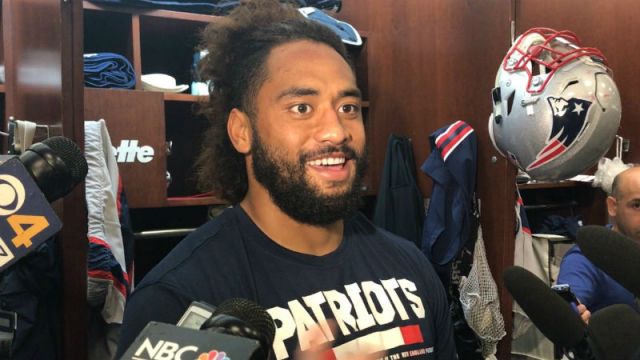