New England Patriots quarterback Tom Brady and tight end Rob Gronkowski reportedly will return to the practice field next week for mandatory minicamp. But what will they do the following week when voluntary organized team activities recommence?

Will they continue to sit out the voluntary sessions even after taking part in minicamp? Or will they decide to stick around and participate in the final four sessions? It would be a little strange if they show up for three days of mandatory minicamp then continue their absence, right?

At the same time, if they’re going to participate in voluntary sessions, they would probably be showing up by now.

The Patriots held another open OTAs sessions Thursday, and it was still weird to watch a practice with no Brady.

It might not be wise to read too far into that, however, but he did make a nice pass breakup in practice. With Jason McCourty currently sidelined, it seems the spot opposite Gilmore is wide open. Ryan Lewis saw reps there last week, and Eric Rowe is getting some time in that role, as well.

The Patriots have a history of success with finding undrafted cornerbacks, and Jackson fits the bill. Most analysts rated him as an early third-day prospect, but it seems off-field issues forced him to go undrafted. He was dismissed from Florida after being charged with armed robbery. He was found not guilty and continued his college career at Maryland.

Lewis was a rookie free agent last year. I think he also has a shot. Another undrafted rookie defensive back, A.J. Moore, is a speed demon and could find a spot on special teams. An undrafted free agent makes the Patriots’ roster every year.

Seventh-round pick Keion Crossen was a standout in the first open OTAs session, but he was limited in Thursday’s practice and didn’t see any time in team drills.

Do you see any of the Pats’ many RBs being cut before the season?
— @DebatingPatriot
The Patriots currently have seven running backs on their roster, and they’ll only carry four or five during the season, so yes, certainly, barring injury.

Rookie free agent Ralph Webb is an easy cut until we see him do something when the pads come on. I might pick Jeremy Hill over Mike Gillislee at this point. I think Hill would add more value as a short-yardage back. I also have some questions about Gillislee’s effort after some drill work in OTAs.

Has anyone in the tight end group stood out during OTAs? If they continue to play as OTAs have suggested, who do you expect to stick on the depth chart behind Gronk? #MailDoug #NotDougsBurnerAccount
— @TeamCrazyMatt
Jacob Hollister and Will Tye have both stood out. I’m especially intrigued by Tye since he was a starter for two seasons with the New York Giants.

I’m interested to see what he could do in the Patriots’ offense, if he even makes the team, with a full season on the practice squad under his belt.

The Patriots have a wide-open competition behind Rob Gronkowski at tight end. Hollister, Tye, Dwayne Allen, Ryan Izzo and Troy Niklas are competing for likely two spots. Shane Wimann played tight end and fullback in college, but he was doing fullback drills Thursday.

Tye has legitimate NFL receiving skills. And he’s getting open in practice.

That’s really tough to say, and it’s not necessarily based on what we’ve seen in OTAs since so many players are either not participating or limited by injuries.

I like what Britt offers as a big-bodied outside receiver. Matthews might have more potential, but Britt currently is ahead of him since he spent time on the roster last year. Mitchell has missed two consecutive open OTAs — not a great sign for a guy with a history of knee injuries.

It’s possible Rex Burkhead begins the season as the starting running back over Michel, but I think the Patriots should roll with their first-rounder.

Rivers is a pure guess. That spot could be filled by anyone from Lawrence Guy to Adrian Clayborn, Elandon Roberts, Harvey Langi, Ja’Whaun Bentley or Deatrich Wise.

Guy wouldn’t give them enough of a pass-rush threat, and I think Clayborn is better saved for third down. In an ideal world, Rivers starts. But we’ll see how he looks when the pads come on. Langi’s versatility is intriguing.

@DougKyed What are the chances Berrios makes the roster? Has potential Edelman replacement and PR ability. I feel like he could ball out in preseason but would be on PS and signed by another team (the 2018 Austin Carr) #maildoug
— @masonFLD
His chances are higher than Carr’s because he actually was drafted.

Berrios was limited in practice Thursday. He caught punts, but he didn’t participate in team drills. We’ll have a better sense of how he looks when Brady is back and throwing to him.

Word ?round the playground is Corey Bojorquez is fire emoji. Chances he gets the gig, especially considering Allen is a FA next summer?
— @SMC_Tweets
Chances are pretty decent. It would save the Patriots some cap room if they think he can replicate what Ryan Allen offers.

The dynamic between Bojo and Allen must be strange, right? They’re fighting for just one spot on the team, and they spend all of their time together.

Seems the Patriots own real estate in players heads even when they lose. So my question is, how much fun do the Patriots players actually have? #maildoug
— @RichieT_FTW
I don’t think Bill Belichick ensures his team has as much fun in practices or meetings as other coaches. They’re not out there having water balloon or snowball fights. But I think the players have a lot of fun winning, and I think they find ways to entertain themselves.

Rob Ninkovich said after he retired that he and Devin McCourty would joke around during meetings. It’s not unusual to see players smiling during practice. But Belichick isn’t a players’ coach. He’s not Pete Carroll.

Biggest position of need from what you?ve seen in OTA?s? What are some potential solutions to address this position? #MailDoug
— @AdamTMyers
Quarterback.

Getting Tom Brady back on the field.

Christian Sam was one of my guys who I wanted on day 3. Saw he made a play in coverage. Have you noticed anything about him at all aside from that one play? Love your coverage, thank you! #MailDoug
— @JohnLimberkis
Thanks, John.

It’s tough to gauge the play of linebackers in non-padded practices, but he did make a pass breakup Thursday, which is a promising sign.

@DougKyed What do you even do when i dont ask “sup?” #MailDoug
— @June__NYC
Skies are definitely more grey. Gray? Grey? Shouldn’t we have just one spelling for this word?

I have a question, what is the meaning of life? #MailDoug
— @Kid_From_Quincy
Having fun. It’s too bad the Patriots are having none of it, according to Cassius Marsh.

I go to about 40-50 grad parties per year. Best grad party food / drink in your opinion?
— @NEPatriotsDraft
I like your suggestion.

A keg of 1919 Root Beer and brisket sandwiches always make my day.

What would you say the % is of Danny Etling making the roster? #MailDoug
— @TheMikeIsOn
Less than his current uniform number. #maildoug Have you enjoyed your time covering the Patriots?
— @MrQuindazzi
I’m having a lot of fun.

How is a rainbow made
— @mystqueandaura
With a hose on a sunny day.

Do we know what JMac is rehabbing from?
— @ChefdDds89
No, but Jason McCourty had an ankle injury last season.

What qb would you like the patriots to draft in next years draft, since everyone?s saying Etling is not the future?
— @lauvsix
If you think I’m already concentrating on the quarterback class in the 2019 NFL Draft, you’re crazy. No offense. Get back to me in February.

@DougKyed Do you see any way to please both parties regarding NFL controversy? I see both sides arguing rather than listening to eachother? #MailDoug
— @StephenPorier
I like Devin McCourty’s suggestion of having all players stay in the locker room for the national anthem.

Scar, like the Old Man on the Mountain (who can even remember the NH Old Stone Face), won’t last forever. Who works most closely with him and who might be called upon to fill his shoes should he retire?
— David G.
I’d predict it would be coaching assistant Cole Popovich. He played guard at Fresno State under Pat Hill, who was Belichick’s offensive line coach with the Cleveland Browns in the ’90s. 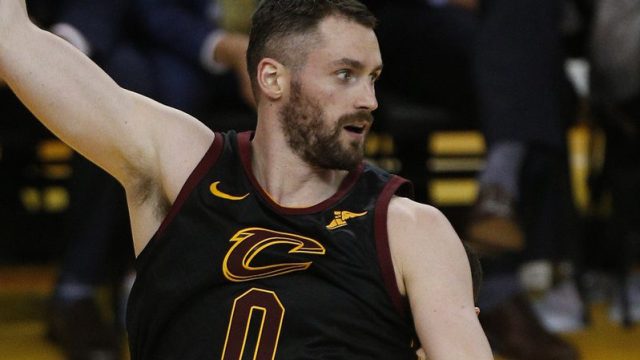 Will Kevin Love Be Suspended For Leaving Cavs Bench During Game 1 Scuffle?

NFL Rumors: Tom Brady Has Been Throwing With Julian Edelman At Gillette Stadium