Final, Steelers 17-10: The New England Patriots suffered their second consecutive defeat Sunday in Pittsburgh, falling to the Steelers after a pass to Julian Edelman on fourth-and-15 fell incomplete in the final minute.

The loss allowed the Houston Texans to maintain their hold on second place in the AFC. The Patriots now sit in third with two weeks remaining, faced with the prospect of potentially playing on wild-card weekend for the first time since 2009.

Penalties were a major issue for the Patriots, who were flagged a season-high 14 times for 106 yards. They also struggled mightily against the run for the third consecutive week, allowing Pittsburgh to rack up 158 yards on 25 carries.

The Patriots will finish the season with a record of just 3-5 away from Gillette Stadium — their first sub-.500 road mark since 2009. They’ll finish with home dates against the Buffalo Bills and New York Jets.

Fourth quarter, 2:30, Steelers 17-10: The Steelers drained more than five minutes off the clock with a 13-play drive that featured two third-down conversions but were forced to settle for a field goal after J.C. Jackson broke up a pass intended for JuJu Smith-Schuster in the end zone on third down.

The Patriots need a touchdown to tie it, and they are out of timeouts.

Facing heavy pressure on second-and-goal from the 16, Brady heaved a pass toward the goal line that was caught by cornerback Joe Haden, who made an incredible play to get both feet down while being absorbing hits from Rob Gronkowski and Julian Edelman.

Making matters worse for the Patriots, Edelman had to be helped off the field after suffering an apparent foot/ankle injury on the play.

The interception came after a holding call on Marcus Cannon that wiped out what would have been a Sony Michel carry to the 2-yard line.

Gronkowski finally got involved during the drive, catching his first two passes of the game for 13 and 8 yards.

Duron Harmon’s second interception of the afternoon came after Jaylen Samuels gashed the Patriots for another 25 yards on three consecutive carries. New England run defense continues to be a major problem.

Third quarter, 0:17, Steelers 14-10: The Patriots marched the ball down the field with authority but had to settle for a field goal after Julian Edelman was stopped just shy of the line to gain on a third-down screen pass.

New England leaned on the ground game during the 13-play, 63-yard drive, which took more than eight minutes off the clock.

Patriots are running well on this drive.

The Patriots committed three penalties on the drive (two false starts, one illegal formation) but also benefited from one called on the Steelers: a defensive pass interference call on Joe Haden that moved the chains on third-and-16.

Third quarter, 8:32, Steelers 14-7: Jason McCourty had all sorts of issues covering James Washington on the Steelers’ first possession of the second half, allowing a 32-yard completion down the right sideline and then missing a tackle on a 24-yard catch-and-run.

A 14-yard run by Jaylen Samuels (the Patriots’ defense hasn’t found a way to stop him yet) moved the Steelers inside New England’s 5-yard line, but a QB hit by Lawrence Guy on second down forced Ben Roethlisberger into an intentional grounding penalty, which bumped the Steelers back.

Vance McDonald’s toes landed just outside the field of play on third down, and much-maligned kicker Chris Boswell shanked a 32-yard field goal on the ensuing snap, keeping this a one-score game.

Third quarter, 13:00, Steelers 14-7: Josh Gordon had a perfect pass from Tom Brady bounce of his hands on third-and-6, resulting in a quick three-and-out to open the second half.

The Patriots are just 1-for-6 on third down.

Halftime, Steelers 14-7: Cordarrelle Patterson successfully kept his knees off the ground as he fought through two Steelers defenders and lunged toward the first down marker on third-and-9, but he wasn’t able to keep his shin from grazing the Heinz Field turf.

And that, officials determined upon video review, was enough to rule the wide receiver down just shy of the line to gain. The Patriots initially kept the offense on the field on fourth-and-inches before bringing the punt team out at the last possible moment.

Ben Roethlisberger then took a knee to end the half. Pittsburgh will kick off to begin the third quarter.

Patterson was the Patriots’ go-to guy on that final drive, converting a third down earlier in the series. He leads all New England receivers with three catches for 20 yards.

The Patriots are just 1 of 5 on third down, which has prevented them from sustaining drives. New England also hasn’t gotten much from its top offensive weapons:

The Patriots didn't get much from their top offensive weapons in that first half:

Second quarter, 3:03, Steelers 14-7: Ben Roethlisberger is really trying to pick on J.C. Jackson, but he’s not having much success thus far.

JuJu Smith-Schuster — Jackson’s primary assignment today — has just three catches on eight targets for 39 yards. Jackson allowed an 8-yard completion to Smith-Schuster on second-and-10 but forced an incompletion on third down, forcing the Steelers to punt.

Stephon Gilmore, who’s been beaten a few times in coverage, broke up a pass intended for Antonio Brown earlier in the drive.

Let’s see if the Patriots can tie this game up before halftime.

Second quarter, 5:13, Steelers 14-7: Three-and-out for the Patriots, who haven’t crossed the Steelers’ 45-yard line since their opening drive.

Second quarter, 6:01, Steelers 14-7: The Steelers easily escaped the shadow of their own goal line, beginning their drive with a 12-yard run by Stevan Ridley, a 24-yard completion to Antonio Brown and a 17-yard run by Jaylen Samuels.

Ben Roethlisberger nearly was sacked on the next play, however, and he badly overthrew JuJu Smith-Schuster on the one after that, resulting in an interception for Duron Harmon.

The Patriots really need to do something to repair their run defense, which already has allowed Samuels to rip off carries of 25, 17, 10 and 10 yards.

Second quarter, 8:17, Steelers 14-7: Thanks to a play that would make the Harlem Globetrotters proud, the Steelers will begin their next drive at their own 1-yard line.

Jonathan Jones and Rex Burkhead both dove across the goal line to keep Ryan Allen’s punt out of the end zone, allowing Ramon Humber to down it at the 1.

This is the most beautiful thing I've ever seen in my entire life pic.twitter.com/qrBJNQ7YwN

Mike Tomlin challenged the play, arguing that Burkhead’s foot had touched the line before he batted the ball, but the call stood.

Brown beat Jason McCourty for the score, which put Pittsburgh back in the lead.

First quarter, 1:18, 7-7: The Patriots picked up first downs on passes to Josh Gordon (19 yards) and James Develin (11 yards) but were forced to punt after Julian Edelman dropped a pass and Tom Brady misfired to James White while being pressured on third-and-8.

First quarter, 3:06, 7-7: Strong response by the Patriots’ defense, which got sacks on back-to-back plays from linebacker Kyle Van Noy and cornerback Jonathan Jones to force a Steelers punt.

First quarter, 6:48, 7-7: On a play that brought back memories of the 2016 AFC Championship Game, the Steelers left wide receiver Chris Hogan inconceivably wide open for a 63-yard touchdown that tied the score at seven apiece.

It was the first touchdown catch since Week 2 for Hogan, who was held without a reception last week in Miami.

Oh wow. He was WIDE open.

Three Steelers defenders zeroed in on Josh Gordon deep downfield, leaving Hogan all alone. He wasn’t touched as he sprinted the final 40 yards to paydirt.

First quarter, 8:40, Steelers 7-0: The Steelers opened the game with an 11-play, 75-yard drive that culminated in a 5-yard touchdown pass to tight end Vance McDonald on third-and-goal.

The biggest play of the drive came courtesy of rookie running back Jaylen Samuels, who ripped off a 25-yard run on the fifth play from scrimmage. It was the seventh 15-plus-yard run the Patriots have allowed in the last three games. Samuels also picked up 10 yards on a slant route later in the drive.

One of the big storylines this week concerned how the Patriots would cover Steelers receivers Antonio Brown and JuJu Smith-Schuster. So far, it’s been J.C. Jackson on Smith-Schuster, with Stephon Gilmore’ and Jason McCourty’s assignments changing play by play.

First quarter, 15:00, 0-0: The Steelers won the opening coin toss and elected to receive. Stephen Gostkowski will kick off to get things started here at a lively Heinz Field.

Running back James Conner officially is inactive for Pittsburgh.

Cornerback Keion Crossen, who has been inactive the last two weeks, is warming up with the active players. Rookie corner Duke Dawson also was not a part of the inactive workout group, so there’s a chance we could see his NFL debut today.

1:45 p.m.: Things are breaking in the Patriots’ favor up in Minnesota.

The Vikings currently are beating up on the Miami Dolphins (21-0 after one quarter), setting the stage for another potential division-clinching scenario here in Pittsburgh.

If the Dolphins lose and the Patriots win, New England would clinch its 10th consecutive AFC East title.

The Patriots haven’t lost to the Steelers since 2011, going 5-0 in their last five meetings.

12:15 p.m.: Patriots wide receiver Julian Edelman will pay tribute to the victims of the Pittsburgh synagogue shooting by wearing these special cleats today:

Edelman previously expressed his support for those affected by the shooting — which killed 11 and injured six in late October — by sporting an Israeli baseball cap after New England’s Week 9 win over the Green Bay Packers.

#Patriots owner Robert Kraft flew in to Pittsburgh early yesterday to visit the Tree of Life synagogue, where a gunman massacred 11 people. He then attended services at Rodef Shalom, and when invited to speak by the rabbi, he did. I?m told he even spoke partly in Hebrew. #bridges

10:40 a.m. ET: Postseason positioning will be on the line this afternoon as the New England Patriots visit the Pittsburgh Steelers at Heinz Field.

The Patriots need a win to keep pace with the Houston Texans, who took over the No. 2 spot in the AFC by beating the New York Jets on Saturday, and the Steelers are looking to snap a three-game losing streak that has them dangerously close to falling out of the playoff picture altogether.

New England is the healthiest its been all season, entering this game with just one player (linebacker Elandon Roberts) listed on the injury report. Tight end Dwayne Allen is expected to return to action after missing three games with a knee injury.

Tactically, it will be interesting to see if defensive tackle Danny Shelton is made active after back-to-back healthy scratches. The Patriots have been gashed in the run game with Shelton out, allowing an NFL-high 8.4 yards per carry over the last two games. The 9.0 yards per carry the Patriots allowed in last week’s last-second loss to the Miami Dolphins was the second-worst mark in franchise history.

Pittsburgh, meanwhile, likely will be without starting running back James Conner, who reportedly is expected to miss his second consecutive game with an ankle injury. That leaves rookie Jaylen Samuels and former Patriot Stevan Ridley as the Steelers’ primary rushing options.

The Steelers activated wide receiver Eli Rogers off the physically unable to perform list Saturday. He could take the place of slot receiver/return man Ryan Switzer, who is listed as questionable with a knee injury.

Click the links below for much more on this highly anticipated matchup, and be sure to check back here throughout the day for full pregame coverage. Kickoff is set for 4:25 p.m. ET.

Patriots vs. Steelers preview: What to watch for >>

Scouting the Steelers: 6 things to know >> 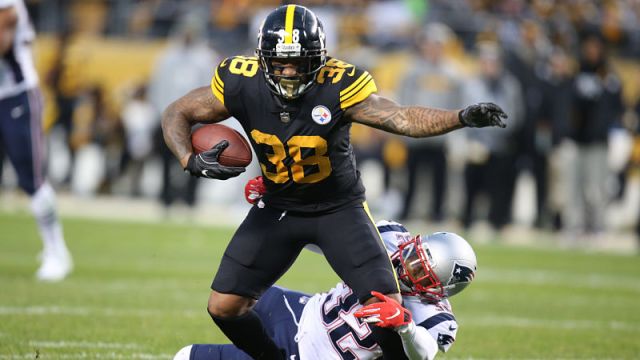 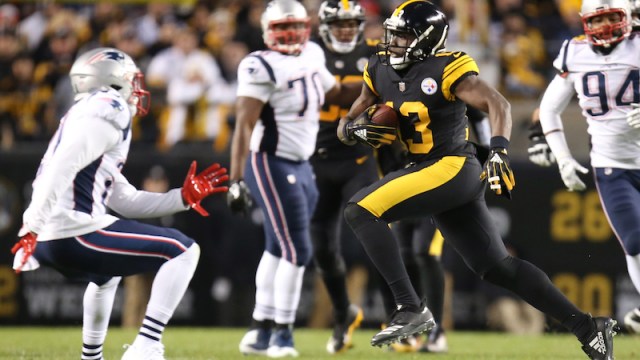