INDIANAPOLIS — In a storyline straight out of the movie “Draft Day,” there were certain rumors about North Carolina State quarterback Ryan Finley entering the NFL Scouting Combine.

No, there was nothing as specific as teammates not showing up to Finley’s birthday party or anything, but there were murmurs about Finley’s popularity among fellow players. They turned out to be old news.

Finley did have an awkward start to his career with the Wolfpack after transferring from Boise State.

Finley was the Broncos’ starting quarterback as a redshirt sophomore in 2015 before suffering a season-ending ankle injury. Brett Rypien, another rising 2019 quarterback prospect, took over the job and wasn’t going to let it go. Finley had graduated from Boise State in just three years, so he was free to transfer to another school without sitting out a year.

“It was a little different because the other guy, Jalan McClendon is a phenomenal quarterback,” center Garrett Bradbury said at the NFL Scouting Combine. “It was just assumed Jalan was going to be the starter, but they battled it out in fall camp, and the biggest way you can win over a team or show leadership is just production. You’ve just got to go out on the field and show you can play football. Ryan did that. He put his head down, went to work. He wasn’t into all the politics and stuff. All he wanted to do was play football. Once we got into the season, he started really playing well for us. We were like, ‘OK, this is our guy.’ Just trying to win games.”

NC State left tackle Tyler Jones also admitted it was “a little weird at first,” but it didn’t take long for Finley to gain support from his teammates.

“His first year here, he transferred in, and I think he was just trying to win a job,” NC State head coach Dave Doeren said. “Then that second year, I really felt like he became a leader to the receivers, to the O-line, to the running backs, tight ends. He was really trying to get outside his comfort zone and learn about guys and become friends with guys. And then in his third year, he kind of expanded that to the defensive side of the football and defensive staff even, saw him talking to other people that he didn’t the year before and growing in that role that he had earned. I don’t think he ever got comfortable being comfortable. He was unique.”

He was even named a captain during his senior season.

“He was a phenomenal teammate,” Bradbury said. “He was my roommate. Something about Ryan that is unique is his attention to detail and his preparation. Seeing it firsthand as his roommate, I know that no quarterbacks are going to have prepared like he has. He understands that what you do off the field translates on the field.

“That kid?s room, I never saw a single thing dirty in his room. Made his bed every single day, his diet, his sleep habits, recovery habits, it was good for me to learn from and watch, and try to mimic some myself. He treated this past year as a professional. That was good for me as a teammate to trust on Saturdays. He did everything from Sunday to Saturdays to prepare himself.”

NC State wide receiver Kelvin Harmon said he could have tough conversations with Finley. Jones said Finley made it easy for teammates to want to follow him.

“Anytime you’re going to be a part of a new group, you just want to come in and work as hard as you can, lead by example, show the people around you that you care, care about winning and kind of show that through your preparation,” Finley said. “And a big part for me was just showing my understanding of the offense. Because I had been in that offense for three years, so that was a big part of it.”

Finley currently is listed on NFLDraftScout as a projected fifth-rounder, but there’s a chance he goes much higher. He could even be the third quarterback drafted after Oklahoma’s Kyler Murray and Ohio State’s Dwayne Haskins.

“I think No. 1 is his intelligence,” Drinkwitz said. “I think he’s very smart and always prepared. Nothing the defense does is going to surprise him. I think No. 2 is his accuracy and anticipation when he throws the football. He throws it where his guys can catch it.”

Finley ranked 10th among FBS quarterbacks with his 67.4 completion percentage in 2018. He threw for 3,928 yards with 25 touchdowns and 11 interceptions with 8.1 yards per attempt. He isn’t known for having the strongest arm, but Drinkwitz, unprompted, rebutted that myth.

“I think there’s a misrepresentation that his arm strength is lacking,” Drinkwitz said. “I believe if you actually watch the film you’ll see throws that are further across the field than anything he’ll be asked to do in the NFL. It’s just that he throws a catchable ball, so it’s always a ball that’s easy to catch. He’s not trying to overthrow. We talk about the difference between being a passer and a thrower. He’s a true passer.

“And then the last thing is toughness. He is physically and mentally tough. He’s taken plenty of shots and keeps on getting up, and he’s mentally tough. When things aren’t going right, he’s able to stay steady and keep leading and keep playing.”

The New England Patriots are looking for Tom Brady’s successor. It’s worth noting they drafted another quarterback from Doeren’s system in 2016, when they selected Jacoby Brissett in the third round. Finley and Brissett have different styles of play, but the Patriots seemingly don’t have a type when it comes to drafting quarterbacks. Finley and Brissett do share leadership qualities, according to Doeren.

Finley would embrace sitting behind Brady for a few years.

“That would be unbelievable, just a chance to learn from them and that whole organization would be awesome,” Finley said. “So, I look forward to any opportunity I get but an opportunity like that would be pretty awesome just to learn and grown and see how things are done.”

And from the sounds of things, he might already be following the TB12 diet.

“I think he’s maybe as mature as any player I’ve had when it comes to taking care of his body and having a routine, watching film at a certain time of day, going through the steps that he needs to feel good and be mentally well,” Doeren said.

It’s nearly impossible to predict who the Patriots will draft in any given year, but Finley has many of the attributes New England values in players. And if he had to replace Brady one day, he has experience wading the waters of an awkward situation to win over teammates. 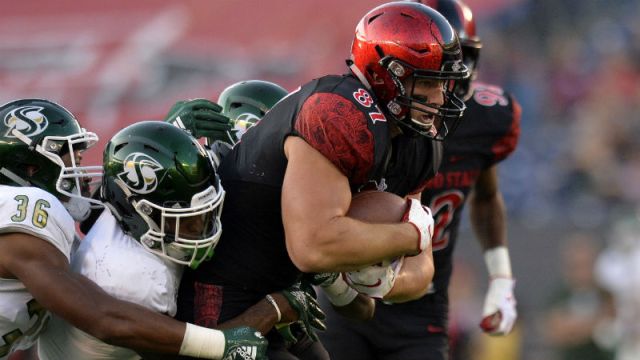 Could This Water Polo Goalie-Turned-Tight End Be Patriots’ Latest Project? 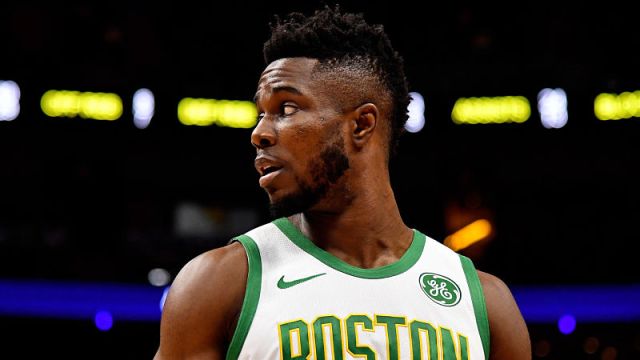