That’s a wrap for open training camp practices this summer.

The New England Patriots put a bow on practices open to the media and fans Thursday in Tennessee. From here on out, everything is closed to the public, and the Patriots can get down to their real business in secrecy.

Real quickly, the players who helped themselves out most this summer were quarterback Jarrett Stidham, wide receiver Jakobi Meyers, pass rusher Shilique Calhoun and cornerbacks Joejuan Williams and Keion Crossen.

Who has a better rookie season. Harry or Meyers?
— @LiveStrongRich
That’s the $8.3 million (the difference in the two players’ contracts) question.

I might be crazy, but as of today, I’m going with the undrafted free agent, Meyers. He’s been the better player in training camp, and he had a monster first preseason game.

First-round pick N’Keal Harry already has suffered two injuries. And even before he went down, he wasn’t running with the Patriots’ first-team offense. Meyers has stayed healthy throughout training camp, and he’s been working with the starters for weeks.

I think Harry and Meyers wind up having very similar seasons. I’d project both players at around 450 to 500 receiving yards.

Do you think they?d look into Treadwell? #maildoug
— @ChefdDds89
I wouldn’t be shocked if the Patriots added Laquon Treadwell, who reportedly is available in a trade from the Minnesota Vikings. I think it would depend on the health of their current group, though. I’m not sure how long they can go with just six healthy wide receivers in Meyers, Braxton Berrios, Gunner Olszewski, Dontrelle Inman, Damoun Patterson and Ryan Davis.

If Phillip Dorsett, N’Keal Harry and Maurice Harris can return soon, then I’m not sure if Treadwell is an upgrade over the current group. It also depends on when Julian Edelman, Demaryius Thomas and Cameron Meredith can return off of reserve lists.

I certainly wouldn’t give up much for Treadwell. I might even wait to see if the Vikings waive him. Treadwell isn’t cheap at $1.8 million this season. He was the 23rd overall pick three years ago, but he has just 56 catches for 517 yards with one touchdown in 40 career games.

TE?s appear to be the weakest link on the team. What position group would you rate as the strongest, DB?s, LB?s, OL? Also, as a Pats fan stuck in the middle of Bills country I refuse to buy Bud Light Bills cans during the season. Can anyone help me get the Pats cans? #MailDoug
— @lc_3344
Can I pick quarterbacks? It’s tough to do much better than Tom Brady as your No. 1, Brian Hoyer as the No. 2 and Stidham as the developmental No. 3.

After that, I’d say cornerback. The Patriots go seven deep at that position with some pretty impressive players. It will be difficult to trim that group down from Stephon Gilmore, Jason McCourty, Jonathan Jones, JC Jackson, Joejuan Williams, Crossen and Duke Dawson.

And can someone help out Liam?

I get no player can fill the loss of @RobGronkowski but who do you think will make the biggest impact as TE this season for the Pats?
— @KMDiGio
Ben Watson. It’s not ideal, but I think he’ll be the top option when he comes back from a four-game suspension.

If healthy, I think Matt LaCosse will fill in until Week 5, and I could see Ryan Izzo having a blocking role similar to the spot Dwayne Allen, Matthew Mulligan and Michael Hoomanawanui filled in the past.

I still don’t hate the idea of keeping Andrew Beck as a second, more athletic fullback over an extra tight end.

When do you think Demaryius Thomas is back catching passes?
— @realitla4
It could be earlier than we think. Thomas was doing some pretty impressive full-speed sprints with some resistance training Thursday before practice. He’s been around the team a lot and took trips to Detroit and Tennessee for joint practices with the Lions and Titans.

Thomas didn’t look like the same player in 2018 as he did in his heyday, but he would be a big boost to the Patriots’ current receiver corps. I don’t see why he couldn’t be Brandon LaFell in 2014.

Will Sony be used as a featured back? Or RB by committee more likely?
— @LifeSports7
As long as James White is involved, it’s going to be somewhat of a committee.

I do think Michel will be heavily featured on first and second down and have a bigger role as a pass-catcher this season. Expect a decent amount of two-running back sets from the Patriots’ offense to fill the void left behind by Rob Gronkowski.

At this point what is the starting base defense and nickle defense?
— @JaMarc0
A base 3-4 would probably be:

A nickel look would probably be:

The third-down defense would be:

And it seems like Harris is dealing with a minor hand injury, but he’s been practicing the last couple of days. I’m interested to see him in a preseason game. It’s tough to judge a running back in practice.

How many WRs make the team?
— @EricJsaint
I’d have six, including Matthew Slater.

Currently, it comes down to Maurice Harris and Braxton Berrios. A return by Thomas or Meredith could bump those guys, and possibly even Dorsett, off the roster.

After today’s practice, would you put Dawson on the 53?
— @pereira_report
No, but if he can close out the summer as well as he played Thursday, then he could still stay on.

Crossen has had a better overall camp than Dawson, plus he actually played last year. Dawson was redshirted and clearly behind Crossen on the depth chart.

He has some ground to still make up.

After Edelman, who leads the Patriots this year in receiving yards?
— @BrysonButcher10
My best bet would be White.

Can special teamers such as Slater and Ebner play as long as Brady given their limited time actually being on the field?
— @ejlinehan
No, because the position requires so much more speed.

What’s for lunch?
— @Mike_PerSources
Titans gave us a turkey pot pie pasta dish. Kind of an odd choice when it’s 90 degrees outside, but it was tasty.

I’ll be having Hattie B’s for dinner.

Should we be worried about Wynn?
— @OFFICIAL_TRUCK
I think Isaiah Wynn will be just fine at left tackle.

Is Calhoun a lock for the 53 man roster in your opinion?
— @BurgessNFries
No, but I think he’ll make my next 53-man roster projection.

Eleven Things We Learned From Patriots’ Joint Practices With Titans 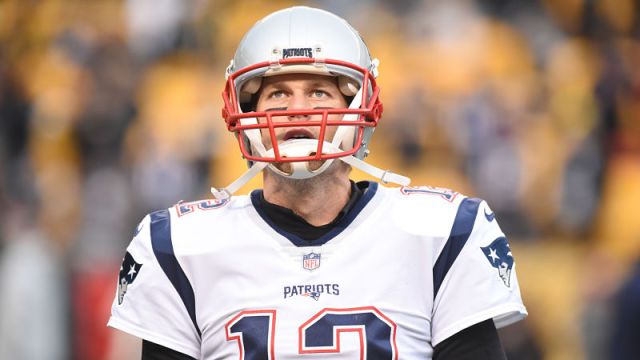