NASHVILLE, Tenn. — In the words of Dont’a Hightower, there ain’t no sunshine like Tennessee sunshine.

Here are 11 things we learned from watching those sessions, which marked the official end of Patriots training camp:

1. The Patriots are in rough shape at receiver. Their roster currently features as many injured wideouts (six) as healthy ones, with N’Keal Harry, Maurice Harris, Phillip Dorsett, Julian Edelman, Demaryius Thomas and Cameron Meredith all sitting out Thursday. This attrition resulted in some seldom-seen personnel groupings, as reserves Gunner Olszewski, Dontrelle Inman and Damoun Patterson all saw significant first-team reps. Braxton Berrios also continued to run with the starting offense and was targeted a team-high 10 times in 11-on-11 drills, catching five.

2. We’re still very high on Jakobi Meyers, who continues to look like an undrafted gem. The rookie wideout kept up his breakout summer with two more strong showings, catching six passes on eight targets in 11-on-11 drills and turning in a few impressive reps in 1-on-1s and 7-on-7s. He’s been the best receiver in camp by a wide margin.

4. Isaiah Wynn is on the right track. The 2018 first-rounder continued to rotate with Dan Skipper at left tackle but said Wednesday he’s feeling 100 percent and will be prepared to start in Week 1. It remains unclear whether Wynn, who tore his Achilles exactly one year ago Friday, will play Saturday night. The sweltering Nashville heat (temperatures hit 90 both days) appeared to take a toll on the 6-foot-9 Skipper, who was seen vomiting during both practices.

5. Demaryius Thomas seems to be progressing nicely. The former Denver Broncos star has yet to make his Patriots practice debut, but he was moving well Thursday as he ran through a gamut of conditioning drills. These drills included a series of full-speed sprints with a trainer tethered to his back. Promising signs for a 31-year-old who tore his Achilles in December.

6. Duke Dawson finally showed some signs of life. Thursday’s practice was the best of camp for the second-year Florida product, who broke up two passes and forced another incompletion with tight coverage. Asked about Dawson before practice, Bill Belichick said he’s “way ahead of where he was last year.” Whether he’s improved enough to make the 53-man roster, though, is another story. Dawson was brutal in Detroit — both in joint practices with the Lions and in the Patriots’ preseason opener — and has lagged far behind the likes of Jonathan Jones and Keion Crossen all summer. He still has a lot of ground to make up over these next two weeks.

7. J.C. Jackson has been one of the Patriots’ top defensive playmakers throughout camp, and that persisted this week. He intercepted two passes Wednesday — including a pick-six against Ryan Tannehill in 11-on-11s — and nearly pulled in another on Thursday. His three total interceptions in camp tied Obi Melifonwu for tops on the team, and his nine pass breakups ranked second behind Crossen (10). Despite this production, Jackson has hardly seen any reps with the first-team defense, which might be the Patriots’ way of keeping his ego in check. Jason McCourty and Stephon Gilmore were the starting outside corners in all 15 training camp practices.

8. Joejuan Williams has come around after an inauspicious start to camp. The rookie cornerback and Nashville native broke up two more passes Thursday to raise his camp total to eight, all of which came over the Patriots’ final eight competitive practices.

9. The Patriots moved Chase Winovich around on defense, using him as a stand-up outside linebacker, a hand-in-the-dirt defensive end and, in a new wrinkle, at nose guard in the 1-5 front the team has been using on third downs and in obvious passing situations. Winovich also took one rep with the first-team defense Thursday (he’s been a second-teamer all summer) but jumped offsides and had to run a penalty lap. It’ll be interesting to see how New England deploys its high-energy third-round draft pick, who caused all sorts of problems for the Lions’ O-line last week.

10. Thursday’s session was a rough one for Jarrett Stidham, who completed just 1 of 6 passes during his lone round of 11-on-11s. Meanwhile, Brian Hoyer went 7-for-8 in 11s — with only one completion to a running back — after going 6-for-8 the previous day. Stidham has shown great potential this summer and appears much further along in his development than Patriots rookie quarterbacks typically are this point in their careers, but Hoyer still has a pretty clear edge in the battle for the top backup job.

11. Titans coach Mike Vrabel brings out the best in Brady from a trash-talking standpoint. Watching the two former teammates jaw at each other between reps was highly entertaining. 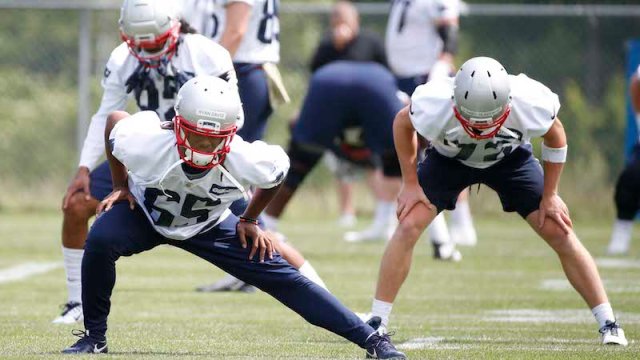