Jalen Hurts To Patriots? How Mobile Quarterback Would Fit In New England - NESN.com Skip to content

In the two weeks leading up to the 2020 NFL Draft, NESN.com will be taking a closer look at this year’s quarterback class and how each player could fit with the New England Patriots. First up, Oklahoma’s Jalen Hurts.

Analysis: Spoiler alert: All things considered, Hurts is our favorite quarterback fit in the 2020 NFL Draft for the Patriots.

That’s not to say he’s the best quarterback in the draft nor the best fit for the Patriots’ offense. But for where New England could likely draft Hurts — which is probably two rounds later than players like Jordan Love and maybe even Jacob Eason — we like his potential to help the team more than any other realistic QB in the draft.

In other words, it would be smarter to spend a third-round pick on Hurts rather than a first on Love or Eason in order to fill other needs across the Patriots’ roster.

Hurts began his college career at Alabama but was benched for Tua Tagovailoa at halftime of the 2018 College Football Playoff National Championship Game in his sophomore season. Hurts stuck around for one more season before transferring to Oklahoma, where he basically looked like an entirely different quarterback.

Hurts’ passer rating went from 148.8 to 191.2. His completion percentage skyrocketed from 62.9 to 69.7 and his yards per attempt jumped from 8.0 to 11.3. The team that drafts Hurts is banking on him being able to translate from Lincoln Riley’s offense to the NFL as well or better than Baker Mayfield and Kyler Murray.

Hurts, like both of those guys, is undersized and mobile. He’s a better athlete than Mayfield, but he’s not as fast as Murray. But Hurts is so mobile that even if he doesn’t win the job as a starting quarterback, he could be used in creative packages the same way Taysom Hill is utilized with the New Orleans Saints or how Lamar Jackson was deployed early in his rookie season with the Baltimore Ravens.

The 21-year-old is a quarterback first, however. His accuracy and ball-security are probably his biggest strengths beyond his athleticism. He ranked ninth among college quarterbacks in Pro Football Focus’ adjusted completion percentage. He was 33-of-66 with 10 touchdowns and three interceptions on deep passes and was 66-of-91 with nine touchdowns and four interceptions in the intermediate part of the field.

Hurts was 12th in passer rating while pressured, going 56-of-103 with nine touchdowns and two interceptions. There are definitely times when he bails too early, however, and his accuracy drops on rollouts.

The biggest knock on Hurts is his indecisiveness. He holds onto the ball too long, which might not fly in the NFL and especially in the Patriots’ offense. It took Hurts, on average, 3.08 seconds to throw, per PFF. Here’s how that compares to the rest of the top quarterback prospects:

Hurts has the slowest time to throw of any quarterback in PFF’s draft guide. Tom Brady took 2.61 seconds to throw in the Patriots’ offense last season. Jackson had the slowest release time in the NFL last season at 3.05 seconds. The Patriots would have to tweak their offense to fit Hurts, but head coach Bill Belichick has already expressed a willingness to do that.

The dual-threat QB has impressive deep-ball accuracy, but some of his longer throws that should have more zip can start to sail. Hurts’ intangibles also are a strength. He handled the benching with maturity and came out of it as a better quarterback.

With Jackson’s success combined with the hype surrounding Hill, there’s a possibility Hurts is overdrafted next week. But if he’s available in the third round, and if the Patriots want a quarterback to push Jarrett Stidham for a starting job, Hurts has more upside than players like Fromm and Eason.

Home With NESN Cribs Edition: Steve Lyons Gives Us Inside Look In Home 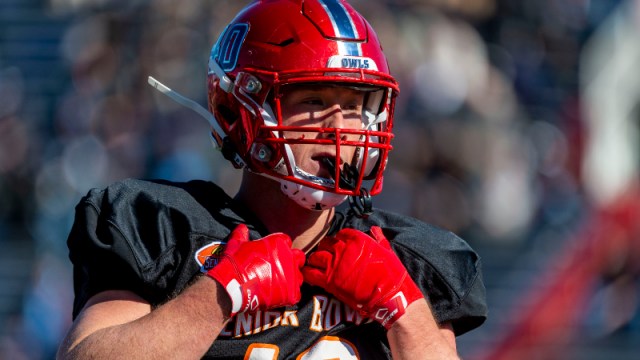