The New England Patriots have their eye on an early-round offensive line prospect ahead of the 2020 NFL Draft.

According to a report Tuesday from SB Nation’s Justin Melo, the Patriots are among the dozen teams that have held FaceTime meetings with Louisiana-Lafayette O-lineman Robert Hunt.

Hunt was a four-year starter for the Ragin’ Cajuns, primarily playing left guard for his first two seasons before switching to right tackle in 2018. He projects as a guard at the NFL level, with The Athletic’s Dane Brugler ranking him as the top guard in this year’s draft class.

Multiple scouting reports compliment Hunt’s “nastiness” as a run blocker. He held up well in pass protection, as well, allowing just two sacks and 11 total pressures in 605 pass-block snaps over the last two seasons, per Pro Football Focus, after struggling in that area in 2017.

Hunt suffered a groin injury that caused him to miss the second half of last season and prevented him from working out at the NFL Scouting Combine. He projects as a Day 2 pick.

“Overall, Hunt needs to clean up some bad habits from a mechanical standpoint,” Brugler wrote in his 2020 draft guide, “but his quiet feet, loud hands and competitive nature are NFL starting-level traits, projecting best inside at guard.”

At 6-foot-5, 323 pounds, Hunt is larger than most Patriots guards, who typically weigh between 300 and 310 pounds. It’s possible they view him as a tackle, as was the case with tweener Isaiah Wynn in 2018. 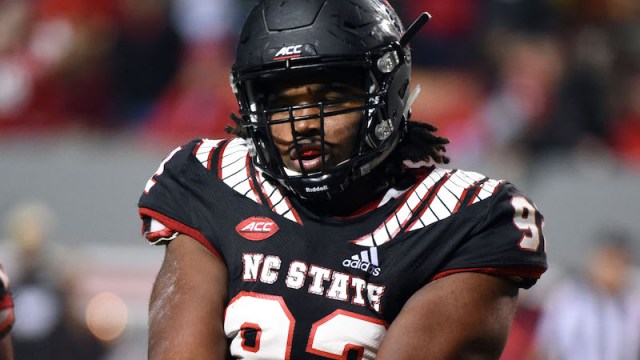 Defensive Tackle Prospect Reveals He Met With Patriots Over FaceTime