FOXBORO, Mass. — A win Sunday would have all but clinched a division title for Mac Jones and the New England Patriots. Now, that title is Buffalo’s to lose.

The Bills defeated the Patriots 33-21 at Gillette Stadium to exact revenge for New England’s Week 13 win in Orchard Park, N.Y., and seize control of the AFC East.

As he did in last week’s loss in Indianapolis, Jones led two second-half touchdown drives but couldn’t overcome an uninspiring start. The rookie quarterback completed 14 of 32 passes for 145 yards and no touchdowns with two interceptions.

Jones set new career lows in completion percentage (43.8%), yards per attempt (4.5) and passer rating (31.4) as the 9-6 Patriots fell to sixth place in the AFC playoff standings.

— New England’s passing game was nearly nonexistent in the first half. Jones went just 5-for-13 over the first two quarters, and none of his completions traveled more than 6 yards downfield in the air.

The rookie closed out the half with incompletions on each of his final six passes — including one that was wiped out by a roughing the passer penalty — and eight of his last nine. The Patriots crossed midfield just once before halftime.

— Jones was not sharp early, but he also wasn’t helped by his receivers.

N’Keal Harry had an ugly second-quarter drop on what should have been a 15-plus yard gain. One play later, Jones tried to force a pass to the big-bodied wideout that was tipped by linebacker A.J Klein and intercepted by safety Micah Hyde.

Running back Brandon Bolden also opened the Patriots’ final drive before halftime with a drop over the middle.

The Patriots activated wideout Kendrick Bourne off the reserve/COVID-19 list Saturday, but he wasn’t targeted until the fourth quarter and saw a lighter workload than anticipated after sitting out all three practices this week. Tight end Hunter Henry also didn’t catch his first pass until the final frame, though Jones missed him on a deep ball late in the first half.

— The Patriots’ lone touchdown drive in the first half featured 13 plays and just three completions: a quick screen to Harry that picked up five yards, a 13-yarder to Jakobi Meyers and a hookup with fullback Jakob Johnson that gained nine. Jones mostly served as a facilitator for New England’s ball-carriers, especially on the final two plays of that possession.

No one would classify Jones as a mobile quarterback, but offensive coordinator Josh McDaniels dialed up a speed option on fourth-and-1, with Jones dashing to his right before pitching to Damien Harris for 12 yards and a first down.

One play later, Harris galloped 16 yards into the end zone off a misdirection toss.

— Jones played a much more prominent role in New England’s second scoring drive, which spanned 14 plays, 75 yards and 7:21 in the third quarter.

After Harris opened the drive with a 31-yard run, Jones went 5-for-7 for 45 yards, including third-down completions to Harry, Meyers and Bolden. He also had this one on fourth down to Meyers to set up another Harris touchdown:

Jones also converted a fourth down with his legs earlier in the series, pushing the pile for 6 yards on fourth-and-1.

Even that drive featured a dicey moment from the young QB, though. After hitting Harry for a first down on a tunnel screen, Jones tried to fit a deep ball to Harry into double coverage despite having Meyers open underneath. The pass was nearly intercepted, but the Bills defender couldn?t hang on.

— Head coach Bill Belichick was much more aggressive on fourth down than usual.

Entering Sunday, the Patriots ranked 31st in the NFL in fourth-down conversion attempts (11) and tied for 29th in successful conversions (six). They went 5-for-6 against Buffalo, converting twice on each of their first two touchdown drives.

They were much less effective on third down, going a season-worst 1-for-10. In two games against Buffalo this season, the Patriots converted just 3 of 22 third downs (13.6%).

The Patriots, who trailed 26-14 at the time, called just three running plays on that possession, which covered 75 yards in 10 plays. It featured perhaps Jones’ best throw of the day — a 21-yard rainbow to Meyers with a pass rusher in his face — plus completions of nine yards to Henry and 13 yards to Bourne and a 9-yard scramble that brought New England into the red zone.

Harris, who missed last week’s game with a hamstring injury, ran well in a losing effort, finishing with 103 yards and three scores and averaging 5.7 yards per carry.

— Bills defenders twice were flagged for late hits on Jones, but neither penalty was enforced.

The first, on veteran edge rusher Jerry Hughes for dragging the QB down by his nameplate out of bounds, was rescinded after a referee conference. Offensive tackle Trent Brown then was flagged for unsportsmanlike conduct for jawing with Buffalo players after the play, helping derail the Patriots’ final drive of the first half.

Later, Milano was penalized for tackling Jones while he slid on the aforementioned 9-yard scramble. But center David Andrews picked up his own unsportsmanlike conduct foul on the post-whistle shoving match that ensued, resulting in penalties that offset.

— Overall, this was a forgettable performance from Jones. But he wasn’t the biggest issue for New England. That was a defense that allowed Buffalo’s Josh Allen-led offense to move the ball inside the Patriots’ 15-yard line on all seven of its possessions, excluding a pair of kneeldowns.

After Harris’ third touchdown cut the Patriots’ deficit to 26-21, the Bills responded with a 13-play, 75-yard touchdown drive to put the game away.

Jones’ second interception came on a desperation heave to Meyers in the final seconds. 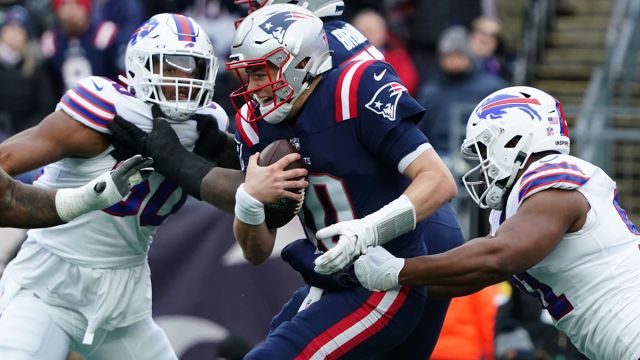 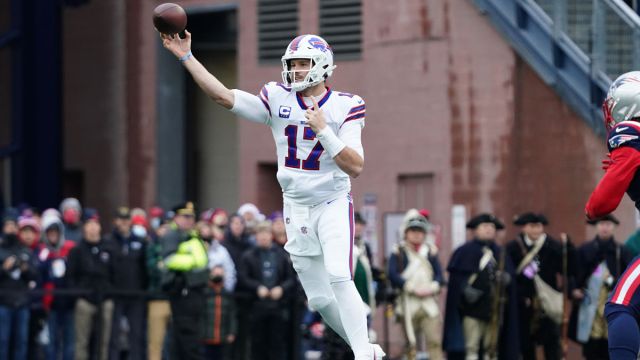