Midway through the fourth quarter Friday night with the Boston Celtics trying to hold on to a lead, the New Orleans Pelicans made one of the several pushes they engineered throughout the game.

The Pelicans went on a 7-0 run in a matter of 42 seconds to pull within 98-92 with 5:54 remaining. They clearly had momentum with their home fans gaining life and most seasoned coaches would have called a timeout at that moment, especially on the road.

But Celtics interim head coach Joe Mazzulla stayed the course, not pressured one bit into calling a timeout.

Mazzulla’s patience and trust in his players paid off with Grant Williams quickly answering with a corner 3-pointer and Al Horford flushing home a dunk, which ironically forced Pelicans coach Willie Green to call for a timeout.

Holding onto timeouts, particularly during runs by opposing teams, is a strategy Mazzulla has employed throughout the early part of the season. It’s certainly different compared to other coaches, but it’s proven effective, too, as was the case against the Pelicans with the Celtics remaining poised to go on to topple New Orleans, 117-109, for their ninth straight victory.

“I think you have to go through that as a team,” Mazzulla told reporters, as seen on NBC Sports Boston postgame coverage. “You have to build an awareness for your team to what’s going on. And sometimes, I like the fact that we have to execute through a run instead of calling a timeout through a run.

“It’s a feel thing. There are times when you’re going to have to do it. But in order for us to be a great team, we have to handle those situations and we got to build an awareness and we got to know how to execute. Quite honestly, I’ve watched a lot of timeouts where you call one and then nothing good happens after the timeout. So, it’s like a 50-50 shot if the timeout is going to work.”

How Mazzulla uses timeouts is striking for Derrick White since he played four-plus seasons in San Antonio for Gregg Popovich, who has a very quick trigger calling timeouts.

“I think Pop takes the fastest timeouts in the league,” White told reporters after his standout performance of 26 points in the win, as seen on NBC Sports Boston postgame coverage. “It’s not unnormal to take a timeout 2-0. Just understanding the flow, trust. We talk about it all the time is just trust, and I think he trusts us a lot to withstand those runs and make the right play. There’s a lot of trust both ways and we just got to go out there and execute.” 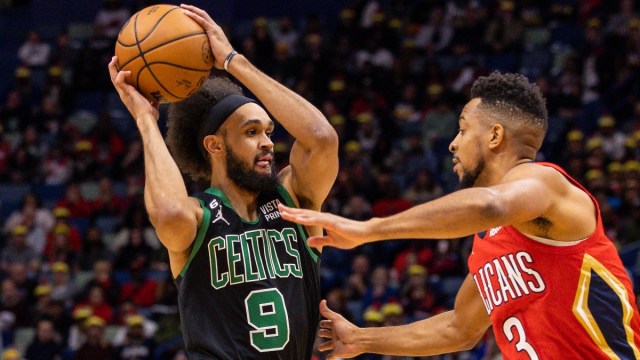