During his time with the Boston Celtics front office, serving as president of basketball operations for 18 years, current Utah Jazz CEO Danny Ainge had quite the run.

In 2003, Ainge made his debut as an executive with Boston following their 49-33 season finish which ended with an Eastern Conference finals loss against the then New Jersey Nets, finishing the stint with two NBA Finals appearances and Banner 17 in 2008, Ainge did anything but come up short in Boston.

However, Ainge’s run with the Celtics front office wasn’t perfect. There were still a few noteworthy bumps and bruises, that can’t go without recognition, along the way.

With that being said, here are five of the worst moves made by Ainge during his time with the Celtics front office:

Rajon Rondo Trade (2014)
Perhaps the most sought-after move made by Ainge, yet still worthy of an acknowledgment as one of his worst displays as an NBA executive.

With the famous Celtics “Big Three” trio of Paul Pierce, Kevin Garnett, and Ray Allen officially reaching its full end following the first round of the 2012-13 NBA playoffs — which saw Boston suffer first-round elimination against the New York Knicks — there were zero reasons to keep Rondo around. Considering his time in a Celtics uniform turned out to be the golden years of his career, Rondo’s flashy double-double performances were due in large part to playing alongside a trio of Hall-of-Famers in Boston. In fact, after Pierce and Garnett were packaged in the unforgettable draft pick-filled blockbuster trade with the Nets, Rondo never again made an All-Star appearance — and he was 27 years old at the time.

The intentions of Ainge and the organization were as clear as day: rebuild time. The Celtics were far from a team built for contention in 2014, featuring a roster with Avery Bradley, Jeff Green, Brandon Bass, Gerald Wallace and first-year head coach Brad Stevens.

There was no question that the Celtics only shot at rebuilding would be through the draft, as Ainge himself knew. Therefore, prolonging Rondo’s inevitable departure from Boston made little-to-no sense. Rondo kicked off the 2013-14 campaign injured, yet with an aging roster foundation, Ainge not preparing was inexcusable. During the NBA trade deadline in 2014, Ainge instead elected to hold onto Rondo — evidently allowing the point guard’s value to further plummet before eventually pulling the trigger later than necessary.

“I don’t have a problem with somebody calling me even when I don’t think it’s a reasonable offer,” Ainge said, according to the Boston Herald. “… But what I do have issues with is people that call with really no intention of being able to say they called. Then the next thing you know, as soon as they hang up the phone, there’s rumors that they’re trying to get Rondo. So it becomes a story that’s talked about for seven days, when in fact they never really did want Rondo and we definitely had no interest in getting rid of Rondo.”

In December of 2014, Ainge made the move, dealing Rondo to the Dallas Mavericks in an underwhelming fashion. The Celtics acquired Brandan Wright — who never played with Boston, Jae Crowder — an inconsistent role player at best with Boston, Jameer Nelson — who played six games with Boston, and a few draft selections (one first-rounder and one second-rounder).

Not going on the highlight-reel of the Trader Danny era.

Avery Bradley Contract Extension (2014)
After showing very few reasons for earning such a contract, Ainge signed Bradley to a four-year extension with the Celtics worth $32 million dollars.

Relative to the NBA market in 2022, this seems like pennies, right?

At the time, Bradley, a defensive-minded shooting guard who brought little to no reliability on the offense end, was delivered to Boston by Ainge in hopes of sustaining the loss of Allen who began the end of “The Big Three” era by signing with the Heat.

To suggest Bradley could ever fill Allen’s shoes was outright laughable.

Bradley struggled early with shoulder issues, causing him to miss a total of 107 games within the first four seasons of his NBA career. An overall overrated defensive guard who aside from having the ability to knock down an outside shot here and there, has zero impact on the perimeter.

During his seven-year run with the Celtics, Bradley averaged a misleading 12.1 points with 3.1 rebounds and 1.7 assists before proceeding to bounce around the league and never replicate that level of production again.

“Yet, this trade blossomed into a tremendous all-time missed opportunity for the Celtics to land one of the greatest talents to ever take the NBA floor.”

Drafting Fab Melo (2012)
Drafting talent wasn’t Ainge’s strong suit. Yeah, he’s shown that when the odds fall in his favor as they did in 2016 with Jaylen Brown and 2017 with Jayson Tatum. However, when finding that hidden gem, Ainge was as blind as can be.

With the No. 22 overall pick in the NBA draft, Ainge selected one of the all-time biggest draft busts in league history. The Celtics selected Melo, a Syracuse standout who was named the Big East Defensive Player of the Year as a sophomore that same year. Yet, Ainge passed on a few notable names passed on who could’ve been more than serviceable for years — such as:

Players who, at the time, would’ve blossomed in future seasons with the Celtics.

Melo’s NBA career lasted just one year, playing six career games with the Celtics while averaging 1.2 points, 0.5 rebounds and 0.3 assists. In 33 games with Boston’s G-League affiliate the Maine Celtics, Melo averaged 9.8 points and six rebounds per game on 51.5% shooting. The 7-footer was traded to the Memphis Grizzlies in 2013, then released to never make another appearance in an NBA contest.

Kendrick Perkins Trade (2011)
This move is conflicting for a few reasons.

In 2011, the Celtics traded center Perkins along with guard Nate Robinson to the Oklahoma City Thunder in exchange for Jeff Green, Nenad Krstic and a 2012 first-round draft pick — which, ironically enough, was used to draft Melo.

Green, who Ainge initially drafted in 2007 when the Celtics’ chips didn’t fall their way at the lottery with Kevin Durant coming out of the University of Texas, dealt with a heart condition.

On one hand, the Celtics proceeded to display a need for that same presence that Perkins brought on a night-to-night basis. Lacking in the front court, with the Celtics still well in contention with all members of “The Big Three” still on the roster — and still playing at an All-Star level. Removing Perkins from the equation didn’t make very much sense.

On the other hand, Ainge gave the Celtics one of the most memorable all-time buzzer-beaters with Green nailing a shot against the Miami Heat in 2013 — over LeBron James too.

You can re-watch that epic game-winner here.

Green’s tenure with the Celtics was the epitome of inconsistency. On several occasions, Green displayed freakish athletic abilities, scoring 43 points on March 18, 2013, against that three-headed super team Heat squad. Yet, those were about as common from Green as a solar eclipse. His highest scoring average in Boston — 17.6 points per game — is among the most misleading averages you’ll find.

Trading up to draft Kelly Olynyk ahead of Giannis Antetokounmpo (2013)
If it wasn’t clear by now, Ainge’s ability to draft anywhere beyond the top five, stinks.

This couldn’t be any more evident than on draft night in 2013. The Celtics, who entered the night with the 16th overall selection, made a trade in order to get a lottery selection. Yet, this trade blossomed into a tremendous all-time missed opportunity for the Celtics to land one of the greatest talents to ever take the NBA floor.

Ainge, through a trade with the Mavericks, selected Olynyk out of Gonzaga at No. 13… Which came two spots ahead of Antetokounmpo, who has two league MVP awards, an NBA Finals title and six All-Star appearances on his resume while only 27 years of age.

Olynyk, on the other hand, will always be remembered for two things as a Celtic:

— Scoring 27 points with five rebounds and four assists in Game 7 against the Washington Wizards to advance to the Eastern Conference finals in 2017.

— Standing behind former New England Patriots quarterback Tom Brady in that iconic photo while the Celtics were recruiting current Nets star forward Kevin Durant, in the Hamptons in 2016.

Olynyk wrapped up his four-year run with the Celtics, averaging 9.5 points, 4.7 rebounds and 1.7 assists.

Now, Olynyk and Ainge are reunited, with the Jazz through an offseason trade.

A pretty self-explanatory blunder that, with time, further speaks volumes. 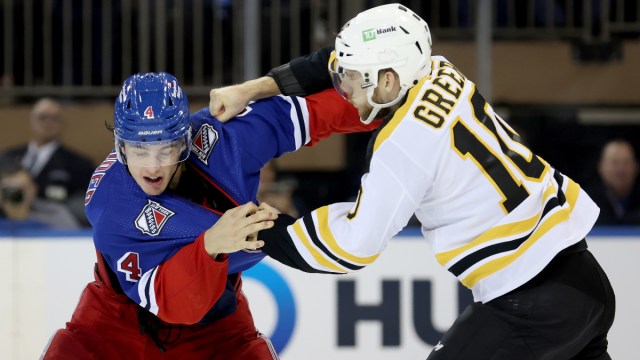 Bruins Notes: Boston’s Seventh Straight Win Fueled By ‘Fight For Each Other’ 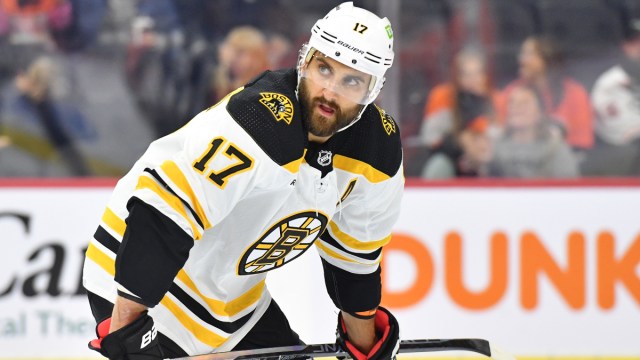