FOXBORO, Mass. — Clad in their red throwback uniforms, the New England Patriots put on a performance Thursday night that brought back memories of the past.

For the third consecutive meeting, the Patriots were run over by the AFC East rival Buffalo Bills, losing 24-10 at Gillette Stadium. The 9-3 Bills move into first place in the division (pending the result of Sunday’s Miami Dolphins game) while the 6-6 Patriots continue to fall further behind in the AFC playoff race.

1. Allen, Diggs impose their will again
Safety Adrian Phillips said this week that the Patriots had their faces kicked in by the Bills in last year’s 47-17 playoff loss. The kicks in this one weren’t as swift or forceful, but they were ruthlessly effective nonetheless.

Josh Allen didn’t kill the Patriots with scrambles and quarterback runs the way he did in these teams’ previous two meetings, but he made several truly remarkable plays with his arm, including a mind-bending second-quarter touchdown pass to Gabriel Davis while under heavy pressure from linebacker Mack Wilson.

Allen also threw a touchdown pass to All-Pro receiver Stefon Diggs, for whom the Patriots’ secondary simply had no answer. New England tried to match up top cornerback Jonathan Jones against Diggs when they deployed man coverage, but the wideout decisively won that best-on-best battle, beating Jones on his touchdown and multiple third-down conversions, including one on which Jones was flagged for defensive holding. Jones also allowed third-down completions to Isaiah McKenzie and Khalil Shakir.

One week after Minnesota’s Justin Jefferson posted a 9-139-1 receiving line against the Patriots, Diggs finished with seven catches on nine targets for 92 yards and a score. New England will face elite wideouts in each of its final five games, as well:

Playing without their other starting corner, Jalen Mills, who was inactive with a groin injury, the Patriots flooded the field with six or more defensive backs for much of the game, but they couldn’t stop Buffalo’s methodically churning offense. Allen finished 22-of-33 for 223 yards and two touchdowns with no interceptions, and the Bills rushed for 132 yards.

2. Offense crashes back to earth
The offensive improvement New England showed a week ago in Minnesota vanished Thursday night.

The Patriots went three-and-out on four of their first five possessions, getting a long touchdown reception by rookie cornerback Marcus Jones (yes, you read that correctly; more on him below) but little else in the opening half. They did not run a play inside the Bills’ red zone until the 3:34 mark of the fourth quarter. They went 3-for-12 on third down, and two of those conversions came on their final drive, down 17 late in the fourth quarter.

Playing behind an offensive line that had fourth-stringer Conor McDermott at right tackle and a sick Trent Brown at left tackle, Mac Jones threw for nearly 200 yards fewer than he did against the Vikings, going 22-for-36 for 195 yards and one touchdown. He extended his streak of games without an interception to four, but he had a would-be pick wiped out after officials ruled safety Jordan Poyer did not “survive the ground” after undercutting a pass to Hunter Henry.

Rhamondre Stevenson averaged 5.4 yards on 10 carries. Other than that, little went right for the Patriots’ offense.

3. Penalties pile up again
Including those that were declined, the Patriots committed 10 penalties in the loss. They lost a total of 62 yards on those fouls, which included offensive holding calls on Brown, McDermott, left guard Cole Strange and center David Andrews, Jonathan Jones’ defensive holding, two flags on cornerback Jack Jones (defensive holding and defensive pass interference), intentional grounding on Mac Jones and an unintentional delay of game on a punt from deep in Patriots territory.

4. Marcus Jones, three-way player
Jones won the Paul Hornung Award last season as the most versatile player in college football. He primarily was a cornerback and return man at Houston, but he also moonlighted as a wide receiver, catching a total of 15 collegiate passes. Given Bill Belichick’s long-standing love of multipositional players, it seemed like only a matter of time before he’d try the diminutive defensive back out on offense.

Thirteen weeks in, he finally did.

Jones played the first offensive snap of his NFL career Thursday night and made an immediate impact, catching a screen pass out of the slot and taking it 48 yards for a touchdown.

Jones hit 20.88 mph as he outraced Poyer, per NFL Next Gen Stats, the fastest speed any Patriots ball-carrier has reached this season.

It was the second career touchdown for the third-round rookie, who also beat the New York Jets with a game-winning 84-yard touchdown in Week 11. Jones later took a snap at running back, catching a 3-yard pass out of the backfield.

5. Uche keeps rising
One bright spot for the Patriots’ defense: Josh Uche, whose Year 3 breakout is in full effect. The linebacker now has seven sacks over his last five games, including two Thursday night against Allen. The second was a strip-sack that Matthew Judon recovered, giving the Patriots a chance to stage one final ill-fated scoring bid before halftime.

Uche has flashed potential since his rookie training camp, and he’s finally realizing it.

6. Poor clock management
The Patriots squandered a chance to cut into Buffalo’s lead just before halftime.

Taking over at their own 42-yard line after Judon’s fumble recovery, they quickly picked up 14 yards on a Rhamondre Stevenson carry and 9 more on a sideline completion to Jakobi Meyers. They had the ball at the Buffalo 35 with 54 seconds remaining and two timeouts.

The Patriots then called a draw play on second-and-1 and used one of their timeouts after Stevenson was stuffed for no gain. Then, Mac Jones dove forward on a QB sneak to pick up first-down yardage, and they burned their final stoppage rather than hurrying to the line and either running another play or spiking the ball to stop the clock.

The Patriots seemed to be playing for a field-goal try rather than attempting to get the ball into the end zone. If that was their strategy, it backfired. They gained 4 yards on the next three plays, and Nick Folk doinked his 48-yard attempt off the crossbar — the second time in three games that New England’s reliable veteran kicker had missed short on a sub-50-yard field goal.

The Bills took a 17-7 lead into halftime, and the Patriots never got closer than that. 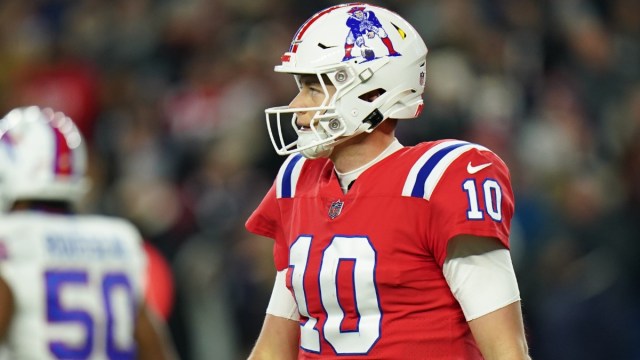 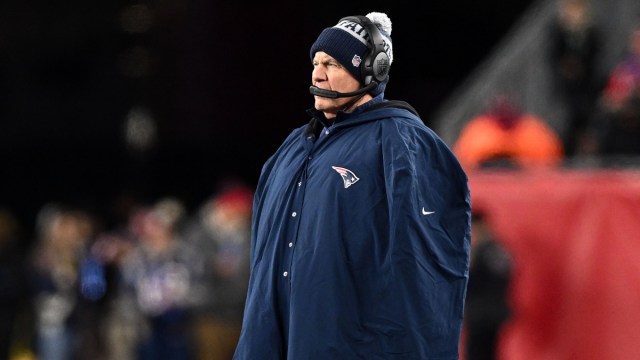