The upset of Week 1 wasn’t the St. Louis Rams beating the Seattle Seahawks, it was our NESN.com experts having stellar performances in weekly picks.

All three NFL pickers not only posted winning records against the spread, but comfortably so. They also killed it for team Tom Brady’s Emails in the Westgate SuperContest, going 4-1 for Team OddsShark in the world’s biggest football handicapping contest.

You know what that means? Exactly — we’re in for a massive fall-to-earth correction this week. Picks time!

Here’s how the standings shape up after Week 1:
Ben Watanabe: 11-4-1. Last season’s cellar-dweller opens strong.
Mike Cole: 10-5-1. The champ is back, coming strong out of the gate.
Ricky Doyle: 9-6-1. The scrappy rookie won more than he lost in his debut.

Now on to this week:

Thursday, Sept. 17
Denver Broncos (1-0) at (-3) Kansas City Chiefs (1-0), 8:25 p.m. ET
Ricky: Chiefs. The Broncos are 11-1 against the spread over the last four seasons in divisional road games. But this is 2015 and Peyton Manning’s arm is a Ramen noodle. I like Denver’s defense, but Kansas City’s D will — to steal a phrase from “Madden 96” — flatten Manning like a pancake.
Mike: Chiefs. Road teams lost three of the first four Thursday night games last season by an average of 31 points. The only home team to lose on Thursday night in that stretch was the Redskins because they’re the Redskins.
Ben: Broncos. With two strong defenses, I give the nod to the team with the quarterback more likely to make plays given limited preparation in the short week. That is all.

Sunday, Sept. 20
(EV) New England Patriots (1-0) at Buffalo Bills (1-0), 1 p.m.
Ricky: Patriots. Ralph Wilson Stadium will be rocking. That’s cool. But let’s stop acting like a loud crowd is insurmountable and Rex Ryan’s machismo is something new. If the Patriots lose, it’ll be because Tyrod Taylor and the Bills’ ground game is capable of giving New England’s run defense fits. Still, I’ll take the greatest quarterback of all time in an early-season pick ’em.
Mike: Patriots. I love the Bills in this game, but I’m a coward, and I just can’t pick against the Patriots in a game where I’m not given points.
Ben: Bills. I was hoping the Bills would get at least a couple of points, but their defense is dominant and their run-favoring offense won’t get away from the rush the way the Steelers did despite gouging New England on the ground in Week 1.

Houston Texans (0-1) at (-3) Carolina Panthers (1-0), 1 p.m.
Ricky: Texans. I’ve made a lot of dumb decisions in my life. Picking the Texans in back-to-back weeks could end up being the dumbest, but I’m going to roll the dice anyway. Something tells me Houston’s defense will step up and Ryan Mallett — assuming Bill O’Brien makes the right call at quarterback — will fare better than Brian Hoyer did last week against the Chiefs, which isn’t really saying much.
Mike: Panthers. There are plenty of folks out there looking forward to this game, people who view this football game as the highlight of their weekend. I feel bad for those people.
Ben: Panthers. We should institute a new rule and get one “pass” every week. Win or lose, I don’t want this crumby game affecting my record, dammit.

(EV) Arizona Cardinals (1-0) at Chicago Bears (0-1), 1 p.m.
Ricky: Cardinals. The Bears are who we thought they were: Not a very good team. As long as the Cardinals contain Matt Forte, they’ll have no problem improving to 2-0, even in enemy territory.
Mike: Cardinals. The only thing the Bears did well last week was run the ball. The Cardinals allowed a league-low 54 yards on the ground in Week 1, and had one of the better run defenses last year.
Ben: Cardinals. This one’s waffled between 1 1/2 points and even, which is immensely generous to the Bears. Home-field advantage at Soldier Field doesn’t exist for them anymore.

San Diego Chargers (1-0) at (-3) Cincinnati Bengals (1-0), 1 p.m.
Ricky: Chargers. Maybe these teams can meet up at halftime and talk about how they’ll probably get throttled come January. Anyway, the Bengals will receive a taste of real competition after dismantling the Raiders in Week 1. Philip Rivers looks like a man on a mission.
Mike: Bengals. If I wasn’t so lazy, I’d look up the Chargers’ record straight-up and against the spread in 1 p.m. ET games. But I’m pretty sure it’s not that good.
Ben: Bengals. Early start for the Chargers, who head east and take on a Cincy team in typical early-season Bengals mode — that is, before their usual late-season collapse.

(EV) Tennessee Titans (1-0) at Cleveland Browns (0-1), 1 p.m.
Ricky: Titans. Mariota Magic will last at least one more week. The Browns are rather accommodating like that.
Mike: Titans. Ever do a Google Images search for “Browns fans?” It’s hilarious and also kind of sad. That’s all I’ve got.
Ben: Titans. Taking the Titans in each of the first two weeks, as I’ve done, usually is a recipe for disaster, but “Recipe for Disaster” also happens to be Johnny Manziel’s middle name.

Detroit Lions (0-1) at (-2.5) Minnesota Vikings (0-1), 1 p.m.
Ricky: Lions. The Vikings aren’t as bad as they looked Monday night against the 49ers. They can’t be. No one can be. But they still looked like crap. And with that in mind, I’m giving them a one-week ban.
Mike: Vikings. How did the Vikings celebrate Adrian Peterson’s return? By only giving him 10 handoffs and getting spanked by the 49ers, of course! I think they’ll rectify things this week against the Lions (who stink).
Ben: Vikings. Here I was about to pick against the Vikings, whom I do not like despite all the nice things people said about them this offseason. Then I remembered Matt Stafford doesn’t win on the road, especially in September. Detroit’s record against the spread in its last seven September road games: 2-5.

Tampa Bay Buccaneers (0-1) at (-11.5) New Orleans Saints (0-1), 1 p.m.
Ricky: Buccaneers. If nothing else, Jameis Winston someday might become the most prolific garbage-time quarterback in NFL history. He should have an opportunity to pad his resume in that area this Sunday. Here’s hoping he comes through. This is just way too many points to pick the ‘Aints.
Mike: Buccaneers. So many points. A couple of late scores means a back-door cover for the Bucs. I hope.
Ben: Saints. Las Vegas is going to play a little game this season called “How Many Points Do We Need To Give The Bucs Before Ben Picks Them?” Answer: All of them, Vegas. All of the points.

Atlanta Falcons (1-0) at (-1) New York Giants (0-1), 1 p.m.
Ricky: Falcons. Two fourth-quarter possessions — one on offense and one on defense — against the Cowboys in Week 1 told me everything I need to know about this year’s Giants. This could turn into a shootout, with the G-Men finding a way to blow it late.
Mike: Giants. Note to Eli Manning: If a teammate has a chance to score this weekend, let him score, you dummy.
Ben: Falcons. Both these teams looked less terrible than expected in their openers, but Eli Manning and Big Blue still seem to be searching for an identity. And New York doesn’t have an offensive weapon on par with Julio Jones.

San Francisco 49ers (1-0) at (-5.5) Pittsburgh Steelers (0-1), 1 p.m.
Ricky: Steelers. Unless the Vikings and Steelers switch places Sunday, the 49ers will be chopped down to size. Hopefully San Francisco enjoyed its season-opening win against Minnesota. It might be the Niners’ last one for a few weeks.
Mike: Steelers. The 49ers come East after a big win to start the season? They’re going to get their doors blown off.
Ben: Steelers. San Francisco hasn’t been all that great against the spread on the road of late, and this is a far worse Niners team than usual. Hopefully the Steelers can get their headsets — and their defense — working at home.

(-3.5) St. Louis Rams (1-0) at Washington Redskins (0-1), 1 p.m.
Ricky: Rams. The Redskins don’t do anything for me. Never have, really. The Rams, meanwhile, are coming in hot after a hard-fought win over the defending NFC champions.
Mike: Rams. The Rams’ defense is legitimate, and the offense will be playing with plenty of confidence after dropping 34 on the Seahawks last week.
Ben: Rams. Look at the Rams, favored in our nation’s capital! Aaron Donald, the 2015 NFL Defensive Player of the Year in waiting, may pressure Kirk Cousins into roughly 48 interceptions in this game, which would be a league record.

(-7) Miami Dolphins (1-0) at Jacksonville Jaguars (0-1), 4:05 p.m.
Ricky: Dolphins. Honestly, give me one good reason to pick the Jaguars. You can’t. Fins roll.
Mike: Dolphins. Last week, I said the Dolphins needed to blow out the Redskins if they wanted to be taken seriously. This week, they need to blow out the Jaguars in order for me to not look like a total moron again.
Ben: Dolphins. I was all ready to pick against the Dolphins this week, who were underwhelming against a mediocre opponent in their opener. Then I saw they had the Jags up next. Oh, well. There’s always next week.

Baltimore Ravens (0-1) at Oakland Raiders (0-1), 4:05 p.m.*
Ricky: Ravens. “The Raiders are moving in the right direction.” — Something I said last week/something I shouldn’t have said last week.
Mike: Ravens. The Ravens bottled up the Broncos on the road last week, and I’ve got just a hunch they’ll do the same against the Raiders this week.
Ben: Ravens. I wish we could just be like Vegas and completely ignore this game exists. In general, Oakland should never be the pick, ever.
*off the board pending injury status of Oakland QB Derek Carr

Dallas Cowboys (1-0) at (-5.5) Philadelphia Eagles (0-1), 4:25 p.m.
Ricky: Cowboys. Tony Romo was awesome against the Giants. He won’t have Dez Bryant this week, but the Eagles will have their secondary, which looked horrendous against the Falcons.
Mike: Eagles. Seeing what Julio Jones did to the Eagles on Monday night makes me think this game would be much different if Bryant wasn’t hurt. He is, though, and the Eagles will figure things out back at home.
Ben: Eagles. Yeah, yeah. The Cowboys won and the Eagles lost, but I feel the second-half Eagles from Monday are a lot closer to the real Eagles than the last-minute Cowboys are to the real Cowboys. That’s my (completely nonsensical) logic.

Seattle Seahawks (0-1) at (-4) Green Bay Packers (1-0), 8:30 p.m.
Ricky: Packers. The Seahawks have won the last three head-to-head matchups. But all of those games were played in Seattle and all came when Pete Carroll looked like less of a stooge. The Seahawks don’t seem like they’re in a great place right now, and Aaron Rodgers simply kills it at home.
Mike: Packers. The Packers’ pass rush terrifies me both as a bettor and a Packers fan, but the Seahawks can’t get out of their own way. Biggest reason for taking the Packers, though? They finally get the Seahawks at Lambeau.
Ben: Packers. That’s a lot of points for Rodgers to be giving up to a traditionally stout Seattle defense, but the Rams revealed some kinks in the Seahawks’ armor on both sides of the ball.

Monday, Sept. 21
New York Jets (1-0) at (-7.5) Indianapolis Colts (0-1), 8:30 p.m.
Ricky: Jets. Not buying what the Colts are selling. They’re all flash and no substance, particularly on the defensive side. Andrew Luck can mask some of Indianapolis’ shortcomings, but only to a point.
Mike: Jets. There’s a good enough chance the Colts roll here, but don’t you get the feeling the Colts are kind of a soft team? If the Jets punch them in the mouth early (pun very much intended), they’ll hang around on the national stage.
Ben: Jets. When the line is more than a touchdown and the Colts’ defense is involved, I’ll feel far more comfortable with the points than with a D that got pushed around by Tyrod Taylor & Co. last week. 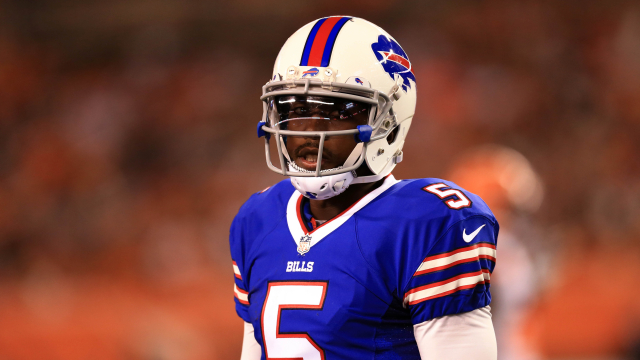 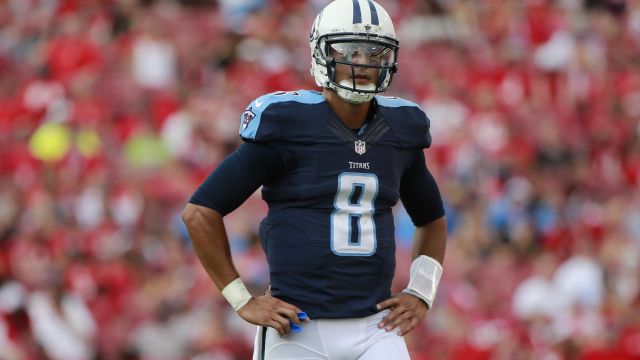 Fantasy Football: Can Marcus Mariota Be Relied On In Week 2? (Podcast)