Team Canada was expected to roll into the semifinals of the 2014 Winter Olympic men’s hockey tournament, especially when Latvia did it the favor of knocking out the tournament’s top defensive team, Switzerland, in the first elimination round.

The Canadians did end up advancing to the semis with a 2-1 win Wednesday (they’ll play the United States on Friday), but a brick wall named Kristers Gudlevskis made them climb a mountain to get there.

Gudlevskis, a fifth-round draft pick of the Lightning in 2013, stopped 55 Canada shots in the contest, allowing the overmatched Latvians to keep the game tied at one goal apiece until deep into the third period. That lofty save total illustrates how much Canada controlled the game — goalie Carey Price was the only Canadian player not to record a shot on goal — but the defending gold medalists simply could not stuff home the equalizer against Gudlevskis and an extremely physical Latvian defensive corps.

Gudlevskis’ blueliners clogged the area throughout the game, and one — quite literally — even gave the netminder a hand in foiling a Grade-A scoring chance.

With 11:33 remaining in the third, Jonathan Toews looked to have put the Canadians ahead by jamming home a rebound off a Drew Doughty slap shot. The puck trickled between the goalie’s leg pads, and as Gudlevskis contorted his body to stop it, Latvian defenseman Kristaps Sotnieks reached his glove down and smothered the puck just as it was about to cross the goal line.

Canada coach Mike Babcock was furious, arguing that Toews should at least be awarded a penalty shot, but the play stood.

Logjams like that in front of the Latvian net were prevalent during the third period, and they seemed to tire out the 21-year-old goaltender. Gudlevskis required medical attention with just over seven minutes to play, and less than 30 seconds later, a Shea Weber one-timer finally beat him for the go-ahead goal.

Latvia made one final rush on Price with an extra attacker on, but to no avail.

The Latvians’ run in Sochi is done, but expect to hear Gudlevskis’ name long before the 2018 games in South Korea. He earned his first NHL call-up just before these Olympics began, and Wednesday served as quite the audition to the one man he needs to impress the most: Lightning — and Team Canada — general manager Steve Yzerman. 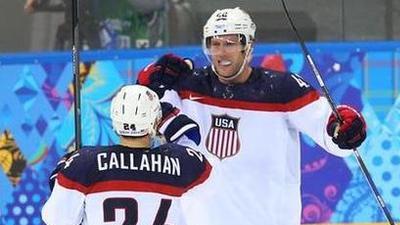