The NBA draft is one day away, and the rumor mill is churning as teams try to move up and down in the first round.

The Boston Celtics apparently are one of those teams. They reportedly offered a package that included guard Marcus Smart, big man Kelly Olynyk and draft picks to the Philadelphia 76ers for Nerlens Noel and the No. 3 pick in this year’s draft, but it was rejected.

How the draft will unfold is anyone’s guess, but here’s our final mock draft before NBA commissioner Adam Silver opens Round 1 on Thursday night.

1) Minnesota Timberwolves: Karl-Anthony Towns, Kentucky (C, 7-0, 250)
Towns is without question the top prospect in this class and a no-brainer pick for Minnesota here. He’s a big, strong, athletic center who can score from mid-range and at the basket, and he also can defend well. He’s the total package and would make a great duo with Andrew Wiggins, a former No. 1 pick and reigning Rookie of the Year.

2) Los Angeles Lakers: D’Angelo Russell, Ohio State (PG/SG, 6-5, 180)
Jahlil Okafor won’t be easy to pass on at No. 2, but the NBA has become a perimeter game, and the large majority of teams have quality point guards. The Lakers are not one of those teams, and Russell is a combo guard who can score and create for teammates with excellent playmaking abilities. He fills a need for L.A. and is one of the four best players in this class.

3) Philadelphia 76ers: Jahlil Okafor, Duke (C, 6-11, 270)
The 76ers already have two talented young centers in Nerlens Noel and oft-injured Joel Embiid, but Philly cannot afford to pass on a prospect of Okafor’s caliber. He’s not a great low-post defender, but he can score with his back to the basket and rebound very well. The 76ers must stockpile assets to accelerate their rebuild, and that means taking the best player available with this pick.

4) New York Knicks: Emmanuel Mudiay, Congo (PG, 6-5, 190)
Mudiay can score with an outside shot and by attacking the rim. He’s also a quality playmaker with great floor vision and good decision-making, which really would help a Knicks team that lacks a star point guard.

5) Orlando Magic: Justise Winslow, Duke (SG/SF, 6-6, 229)
It’s difficult to figure out what the Magic are trying to build. They have a solid collection of talent but no real superstar-caliber players. However, they could use another wing player, and Winslow is the best choice. He’s a smart, athletic player who can score and defend at a high level in multiple positions.

6) Sacramento Kings: Willie Cauley-Stein, Kentucky (C, 7-0, 240)
Trade rumors surrounding center DeMarcus Cousins don’t appear to be going away anytime soon, and his uncertain future with the Kings makes the selection of Cauley-Stein a no-brainer. The Kentucky center runs the floor well with tremendous athleticism, defends at a high level and has an improving offensive game. He doesn’t have a real position yet because he’s big and athletic enough to play all three frontcourt positions, but few players in this class have more all-around talent.

7) Denver Nuggets: Mario Hezonja, Croatia (SG/SF, 6-8, 215)
Hezonja is an excellent scorer and has the athleticism and size to defend talented wing players.

8) Detroit Pistons: Kristaps Porzingis, Latvia (PF, 7-1, 220)
The Pistons need more outside shooting, and Porzingis can provide that skill set, plus good size and athleticism, to the power forward spot.

9) Charlotte Hornets: Stanley Johnson, Arizona (SF, 6-7, 240)
Johnson is an athletic small forward who scores, rebounds and defends the wing very well. He’ll likely be the best player available for the Hornets if they don’t trade this pick.

10) Miami Heat: Devon Booker, Kentucky (SG, 6-6, 205)
Booker is a consistent outside shooter who also can score at the rim with a quick first step on the perimeter. He would provide much-needed bench scoring for the Heat and give head coach Erik Spoelstra a quality backup for superstar two-guard Dwyane Wade, who has battled a lot of injuries in recent seasons.

11) Indiana Pacers: Sam Dekker, Wisconsin (SF, 6-9, 230)
The Pacers struggled to score last season, and Dekker would improve that with a quality outside shot and consistent free-throw shooting.

12) Utah Jazz: Myles Turner, Texas (PF/C, 6-11, 243)
Turner is an NBA-ready big man who can defend power forwards and centers. He also can score with a well-rounded low-post game and consistently rebound and block shots. Turner might not be available at this pick, but if he is on the board, it’s a no-brainer selection for the Jazz.

13) Phoenix Suns: Trey Lyles, Kentucky (PF, 6-10, 250)
The Suns need a big man who can score in the low post and provide solid defense, and Lyles fits the bill. He doesn’t have elite athleticism, but he’s a fundamentally sound player at both ends of the floor.

14) Oklahoma City Thunder: Cameron Payne, Murray State (PG, 6-3, 185)
Russell Westbrook plays a lot of minutes and has battled a few injuries in recent seasons. When he’s been out of the lineup, there is a significant drop-off from the bench in scoring production at point guard. It’s a position where OKC must add more depth, and Payne easily is the best player for that role.

15) Atlanta Hawks (via Brooklyn): Rondae Hollis-Jefferson, Arizona (SF, 6-7, 215)
Atlanta needs more athleticism and defense on the wing. and Hollis-Jefferson can provide those skills and be a factor in transition.

17) Milwaukee Bucks: Frank Kaminsky, Wisconsin (C, 7-0, 240)
Kaminsky fills a need for low-post scoring, strength and depth in the Milwaukee frontcourt. He doesn’t have the potential to be an elite player, but he’s going to play with a ton of effort and do the little things at both ends of the floor.

18) Houston Rockets (via New Orleans): Kelly Oubre, Kansas (SF, 6-7, 200)
Oubre is an athletic wing player who can knock down outside shots and defend quality scorers. He’s also among the more NBA-ready small forwards and could be an important role player for Houston off the bench.

19) Washington Wizards: Justin Anderson, Virginia (SG/SF, 6-6, 225)
Anderson could be drafted higher as a versatile, athletic wing player with good perimeter defense and a much-improved jump shot. He would be a good replacement for Paul Pierce at small forward, though.

20) Toronto Raptors: Montrezl Harrell, Louisville (PF, 6-8, 240)
The Raptors need to get tougher in the paint, and Harrell can provide good size, a strong work ethic and rebounding to Toronto’s frontcourt. He has the potential to be a double-double guy as a starter or off the bench.

21) Dallas Mavericks: Tyus Jones, Duke (PG, 6-1, 190)
The Mavericks need a pass-first point guard who can find scorers on the perimeter and effectively run the pick-and-roll. Jones fits this role and showed tremendous poise and decision-making during Duke’s national championship run.

22) Chicago Bulls: Chris McCullough, Syracuse (PF, 6-10, 220)
Pau Gasol wasn’t the type of addition many thought he would be this past season, and center Joakim Noah took a step back because of injury. The Bulls need to get younger and more athletic in the frontcourt, which makes McCullough a good fit at this spot as a quality rebounder and an improving scorer.

24) Cleveland Cavaliers: Kevon Looney, UCLA (SF/PF, 6-9, 220)
Looney has enough size to give power forwards Kevin Love and Tristan Thompson a breather while also having the athleticism to play small forward when LeBron James is on the bench or the Cavs go with a small lineup. Looney would provide rebounding, good defense and low-post scoring off the bench.

25) Memphis Grizzlies: Olivier Hanlan, Boston College (PG/SG, 6-4, 190)
The Grizzlies ranked 22nd in the regular season and 12th in the playoffs in 3-point shooting percentage, and their inability to consistently knock down outside shots was a huge weakness in Round 2 against the Golden State Warriors. Hanlan can score in a variety of ways, including from beyond the arc.

26) San Antonio Spurs: Jerian Grant, Notre Dame (PG/SG, 6-5, 205)
Point guard Tony Parker hasn’t played in more than 70 games since 2010-11, and shooting guard Manu Ginobili also has dealt with injuries throughout his career. They are 33 and 37 years old, respectively, so it would be smart for San Antonio to draft a potential replacement. Grant is a playmaking combo guard who ranked among the NCAA leaders in assists with 6.7 per game last season while also averaging 16.5 points.

27) Los Angeles Lakers: Christian Wood, UNLV (PF, 6-11, 220)
If the Lakers take a point guard at No. 2, it makes sense to add rebounding, size and athleticism with a power forward like Wood.

29) Brooklyn Nets (via Atlanta): Terry Rozier, Louisville (PG, 6-2, 190)
Rozier might go higher, but he’s an excellent fit for a Nets team that lacks playmaking skill at point guard. He’s the type of pass-first ball handler who finds teammates in the right spots in transition and runs the pick-and-roll very well.

30) Golden State Warriors: Dakari Johnson, Kentucky (C, 7-0, 244)
Drafting a frontcourt player is a smart move for Golden State, given its abundance of quality guards and wing players. Johnson lacks the potential to be a dominant center, but he’d be able to step right in as a rookie and provide rebounding, shot blocking and interior defense off the bench. 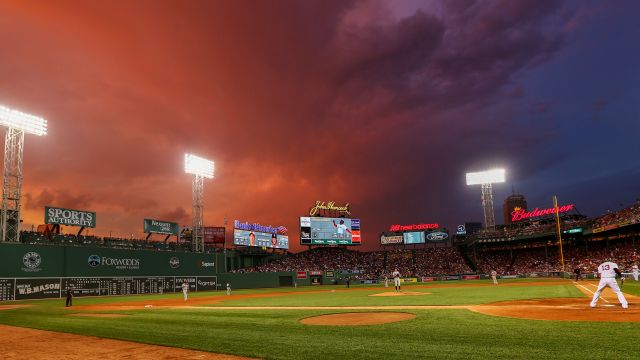 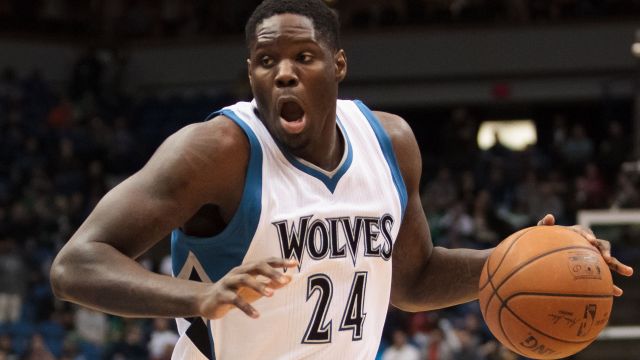