UPDATE (12:50 p.m. ET): It looks like a done deal between the New York Yankees and the Miami Marlins. Pending a physical, here’s how the trade shakes out:

The minor leaguers #Marlins are getting are Jorge Guzman and Jose Devers, who is Rafael Devers' cousin.

I believe if no problems with physical the trade will be Stanton and $30M to #Yankees for Castro and 2 lower-level minor lge pitchers. It will reflect #Yankees giving up lesser prospects but having to assume more of Stanton's pact than even #sfgiants #stlcards were willing.

The Marlins reportedly will pick up $30 million of the $295 million remaining on Stanton’s contract. Here’s why that’s important:

Source: #Yankees to receive $30 million from #Marlins in trade. That is significant, because it counts as offset to luxury-tax obligation. So, it remains possible Yankees can avoid paying luxury tax in 2018. @JonHeyman first to report inclusion of cash. @MLB @MLBNetwork

The Miami Marlins have agreed to trade outfielder Giancarlo Stanton to the Yankees, FanRag Sports’ Jon Heyman reported Saturday morning. There’s still no word on whether Stanton will waive his no-trade clause, though reports earlier this week indicated he would approve a trade to the Bronx.

sources: yankees and marlins have a deal for giancarlo stanton

Source: Giancarlo Stanton trade agreement is in place between #Yankees and #Marlins, but deal is still pending Stanton?s consent and Yankees approval of physical. @MLBNetwork @MLB

I reported #Yankees are sending at least Castro to #Marlins among veterans and prospects, but not their top ones

Although nothing’s been made official, Sherman’s report seems to indicate the Yankees aren’t parting with top prospects Gleyber Torres and Chance Adams, nor rising star Clint Frazier. Instead, second baseman Starlin Castro appears to be the biggest piece moving to Miami.

It’s no guarantee that Stanton will OK a deal to New York, however. The San Francisco Giants and St. Louis Cardinals both had deals in place for him this week, but the 28-year-old ultimately vetoed trades to those clubs. Furthermore, the it’s widely believed that the Los Angeles Dodgers are the No.1 team on his priority list.

In Stanton, the Yankees would be getting one of the game’s best hitters, and adding him to a lineup that already features sluggers Aaron Judge and Gary Sanchez. Last season, Stanton hit .281 with a whopping 59 home runs and 132 RBIs — numbers which earned him the National League Most Valuable Player award.

For perspective on how powerful the Yankees’ lineup would be with Stanton, consider this: Last season, Stanton, Sanchez and Judge combined to hit 144 home runs. That’s more than the San Francisco Giants hit as a team (128) and just 24 less than the rival Boston Red Sox (168).

Stanton still has 10 years and $295 million remaining on his contract, though he can opt out after the 2020 season. It’s currently unclear as to how much of that money New York is taking on in the deal. 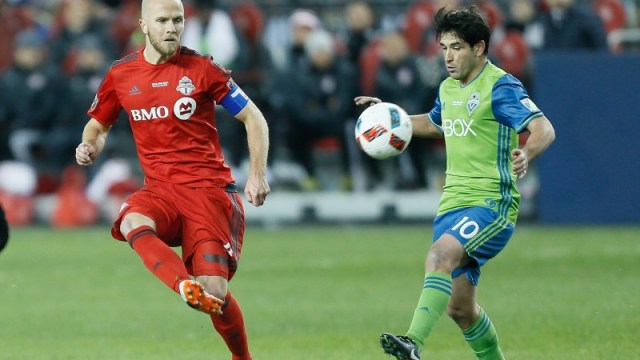