It took nearly 15 years, but Alex Rodriguez finally has put on a Boston Red Sox uniform.

Rodriguez, as you might recall, almost was traded to the Red Sox in 2003 in a deal that was vetoed by the Major League Baseball Players’ Association. And, well, you know what happened next: The Yankees traded for Rodriguez, choked against the Red Sox in 2004 and were passengers to the bizarre, drama-filled back-half of Rodriguez’s storied career.

That brings us to Friday night.

Rodriguez made a bet with Red Sox legend David Ortiz that the Yankees would beat Boston in the American League Division Series. The terms were simple: If the Red Sox won, Rodriguez would wear a Boston uniform while Ortiz showered him in champagne, with the reverse being true if New York prevailed.

The Red Sox, of course, beat the Yankees in four games, which led to this surreal moment Friday night during FOX Sports’ MLB postseason coverage:

The moment has FINALLY come!

Thanks to the @RedSox knocking out the Yankees, here is @davidortiz dumping champagne on @AROD (Who is wearing a Boston uniform!) pic.twitter.com/2YFXXuuMti

“Weird” really is the only word that describes seeing Rodriguez in a Red Sox uniform. We thought it would be a nothing moment, but it really was tough to digest. 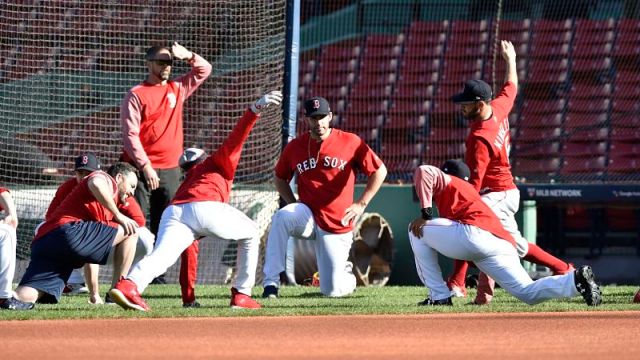 Red Sox Vs. Astros: Boston Reveals ALCS Roster Ahead Of Game 1 Vs. Houston