There came a point — several, actually — during the Red Sox’s 2018 World Series run where even the biggest skeptics probably started to believe in Boston.

Not only did the Red Sox keep winning games at an impressive clip on the heels of a 108-win regular season. Their journey also featured a bunch of iconic moments tailor-made for a championship DVD.

The Red Sox defeated the New York Yankees in the American League Division Series and the Houston Astros in the AL Championships Series en route to the World Series, where they took down the Los Angeles Dodgers in five games. Boston went 11-3 overall in the postseason and never faced elimination.

But don’t let the dominance fool you. It was a highly entertaining few weeks in Boston, as the Red Sox dazzled with clutch home runs, sensational defensive plays and everything in between. So let’s revisit the 18 best moments — for 2018, get it? — of the Red Sox’s amazing road to glory, listed chronologically.

1. J.D. Martinez hits three-run homer in first playoff at-bat with Red Sox.
Martinez wasted no time delivering for Boston on the big stage. His three-run homer off J.A. Happ in the first inning of Game 1 of the ALDS against the Yankees lifted the Red Sox to a 5-4 win.

2. Brock Holt hits for first cycle in MLB postseason history.
The Red Sox stomped the Yankees 16-1 in Game 3 of the ALDS to take a 2-1 series lead. Holt led the offensive fireworks by producing a single, a double, a triple and a home run, marking the first cycle in MLB playoff history.

3. Eduardo Nunez’s quick play/Steve Pearce’s awesome stretch clinch ALDS.
The Yankees didn’t go quietly in Game 4 of the ALDS. The Red Sox led 4-1 with Craig Kimbrel on the mound in the ninth inning, but the Yankees stormed back thanks to a very shaky outing by Boston’s closer. The door finally slammed shut on New York’s chances of a comeback when Gleyber Torres hit a dribbler to third base that Nunez quickly fielded and fired to first base for the series-clinching out.

4. Jackie Bradley Jr.?s go-ahead, three-run double rattles around wall in ALCS Game 2.
The Red Sox trailed 4-2 in the third inning of Game 2 against the Astros at Fenway Park (after dropping Game 1) when Bradley swung momentum in Boston’s favor with a go-ahead, three-run double. The Red Sox caught a break, too, as the ball pulled a pretty neat trick along the left field wall, ensuring the bases would clear as Bradley coasted into second.

5. Jackie Bradley Jr. slugs grand slam in ALCS Game 3.
Bradley was an unlikely hero in Game 2. He took things to another level in Game 3 by launching a grand slam in the eighth inning. The blast lifted Boston to victory and a 2-1 series lead.

6. Fan interference call takes away Jose Altuve’s home run in ALCS Game 4.
The Red Sox jumped ahead 2-0 in the first inning of Game 4. The Astros nearly answered in the bottom of the frame when Altuve hit what appeared to be a home run. But umpire Joe West determined that a fan interfered with Mookie Betts as the Red Sox right fielder tried to make a leaping catch, resulting in a long out that changed the complexion of the game.

7. Jackie Bradley Jr. rips go-ahead, two-run homer in ALCS Game 4.
The Red Sox were trailing 5-4 in the sixth inning when Bradley strengthened his ALCS MVP case with another clutch hit. More tense moments would follow in the later innings, but Bradley’s go-ahead home run set the stage for Boston’s 8-6 victory.

8. Mookie Betts cuts down Tony Kemp with strong throw in ALCS Game 4.
The Astros trailed 8-5 when Kemp led off the eighth inning with a line drive into right field. The speedster tried to stretch the hit into a double, but Betts had other ideas, firing an absolute missile to second base to nab Kemp for the first out of the inning. The play wasn’t just impressive, either. It also was crucial, as the Astros threatened in the eighth inning despite Kemp getting gunned down.

9. Andrew Benintendi?s diving catch ends ALCS Game 4.
One of the biggest defensive plays you’ll ever see. The Astros had the bases loaded with two outs in the ninth inning when Alex Bregman hit a sinking line drive to left field. Benintendi sprawled out to make an excellent, game-ending catch. The Astros would have at least tied the game had the ball dropped.

10. Rafael Devers smacks three-run homer in ALCS Game 5.
Martinez started the scoring in Game 5 with a solo home run in the third inning, but Devers gave the Red Sox some much-needed insurance with a three-run homer into the Crawford Boxes in left field.

12. David Price earns first playoff win as a starter in ALCS Game 5.
In 11 previous postseason starts, Price owned an 0-9 record and a 6.16 ERA. He officially got the monkey off his back against the Astros in Game 5, tossing six shutout innings while pitching in place of Chris Sale (illness) as the Red Sox punched their ticket to the World Series with a 4-1 win.

13. Eduardo Nunez rips three-run homer in World Series Game 1.
Red Sox manager Alex Cora told Nunez to stay ready. Nunez did. And it worked out well for the Red Sox, as the hustling infielder pinch-hit for Rafael Devers in the seventh inning of Game 1 and hooked a three-run homer over the Green Monster to extend Boston’s lead.

15. Nathan Eovaldi gives epic effort in World Series Game 3.
The Red Sox lost only one game in the World Series. It happened in heartbreaking fashion, as Max Muncy ended Game 3 — the longest game in MLB postseason history (18 innings; 7 hours, 20 minutes) — with an opposite-field, walk-off home run. But the effort of Red Sox hurler Nathan Eovaldi still was the stuff of legends. Eovaldi, who was scheduled to start Game 4 the following day, was thrust into action in Game 3 with the score tied 1-1 in the 12th inning. He wound up tossing 97 pitches over six innings despite making the second of back-to-back appearances just two days prior.

Mitch Moreland cut the Dodgers’ lead to 4-3 in the seventh inning with a three-run, pinch-hit homer.

Steve Pearce then hit a game-tying home run in the eighth inning, setting the stage for a five-run ninth inning that included a go-ahead RBI single by Rafael Devers and a three-run double by Pearce.

The rally came after Sale pumped up his teammates with a speech in the dugout, much like David Ortiz did in Game 4 of the 2013 World Series.

18. Chris Sale strikes out Manny Machado for final out of World Series Game 5.
What a fitting way to finish the job. Boston’s best pitcher pitched the ninth inning and struck out Manny Machado — a noted Red Sox rival — for the season’s final out. 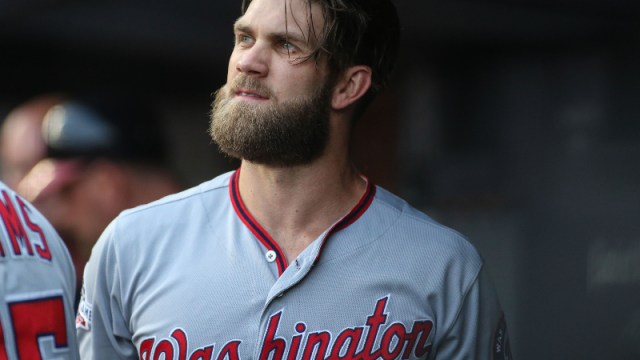 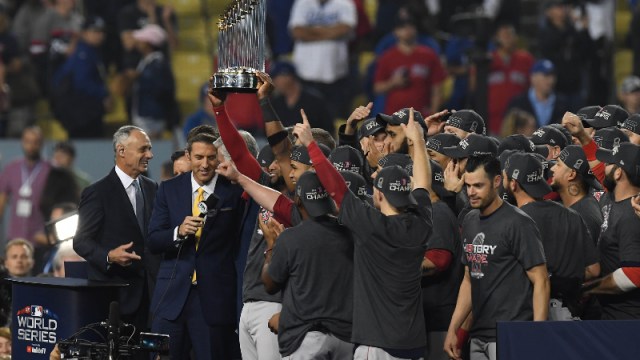