Tom Brady Calls Out Haters After Proving Them Wrong In Yet Another Playoff Win - NESN.com Skip to content

FOXBORO, Mass. — As he left the field following the New England Patriots’ demolition of the Los Angeles Chargers in the divisional round, a triumphant Tom Brady delivered a strong message to those who have doubted him and his team this season.

“It’ll be a good game. They’re a good team. I know everyone thinks we suck and can?t win any games, so we?ll see.?

The Patriots, who faced a barrage of criticism after each of their two regular-season losing streaks, certainly did not suck against the Chargers, whom they dismantled 41-28 at Gillette Stadium in a game that was far more lopsided than the final score indicated.

Brady didn’t, either, completing 34 of 44 passes for 343 yards and one touchdown with no interceptions. His 77.3 completion percentage tied for his best mark of the season, and his yardage total ranked second behind the 358-yard effort he had in Miami in Week 14.

The 41-year-old QB did not expand on his pointed comments during his postgame news conference — “I just like winning,” he said — but his teammates were happy to do so for him.

“Tom said it, so I can comment on it — yeah, everybody does think we suck, everybody thinks we don’t have enough,” wide receiver Phillip Dorsett said, via ESPN.com. “But the only thing that matters is what we think in this room and we believe. When you have a whole group of guys that believes, it can be a special thing. So we have to keep playing, keep going hard.”

“We?ve been hearing things like that forever now for a few years,” added tight end Rob Gronkowski, who’s faced plenty of questions himself after an underwhelming statistical season. “So we just laugh at it, whatever they say, and we just keep moving forward.”

Safety and longtime co-captain Devin McCourty also is well aware of the negativity.

“We see it,” McCourty said. “We see our quarterback?s too old, we?re not good enough on defense, the skill players aren?t good. We see it, but it doesn?t affect how we prepare. We love practicing and we love playing with each other, preparing. We?re going to take advantage of that and come out ready to go no matter what.”

“It?s fine, people can count us out,” wide receiver Chris Hogan added. “The guys in this locker room, we believe in each other, we believe in ourselves and our abilities.”

Even Patriots running back Jeremy Hill, who’s been on injured reserve since tearing his ACL in Week 1, chimed in, mocking the idea popularized by the nonsense-spewing talking heads on “First Take” and sports radio that Brady had reached a “cliff” in his 19th NFL season.

The Patriots are headed to their eighth consecutive AFC title game, where they’ll get to play the rare role of underdogs. Kansas City opened as three-point home favorites, making this the first postseason game New England has not been favored in since the 2013 AFC Championship Game in Denver. 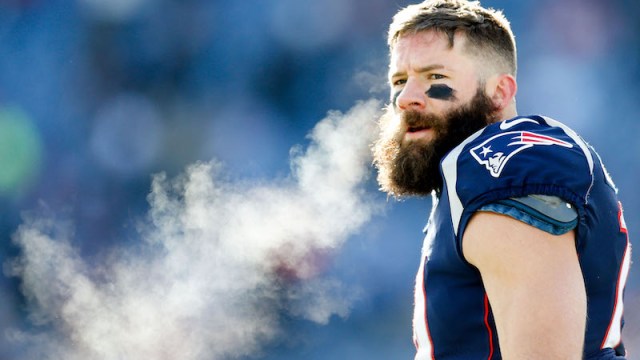