Final, Patriots 16-10: Despite one of their ugliest offensive performances in recent memory, the New England Patriots escaped New Era Field with a victory Sunday afternoon, defeating the Buffalo Bills 16-10 in a battle of AFC East unbeaten.

New England?s defense won the day, holding the Bills to a touchdown and a field goal and forcing three turnovers — interceptions by J.C. Jackson (two), Devin McCourty (one) and Jamie Collins (one). Jackson also blocked a punt that special teamer Matthew Slater returned for what proved to be the deciding score.

Buffalo was forced to finish the game with backup quarterback Matt Barkley at the helm after a Jonathan Jones hit knocked Josh Allen out of the game early in the fourth quarter. Allen threw three interceptions, and Barkley threw one to Collins that iced the game for the Patriots.

The Patriots, who improved to 4-0 with the win, will visit the Washington Redskins next Sunday.

Fourth quarter, 3:09, Patriots 16-10: Sony Michel finally found some momentum on New England’s latest drive, notching runs of 8 and 9 yards before the Patriots were forced the punt.

The Bills can win with a touchdown and an extra point, but they have 86 yards to travel, no timeouts remaining and backup quarterback Matt Barkley in the game. Buckle up.

Fourth quarter, 10:43, Patriots 16-10: The Bills could be without their starting quarterback for the rest of this game.

Josh Allen received medical attention on the field and later exited toward the locker room after being leveled by Patriots cornerback Jonathan Jones, who was flagged for unsportsmanlike conduct on the play.

One play later, backup Matt Barkley delivered a textbook deep ball to John Brown, who fought through pass interference from Stephon Gilmore to pick up 28 yards. A trick-play pass from Brown to T.J. Yeldon fell incomplete, but Kyle Van Noy was flagged for unnecessary roughness on the play, moving the ball to New England’s 8-yard line.

After a Buffalo delay of game call, Gilmore made a touchdown-saving tackle on Brown at the 2-yard line, and Adam Butler busted into the backfield to drop Frank Gore for a 1-yard loss. Barkley’s pass into the end zone on fourth-and-goal fell incomplete, turning the ball over to the Patriots.

The Patriots promptly went three-and-out for the sixth time today. It’ll be Bills ball at the Patriots’ 47.

Allen is being evaluated for a head injury, so Barkley stays in.

Third quarter, 0:58, Patriots 16-10: The good news for the Patriots: Their offense finally generated a big play, with Josh Gordon picking up 31 yards on a rub route (that was challenged for offensive pass interference but upheld).

The not-so-good news: New England had to settle for a field goal after failing to score on three plays from inside Buffalo’s 10.

The Bills can take the lead with a touchdown and an extra point.

The Patriots cornerback just hauled in his second interception of the game, leaping to pick off another ill-advised Josh Allen heave to Zay Jones. Jackson’s blocked punt earlier also resulted in what currently stands as the deciding touchdown.

It’s now New England at the Bills’ 43. Let’s see if they put anything together offensively.

Third quarter, 5:27, Patriots 13-10: The Patriots couldn’t capitalize on Corey Bojorquez’s shank. They gained just 6 yards and were forced to punt for the sixth time today.

This has been an uncharacteristically ineffective performance from Tom Brady. He’s completed just 11 of 26 passes for an even 100 yards, with 46 of those yards coming in the first quarter.

Brady is 1-for-4 when targeting Josh Gordon and 1-for-7 when throwing to Phillip Dorsett.

Third quarter, 9:37, Patriots 13-10: The Patriots have gone three-and-out on four of their last five possessions. The Bills’ highly touted defense has come as advertised thus far.

Tom Brady is 10-for-24 for 90 yards and an interception — heavy pressure and blanket coverage forced him into a throwaway on third down — and Sony Michel has just 28 yards on 11 carries since his 15-yard rush that opened the game.

Third quarter, 10:37, Patriots 13-10: The Bills’ offense is awake, and the Patriots’ touchdown streak is over.

After looking lost in the first half, Josh Allen quickly drove the Bills down the field on the opening drive of the third quarter, completing each of his first six passes. The second-year QB capped the drive by reaching the ball over the goal line on fourth-and-goal from the 1 — the first touchdown the Patriots’ defense has allowed since the AFC Championship Game — and the ensuing extra point cut New England’s lead to three points.

Halftime, Patriots 13-3: The Patriots went three-and-out on their final drive of the first half. The Bills drove into field-goal range thanks to an excellent catch by tight end Dawson Knox, but Stephen Hauschka missed from 49 yards out after Josh Allen took a sack on third down.

Jamie Collins, who had a third-down sack earlier in the half, brought heavy pressure on the field-goal try and might have helped force Stephen Hauschka’s misfire.

Overall, this hasn’t been a particularly strong game for either offense. The Patriots’ defense remains dominant, though. They still have yet to allow a touchdown since the AFC Championship.

Second quarter, 1:55, Patriots 13-3: A 41-yard rumble by Frank Gore — which pushed the ageless back to the 15,000-yard plateau for his career — brought the Bills deep into Patriots territory, but they had to settle for a Stephen Hauschka field goal after Kyle Van Noy sacked Josh Allen on third down.

The Patriots’ struggling offense now will look to add to its modest lead before halftime.

Brady appeared to be targeting Julian Edelman on third-and-goal from the 2 after Sony Michel failed to cross the goal line on consecutive carries.

We’ll be monitoring the status of wideout Phillip Dorsett moving forward. Dorsett was slow to get up after an incompletion near the goal line on fourth-and-8 that drew a defensive pass interference penalty, and he wasn’t on the field for Brady’s interception.

The Patriots passed up what would have been a 53-yard field-goal attempt to try for a first down after Brady was whistled for intentional grounding two plays earlier.

Second quarter, 12:27, Patriots 13-0: Both teams are struggling to throw the football successfully in this game.

Julian Edelman and Rex Burkhead both have not been targeted.

Second quarter, 14:37, Patriots 13-0: Josh Allen has thrown more passes to Patriots defensive backs (two) than to his own receivers (one).

J.C. Jackson did the honors on the Patriots’ second interception, easily hauling in an Allen floater that looked more like a punt than a pass.

The Patriots couldn’t capitalize on this latest miscue, with Tom Brady throwing incomplete to Josh Gordon and Phillip Dorsett before Jake Bailey punted the ball back to Buffalo.

First quarter, 1:32, Patriots 13-0: First three-and-out of the afternoon for the Patriots. Bills take over at their own 41.

First quarter, 2:55, Patriots 13-0: Frank Gore provided Buffalo’s first positive play with a 28-yard dash up the middle, but the drive stalled outside field-goal range after Josh Allen failed to connect with John Brown on a deep ball and then was sacked by Jamie Collins on third down.

A very good punt by Corey Bojorquez pinned the Patriots at their own 6-yard line.

After the Patriots’ defense forced a Bills three-and-out, cornerback J.C. Jackson shot in to block Corey Bojorquez’s punt. Slater scooped up the bouncing ball and ran it back for the first score of his illustrious Patriots career.

Bills quarterback Josh Allen has yet to complete a pass in this game. He fumbled earlier in this latest drive, but Buffalo recovered.

Tom Brady connected with running back James White twice on third down — including a textbook wheel route down the right sideline that picked up 26 yards — and Brandon Bolden finished the job with a 4-yard jet-sweep touchdown.

Stephen Gostkowski’s kicking woes continued, however, as he pushed his point-after attempt wide right. Gostkowski now just 10-for-14 on extra points this season and has missed at least one in each of the last three games.

The Patriots initially appeared to force a Buffalo three-and-out, but a defensive holding call on Stephon Gilmore on third down extended the drive. Patrick Chung was called for defensive pass interference a few plays later, though his foul offset with one on the Bills for an illegal man downfield.

First quarter, 13:17, 0-0: The Patriots’ first drive opened with a season-long 15-yard carry by Sony Michel but stalled shortly thereafter. After Michel was stopped for no gain, Tom Brady fired back-to-back incompletions to Phillip Dorsett, who’d caught 13 of his 14 targets this season entering today.

Fullback Jakob Johnson played his first real NFL offensive snap on Michel’s big gain. It’ll be interesting to see how the Patriots use the German rookie, who was promoted from the practice squad last week after James Develin went down with a neck injury.

First quarter, 15:00, 0-0: The Bills won the coin toss and chose to defer. Brandon Bolden is back deep to receive the opening kickoff for New England.

11:45 a.m.: Bills coach Sean McDermott wasn’t pleased with two Patriots staffers — one of them coaching assistant Brian Belichick — lingering on the field near the end of Buffalo’s warmups.

Thad Brown of WROC-TV captured a video of McDermott animatedly telling these staffers to leave the area, which led to some pushback from the younger Belichick.

It’ll be interesting to hear what McDermott has to say about this exchange after the game.

Here are the Bills’ inactives:

11:06 a.m.: It appears the Patriots will be without starting linebacker Dont’a Hightower today.

Losing Hightower is a significant blow to New England’s defense. He’s been on the field for 65.9 percent of the Patriots’ defensive snaps this season, second-most among front-seven defenders behind linebacker Jamie Collins. Ja’Whaun Bentley, John Simon and Elandon Roberts all could see their roles increase in his absence.

Each team must designate seven inactives each week, so one additional Patriots player also will be held out.

11:02 a.m.: Rex Burkhead, Matt LaCosse and Gunner Olszewski currently are warming up with the active players. It appears all three will be good to go for today.

10:50 a.m.: Some observations from pregame warmups:

Nate Ebner (groin) and Gunner Olszewski (hamstring) are working out pregame for Moses Cabrera. Looks like they?ll be game-time decisions.

James Develin is on IR, but he made the trip to Buffalo. pic.twitter.com/wHsUuGjGj3

Now Dont?a Hightower is testing his injured shoulder for Moses Cabrera and team trainers. Appears he?ll be a game-time decision, as well.

8:15 a.m.: Running back Rex Burkhead reportedly will be a game-time decision for New England.

#Patriots WR Julian Edelman (chest) will play vs. the #Bills, source said, but his snaps will hinge on how he feels. He may take less than his full allotment. Meanwhile, RB Rex Burkhead (foot) is a game-time decision.

8 a.m. ET: Good morning from Orchard Park, N.Y., where the New England Patriots are preparing to take on the Buffalo Bills in a highly anticipated AFC East clash.

Highly anticipated in Buffalo, at least. Bills Mafia hasn?t been this fired up for a regular-season game in years, and for good reason.

The Patriots and Bills enter this game with identical 3-0 records, with the winner taking over the top spot in the divisional standings.

Can New England, which dominated the Pittsburgh Steelers, Miami Dolphins and New York Jets by a combined score of 106-17, continue that dominance against a more formidable foe? Is Buffalo, which boasts a dismal 3-30 all-time record against Tom Brady, a legit playoff contender? We’ll find out this afternoon.

First, we’ll find out who will be playing in this game for the Patriots. Eight players are listed as questionable for New England, and while all eight reportedly made the trip, it remains to be seen which one will be active.

Edelman, who left last week’s game late in the first half, is expected to play, according to multiple reports.

Kickoff is set for 1 p.m. ET. Be sure to check back throughout the morning for full pregame coverage. 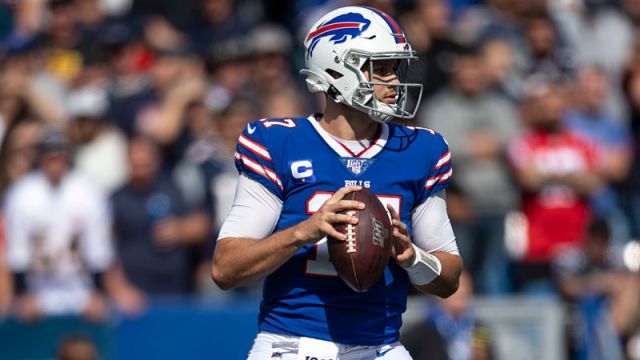 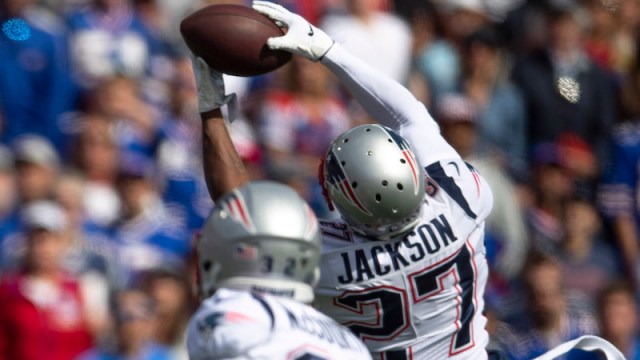 Who Helped Patriots Most In 16-10 Week 4 Nail-Biter Win Over Bills?