A 5-yard touchdown pass from Miami Dolphins quarterback Ryan Fitzpatrick to Mike Gesicki with 24 seconds remaining handed the Patriots the unlikeliest of losses in Sunday’s regular-season finale, 27-24 at Gillette Stadium.

The loss coupled with the Kansas City Chiefs’ win over the Los Angeles Chargers prevented New England from earning a first-round bye in the AFC playoffs. The Patriots now enter the postseason as the No. 3 seed and will play on wild-card weekend for the first time since 2009. They’ll host the Tennessee Titans, Pittsburgh Steelers or Oakland Raiders next Saturday or Sunday.

Fourth quarter, 3:53, Patriots 24-20: Shaq Mason might have just won this game for the Patriots.

The right guard laid a phenomenal open-field block on safety Walt Aikens to spring James White for a 13-yard go-ahead touchdown on third-and-goal.

Mohamed Sanu set up the score with his biggest catch as a Patriot: a 22-yarder off a scramble drill that moved the chains on third-and-4.

If the Patriots’ defense can hold this lead, New England will lock down a first-round playoff bye.

Fourth quarter, 8:49, Dolphins 20-17: DeVante Parker is giving Stephon Gilmore more trouble than any receiver has this season. He’s now up to five catches for 100 yards after beating Gilmore on a slant with no deep safety for 23 yards.

A defensive pass interference penalty on J.C. Jackson moved Miami deeper into New England territory, and though a Duron Harmon pass breakup against Parker on third down prevented a potential touchdown, the Dolphins still added a field goal to take a three-point lead.

Fourth quarter, 12:04, 17-17: An illegal shift wiped away a third-down conversion by James White. The Patriots will punt.

Third quarter, 0:04, 17-17: A sack by Jamie Collins — his first since Week 8 — on third down pushed the Dolphins out of field-goal range. The Patriots will take over on their own 10 after a Miami punt.

Third quarter, 4:26, 17-17: Ever since Elandon Roberts began setting consistent playing time on offense, you just knew Josh McDaniels was going to put the ball in the linebacker’s hands at some point.

He just did. The result: a 38-yard touchdown that tied this game at 17 apiece.

Roberts ran a wheel route out of the backfield, spun to catch a high pass from Tom Brady, broke one tackle and took off down the sideline, outrunning the safety to the goal line.

As he ran back toward the sideline, Roberts broke into the “Boogeyman” celebration popularized by the rest of the Patriots’ linebacking corps.

Third quarter, 7:42, Dolphins 17-10: The Dolphins are back in the lead thanks to a 24-yard completion to Albert Wilson, a 20-yard double pass from Wilson to Patrick Laird, a 14-yard completion to Mike Gesicki and a 2-yard scramble into the end zone by Ryan Fitzpatrick.

Halftime, 10-10: After forcing a three-and-out, the Patriots could have gotten the ball back with about 1:45 on the clock and two timeouts with a chance to take the lead before halftime. Instead, Bill Belichick made the questionable decision to run out the clock and head into the locker room.

That certainly was not an ideal first half for New England, which will receive the second-half kickoff. Tom Brady has completed just 5 of 12 passes for 92 yards with an interception and currently boasts a lower passer rating (34.0) than Miami’s punter (39.6).

After N’Keal Harry picked up a first down on an end-around — and had an extra 15 yards tacked on for a late hit — Tom Brady hit Phillip Dorsett for a 50-yard bomb down the left sideline. It was Dorsett’s first catch since Week 13.

Two plays later, Sony Michel followed a powerful Elandon Roberts block into the end zone for his seventh touchdown of the season.

The @Patriots tie it up on Sony Michel's TD! #GoPats

Second quarter, 5:51, Dolphins 10-3: The Patriots’ passing game is sputtering here in this first half, but some big gains on the group helped them get on the scoreboard.

After a defensive pass interference call against Phillip Dorsett moved the chains on third down, the Patriots ripped off runs of 8, 9, 9 and 14 yards on consecutive plays to move into Dolphins territory. N’Keal Harry then beat former Pats practice squad cornerback Nate Brooks — who’s talking a whole lot of trash out there — for 18 yards on a back-shoulder ball, but New England stalled in the red zone.

Tom Brady sailed passes over Harry’s and Mohamed Sanu’s heads in the end zone, and the Patriots settled for a Nick Folk field goal. Harry was shaken up on his incompletion, so we’ll be closely monitoring his status.

Mohamed Sanu dropped a pass on a crossing route one play earlier. The crispness we saw from this Patriots offense last week against Buffalo has been noticeably absent so far today.

The penalty — which was assessed after a successful Brian Flores challenge — was the fourth OPI flag against New England in the last three games.

Rex Burkhead ripped off runs of 6 and 14 yards to open the drive but also was called for holding, canceling out a defensive pass interference flag against the Dolphins.

Julian Edelman’s workload has returned to its usual level after he was used sparingly during New England’s first possession.

The Dolphins will take over on their own 4-yard line thanks to some excellent punt coverage by Matthew Slater.

First quarter, 1:38, Dolphins 3-0: As any long-eliminated team should in Week 17, the Dolphins are emptying their playbook in this first quarter.

After running a failed fake punt on their first possession, they picked up a first down with a Wildcat reverse. The play was drawn up as a reverse pass, but Isaiah Ford tucked the ball and ran after evading a Deatrich Wise tackle attempt.

The @MiamiDolphins pick up the first down on the reverse! #FinsUp

The Dolphins also moved the ball by conventional means, with DeVante Parker beating Stephon Gilmore for receptions of 28 and 21 yards. Parker had zero catches on seven targets against Gilmore in Week 2.

Miami drove inside New England’s 10-yard line, but Ryan Fitzpatrick couldn’t hit Ford on third-and-8 from the 9, forcing the Dolphins to settle for a Jason Sanders field goal.

First quarter, 8:35, 0-0: Dolphins punter Matt Haack threw a touchdown pass a few weeks ago. He failed to recapture that magic on his latest attempt.

Miami finished off its opening drive with a fake punt, and Haack’s heave to Deon Lacey sailed well out of bounds. Matthew Slater provided coverage on the play.

Joejuan Williams tackled wideout Isaiah Ford short of the first-down marker on third-and-12 to bring the punting team out. Williams evidently is serving as New England’s third cornerback today over Jonathan Jones, who is active but banged up.

The Patriots’ offense went three-and-out on the ensuing possession. New England appears to be taking it easy with Julian Edelman, keeping him off the field until third down.

First quarter, 15:00, 0-0: The Patriots won the toss and deferred. Jake Bailey will kick-off to get things started on a gorgeous Sunday in Foxboro.

— Sony Michel and Jonathan Jones officially are active. Jones returns to the lineup after missing last week with a groin injury.

— Julian Edelman (knee/shoulder), Jamie Collins (shoulder), Ja’Whaun Bentley (knee), Marcus Cannon (ankle) and Shilique Calhoun (illness) all are active after being listed as questionable. It’ll be interesting to see whether the Patriots opt to dial back banged-up players’ workloads if they open up a comfortable lead.

10:30 a.m. ET: Greetings from Gillette Stadium, where the New England Patriots are preparing to take on the Miami Dolphins in the regular-season finale for both teams.

The 12-3 Patriots, who secured a playoff berth last week, can clinch the AFC’s No. 2 seed and a first-round bye with either a win today or a Kansas City Chiefs loss to the Los Angeles Chargers (or a tie by either team).

The 4-11 Dolphins are playing for pride as they close out Brian Flores’ first season as head coach.

Nine Patriots players are listed as questionable for this game:

Michel is expected to play, according to a report from ESPN’s Adam Schefter. He and Jones, who did not play last week against the Buffalo Bills, currently are going through an on-field workout with strength and conditioning coach Moses Cabrera, which typically indicates a player is a game-time decision.

Inactives will be announced at 11:30 a.m. Kickoff is set for 1 p.m. Follow along for live updates. 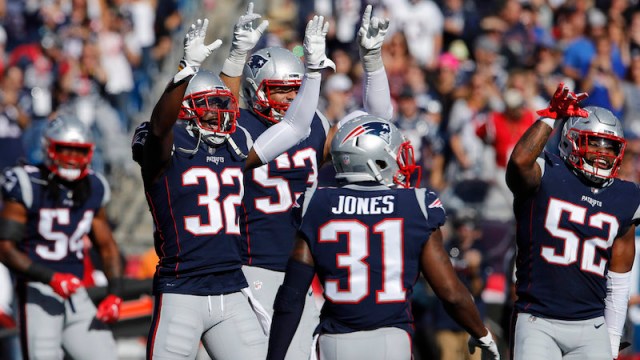 Patriots’ Elandon Roberts Returns To His Roots With Touchdown Celebration 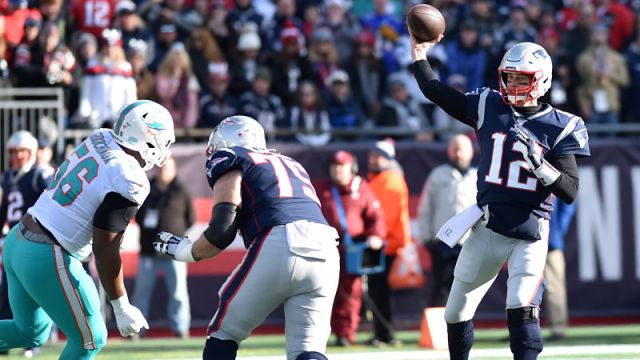 Patriots Suffer Brutal Loss To Dolphins, Will Play In Wild Card Round