The New England Patriots had unprecedented stability at quarterback for 19 years, and now they’re on the hunt for a signal-caller for the second straight offseason.

While it’s still possible that Cam Newton could return to the Patriots, it’s also not likely, if we’re being completely realistic.

A number of veteran signal callers are either set to hit free agency this offseason or could be traded.

Here are the potential fits for the Patriots:

This one is probably the most unlikely to come to fruition. Dallas keeps jerking Prescott around, but chances are the Cowboys will franchise or re-sign Prescott before the 2021 season.

But what if they don’t? Or what if the Cowboys franchise Prescott and then are looking to turn around and trade him?

Prescott is the only true potential franchise quarterback on this list, and the Patriots have plenty of money to pay him if he comes available.

We’re actually not quite sure why the Detroit Lions would trade Stafford, but the possibility is raised frequently enough that the veteran QB is worth discussing.

Stafford didn’t seem to jell well with former Lions, and Patriots defensive coordinator, Matt Patricia, but he’d provide a steady and consistent presence under center for the Patriots.

Wentz will likely be the most divisive player on this list. He was the second overall pick five years ago, is injury prone and coming off of a horrendous season that saw him benched for Jalen Hurts, but he also led the NFL in QBR just four years ago and was at least an average-to-above average quarterback before the 2020 season, when he was throwing to the likes of Philadelphia Eagles wide receivers Travis Fulgham, Greg Ward, Jalen Reagor and John Hightower.

The Patriots would have to decide if Wentz is worth around $25 million per season, but he’s certainly a buy-low candidate.

This one probably makes the most sense. Garoppolo was selected in the second round of the 2014 NFL Draft, was traded for a second-round pick in 2017 and now could be back just one year after Tom Brady left in free agency. It would allow everything to come full circle and get tied up in a pretty little bow.

That being said, Garoppolo also is injury prone, and there’s a limit to his ceiling, as evidenced by the fact that the San Francisco 49ers might simply be willing to wash their hands and be done with him.

In an ideal world for the Patriots, Garoppolo gets cut, and New England scoops him up on a one-year prove-it deal while also drafting a quarterback. The Patriots likely wouldn’t give up more than another second-round pick in a trade, however.

Speaking of former Patriots. Brissett hasn’t really proven himself as a dependable starter, but he could be a bridge option to a rookie quarterback if the Patriots are able to select one in the first round of the 2021 NFL Draft. Brissett knows the system and is good enough to start if needed.

It’s possible that Newton could be considerably better with a full offseason in the Patriots’ system. Is it worth taking that risk if it means another lost season?

Re-signing Newton and drafting a quarterback could create an awkward power dynamic.

Fans want New England to pull some Fitzmagic out of its hat this offseason, and I can’t really tell if it’s genuine or a bit.

Fitzpatrick seems like a fun player to watch. I’m not going to pretend like he’d be the best option on this list, however. The Patriots would also need to select a quarterback in the first round of the 2021 NFL Draft.

The Jets should take a quarterback with the second overall pick in the 2021 NFL Draft and trade Darnold. But what’s he worth?

Maybe you give up a mid-round pick for Darnold as a flyer that he improves with better coaching, but there’s nothing to really suggest that he can be a quality NFL starter.

Mitchell Trubisky
Free Agency
Trubisky’s been better since returning as the Chicago Bears’ starter in Week 12 with a 96 passer rating and 70.1 completion percentage.

He was the second overall pick just four years ago, but he’s been a middling or worse quarterback in that span. Maybe you take a shot on him as a high-upside backup, but that’s about it.

Taylor has some tough luck, having been passed on the quarterback depth chart early in his last two stints with the Cleveland Browns and Los Angeles Chargers by Baker Mayfield and Justin Herbert.

If the Patriots want to sign a veteran, take a QB in the draft and play the rookie early, then Taylor’s track record says he’s their guy.

Winston threw just 11 passes this season behind Drew Brees and then Taysom Hill. He can’t be viewed as more than a backup or bridge option in 2021, and the Patriots didn’t show any interest in him last offseason. We can’t imagine anything has changed since. 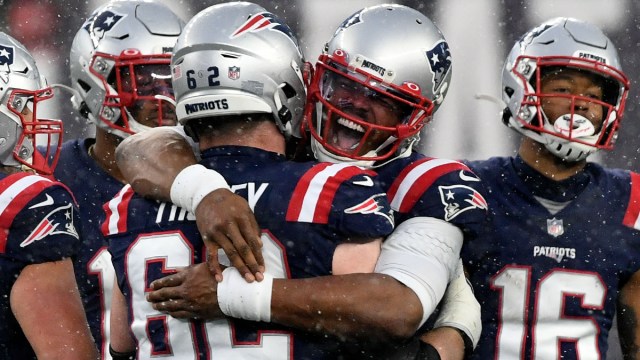 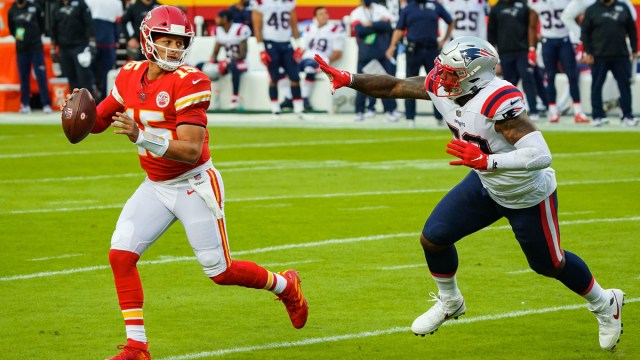