The final minute of regulation probably took years off the lives of Boston Bruins fans, and all there is to show for it is a 1-0 loss to the New Jersey Devils.

First, Patrice Bergeron had a goal called back due to goaltender interference on David Krejci. Then, a bouncing puck looked like it may have crossed the goal line with 8.4 seconds left on the clock, but officials determined it did not cross in its entirety.

The Bruins unleashed 40 shots on net, a 40-29 advantage over the Devils, but their finishing struggles continued in the defeat. Boston’s power play wasn’t able to offer much assistance to its five-on-five as the Bruins were 0-for-4 on the man-advantage.

New Jersey’s Kyle Palmieri scored the lone goal of the game in the first period.

Jaroslav Halak stopped 28 of the 29 shots he faced. New Jersey goaltender MacKenzie Blackwood had 40 saves in the shutout.

TRAILING AFTER ONE
It wasn’t a terrible first period for the Bruins, as Boston got both pucks and bodies to the net early on, but the Devils held a 1-0 lead after the opening frame.

Palmieri scored the lone goal of the period with 3:23 left to give New Jersey the lead. Halak had no chance on the double-deflected tally, which found twine after going off both a stick and then the leg of Palmieri.

The Devils, like they have all season against the Bruins, benefitted from good goaltending by Blackwood, who stopped all nine shots he faced. New Jersey held a 12-9 edge in shots, while the Bruins had an 8-4 advantage in hits.

Boston also had the only power play of the period at 11:27 after Craig Smith caused an illegal check on Andreas Johnsson. The Bruins registered three shots during the man-advantage but still weren’t able to beat Blackwood.

STILL TRAILING
The Bruins had a handful of strong scoring chances in the second, including an Anders Bjork short-handed opportunity late in the period. Still, the Devils maintained a 1-0 advantage after 40 minutes.

Connor Clifton had an impressive nine blocked shots through two periods and helped stifle a big scoring chance by the Devils. The B’s did, however, have four giveaways during the second period.

Bergeron went to the room midway through the period after seemingly taking a shoulder from Trent Frederic, but was back on the bench for the third.

Boston would start the third period on the power play for the opening 1:42 after a tripping penalty on P.K. Subban. It resulted in them having the man-advantage for the final 18 seconds.

It was Boston’s second man-advantage of the game, while the Devils had two power-play chances in the second period. It could have (and maybe should have) been a 5-on-3 to open up the third period, but a trip on Krejci was not whistled in the final seconds of the middle period.

THRILLING FINISH
The Bruins were on the power play for six of the first 10 minutes in the third period. Boston got some good looks in front of the net but mustered just four shots in that span.

The Bruins killed off two Devils power plays, too. Bjork came away with his second impressive play on the penalty kill in the third when he stole the puck from Ty Smith at the blue line, skated it into the Bruins’ offensive zone and tossed it to Charlie Coyle. Coyle had his shot deflected before it got on net.

Halak came away with an impressive save to keep New Jersey’s lead at 1-0 with under four minutes left.

Bergeron had a game-tying goal called back with 1:10 left in the game for goaltender interference by Krejci. And it wouldn’t be the only close call late in the game.

The Bruins got the short end of the stick with just 8.4 seconds left after a review determined the puck did not entirely cross the line.

UP NEXT
The Bruins will host the Devils for a second straight time Tuesday at 7 p.m. ET. 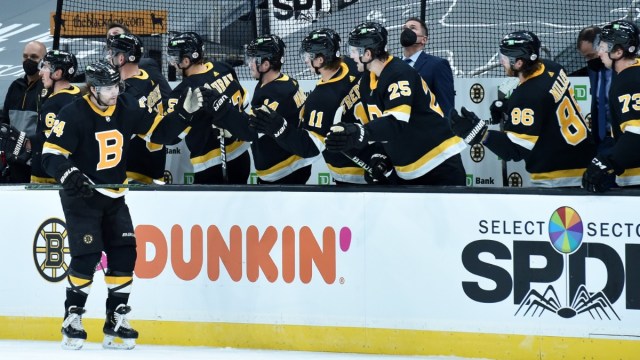 NHL Announces Changes To Bruins’ Schedule After Prior Postponements 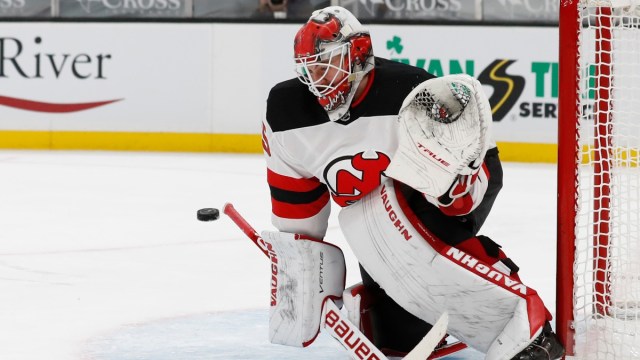