The special City Connection uniforms of the Boston Red Sox have been polarizing.

Fans were vocal about them since they debuted, not feeling the the bright yellow and baby blue look which strays far from the traditional red, white, navy and gray. But now you see the yellow sprinkled all over Fenway Park and on road trips alike, with many really embracing it.

And even the biggest critics must admit — you shouldn’t fix what isn’t broken. And there’s nothing wrong with a seven-game win streak — five of which have come in the bright alternates.

“I love them. I do,” starting pitcher Chris Sale said about the uniforms after a 12-5 win over the New York Mets.

The ace has been a tough critic of gimmicky and impracticable jerseys in the past.

“I know that might be a surprise to some people, but no, I think it’s great. And obviously what it represents means even more to us. I think that that’s it. It’s kind of crazy, right? We’re wearing yellow, we’re wearing baby blue. We’re a red, white, gray, blue team, but it makes it fun, you know?”

The Red Sox debuted the special edition look on April 17 for Patriots Day weekend. The colors pay tribute to the tragic Boston Marathon bombing that brought the city together in 2013. The font on the front is reminiscent of the public transit lettering and the numbers on the back look similar to the Boston Marathon’s finish line. The goal was to connect the community and team to Boston’s underserved neighborhoods in the process.

Red Sox communications manager Bryan Almonte, who also serves as a Spanish translator and works with the marketing and branding teams, had a huge hand in the creative process and worked directly with Nike to make it happen.

Almonte is pleased to see the Red Sox rally around the uniforms late in the season.

“It’s amazing, there’s been an overwhelming amount of positive feedback from the players and this is something they wanted, and being that it?s the last homestand they wanted to bring them back out,” Almonte told NESN on Wednesday.

Almonte said it was a collective effort in working the yellow jerseys back into the rotation for the Baltimore Orioles series. Some players didn’t get a chance to wear the alternate and wanted to.

While they’re winning in them, it’s become part of the routine.

“There’s a pretty good chance, yeah,” manager Alex Cora said when asked if the team would wear yellow against the New York Yankees over the weekend. “I mean, we’re not superstitious, we just love routines. And it just happens that, you know, 6 o’clock those uniforms are there so it’s part of our routine right now.”

Sale, on behalf of his team, is all in.

“I think the fans love it, and like I said what it represents means even more to us and I think you’re gonna see him quite a bit more because we play well in them,” Sale said. “And for now we’re gonna keep that rolling and have some fun with it. We love these unis.” 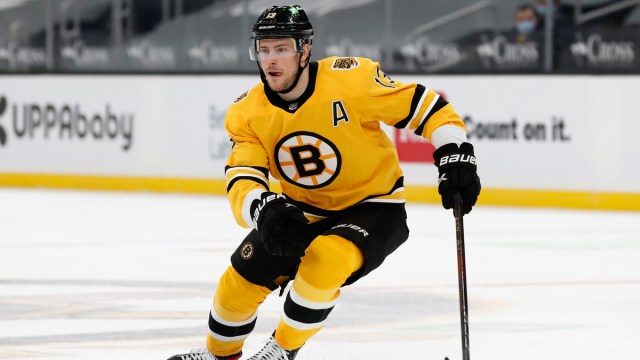