FOXBORO, Mass. — The New England Patriots stumbled through their sloppiest game of the 2021 season on Sunday, losing 28-13 to the New Orleans Saints at Gillette Stadium.

It also was the most uneven showing yet for rookie quarterback Mac Jones, who completed 30 of 51 passes for 270 yards and one touchdown with three interceptions in the loss.

As the Patriots turn the page to next Sunday’s showdown with Tom Brady and the Tampa Bay Buccaneers, here are seven quick thoughts on Jones’ performance against New Orleans:

— The Patriots struggled mightily to keep their rookie QB upright in the first half.

In the opening 30 minutes, Jones was sacked once and hit seven times by seven different Saints defenders. In one especially painful sequence, New Orleans players knocked Jones on his back on three consecutive plays, with the third resulting in the first interception of the first-round draft pick’s young career.

The Patriots again were without starter Trent Brown, who missed his second straight game with a calf injury, but right tackle wasn’t their only problem spot up front. New England’s offensive line, expected to be one of the NFL’s best, has been a major disappointment thus far.

New Orleans was credited with four hits after halftime, including a 13-yard sack that essentially killed a fourth-quarter drive. That sack was on Jones, as he initially was well-protected and should have thrown the ball away.

— Much was made this week about Jones’ lack of downfield pass attempts. The Patriots QB finally aired it out Sunday — with minimal success.

Jones attempted eight passes of 15 yards or more over the first two quarters — including his first two throws of the game — and completed just one of them, according to ESPN Stats & Info. The lone completion was a 17-yarder to Jakobi Meyers.

Jones had several deep misses after halftime, as well, including one shot to Nelson Agholor near the goal line in the third quarter and another to Kendrick Bourne in the fourth. The majority of his deep misses were overthrown.

For the game, Jones went just 1-for-12 of passes of 20-plus yards, per NFL Next Gen Stats.

— Jones lost his most productive pass-catcher early in the second quarter when running back James White suffered a hip injury and had to be carted off the field.

White led all Patriots players in catches and receiving yards entering Sunday and had been an important safety blanket for the inexperienced Jones. Brandon Bolden, who rarely played outside of special teams in Weeks 1 and 2, saw the largest increase in playing time in White’s absence and was not targeted in the passing game until the final two minutes.

The Patriots’ offense had issues even before White’s injury, though, going three-and-out on each of their first three drives.

— Jones’ best stretch of the first half came during a two-minute drill.

With time winding down in the second quarter, he hit Bourne on a quick slant for 31 yards, Agholor for 13 yards and Meyers for 7 yards on his first three pass attempts.

Facing third-and-1 just outside the Saints’ red zone, offensive coordinator Josh McDaniels called a run to Brandon Bolden that was stuffed. The Patriots initially kept their offense on the field on fourth-and-1 but sent the field-goal unit out after tight end Hunter Henry jumped offsides.

— Later, Jones led a 16-play, 72-yard drive that stalled in the red zone. He went 8-for-9 for 73 yards — including a 27-yard hookup with Meyers — and converted two third-and-shorts with QB sneaks. But questionable play-calling by McDaniels stalled the Patriots’ momentum.

Facing first-and-10 from the Saints’ 11-yard line, McDaniels opted for back-to-back handoffs to Bolden that gained zero and -1 yards, then a swing pass to tight end Jonnu Smith out of the backfield that picked up 4. The Patriots settled for a Nick Folk field goal.

Smith endured a miserable game, catching just one pass on six targets for 4 yards with two drops. On the second, he inadvertently batted the ball straight to safety Malcolm Jenkins who returned it for a Saints touchdown.

— Jones got the Patriots back in the game with a quick-strike touchdown drive in the fourth quarter.

Aided by a defensive pass interference penalty, he drove New England 34 yards in three plays, capping it with a 22-yard touchdown pass to Bourne. The wideout made a nice contested catch and did well to keep his feet in bounds.

The Saints put the game away with a Taysom Hill touchdown run on the ensuing possession.

— Jones set up the touchdown to Jones by scrambling for 12 yards and a first down one play earlier. He was the Patriots’ unlikely rushing leader, finishing with 28 yards on six carries. Lead back Damien Harris managed just 14 yards on six totes and played sparingly in the second half. 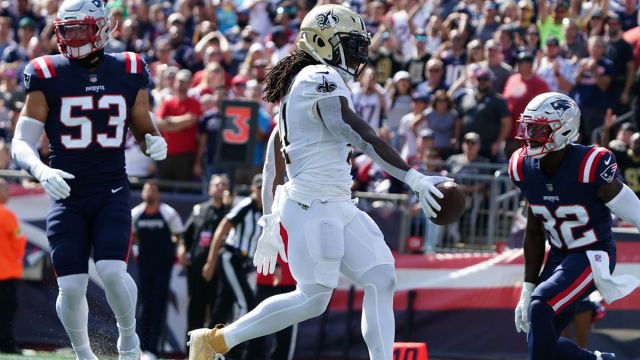 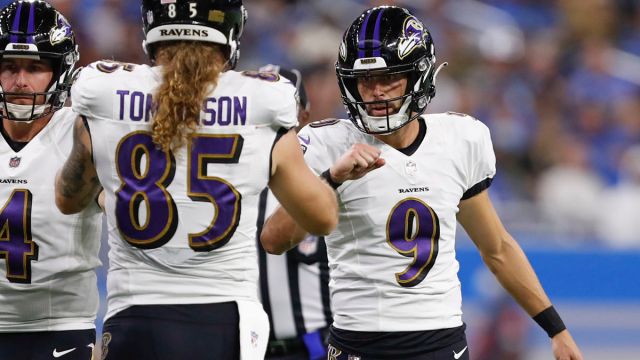