Red Sox pitcher Eduardo Rodriguez didn’t make it through two innings while the Boston offense couldn’t do much of anything against Rays starter Shane McClanahan in what was a 5-0 Game 1 loss at Tropicana Field in Tampa Bay.

ONE BIG TAKEAWAY
The Red Sox put some pressure on as they out-hit the Rays nine to six, but didn’t capitalize when they had men on. The perfect example of that came in the eighth inning, as Boston had bases loaded with one out, but still couldn’t manufacture a run. It essentially ended all hope for Boston.

The Red Sox were given a gift of a base hit as Xander Bogaerts popped up to short left-center field with Christian Arroyo (single) and Kyle Schwarber (single) already on base. The Rays lost the ball in the ceiling — one of four baseballs that got lost in the ceiling at The Trop — and Boston benefitted by loading the bases with one out. It was their lone hit with runners in scoring position. Rafael Devers then struck out for the second out of the frame and Hunter Renfroe popped out in foul ground to end the threat.

Schwarber’s hit with Arroyo on first was just Boston’s second hit (2-for-15 at the time) with a runner on base. The Red Sox finished the game 3-for-18 with at least one runner on and 1-for-7 with runners in scoring position.

STARS OF THE GAME
— Tampa Bay star Randy Arozarena continued his noteworthy postseason production Thursday. First, and perhaps most importantly, the outfielder put the Rays ahead 4-0 with a solo home run in the fifth inning. But not to be out-done was the fact Arozarena stole home with two outs in the seven inning to extend Tampa Bay’s lead to 5-0. He reached base three times as he went 1-for-2 with three runs, two walks and one RBI.

— McClanahan locked it down when he got into trouble and ended with a scoreless five innings of work. He scattered five hits with three strikeouts while throwing 55 of his 82 pitches for strikes.
— Nick Pivetta kept the Red Sox in the game after taking over in the second inning. The right-hander went 4 2/3 innings in relief, at the very least saving arms in the bullpen, while allowing solo home runs in the third (Nelson Cruz) and fifth innings (Arozarena). Pivetta was credited with a third earned run allowed, which probably wouldn’t have happened if Josh Taylor didn’t let Arozarena steal home. He limited the Rays to four hits with four strikeouts.

WAGER WATCH
Rodriguez came up well short of his strikeout propositional bet Thursday night. The Red Sox starter struck out one batter with the over/under set at 4.5 (+110). If you took the under on Rodriguez, a $100 wager made you $110 richer.

ON DECK AT NESN
Immediately following the conclusion of Game 1, you can watch full postgame coverage on NESN. You can also tune into Game 2 pregame coverage on Friday night starting at 6 p.m. ET before first pitch at 7:02 p.m. on FS1. 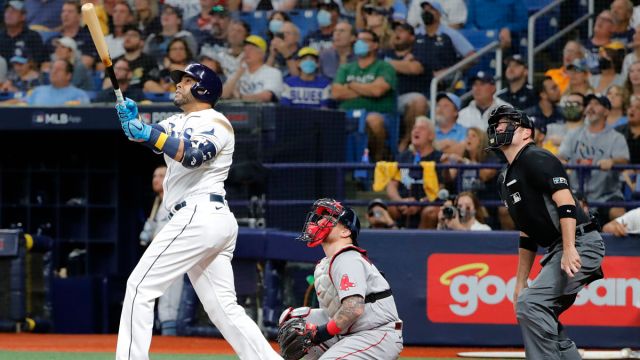 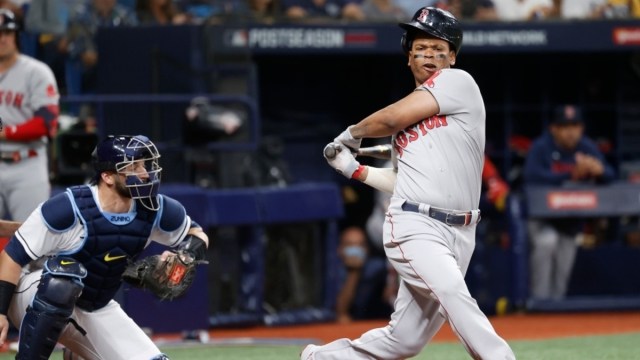