The grab ended up being the only reception for the fourth-year wide receiver as Chicago went on to lose the game to the Green Bay Packers in Week 13. Aaron Rodgers continued to own the Bears, and Alexander threw in his own dig at Chicago, as well.

The Pro Bowl cornerback was asked after the game about Harry’s 49-yard reception.

“Man, that was lucky,” Alexander said, as transcribed by USA Today’s Ryan Wood. “I was getting ready to pick that one too. I was getting ready to pick it, but then he (Justin Fields) held the ball, and he ran somewhere. And as he’s running, I’m looking on the Jumbotron. I’m like, ‘Wow, he really just threw it.’ So I’m like, ‘Oh, snap.’ It was my first time ever seeing a ball get thrown on the Jumbotron while I’m running. It was crazy.”

Fields and Harry beat out Alexander for a play, but the Packers’ strategy to play zone coverage on 100% of pass plays proved to be an effective one. Fields was held to 20-of-25 passing for 254 yards and two interceptions. The Bears quarterback ran six times for 71 yards, but most of that yardage came on a 55-yard touchdown run. Green Bay held the second-year signal-caller to seven yards on two scrambles, according to Next Gen Stats.

The now 5-8 Packers haven’t had a lot to be excited about this season but beating a division rival was one to celebrate as Alexander handed out free potato chips to his teammates for the flight home, according to Wood.

Green Bay isn’t mathematically out of the playoff picture, and it can improve its chances with a Week 15 win over the Los Angeles Rams on “Monday Night Football” after its Week 14 bye. 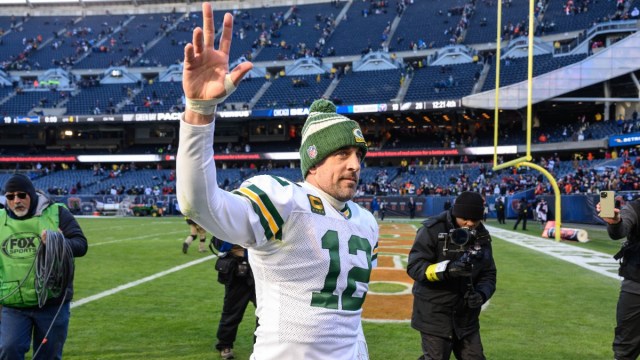