Could Patriots Opt For Dark Horse Given Issues With Top LB Prospects? Skip to content

During the lead-up to the 2022 NFL Draft, the linebacker position seemingly was headlined by two players in Utah’s Devin Lloyd and Georgia’s Nakobe Dean.

NFL analysts might have differed in their opinions about which player would be the first off the board at the position, but they consistently have decided between Lloyd and Dean. Well, recent questions pertaining to the medical histories of both players now are throwing a wrench in that scenario.

“The medical also figures to affect the off-ball linebacker market,” Breer wrote Tuesday in an extensive piece on the draft. “As we mentioned in the MMQB column, Georgia star Nakobe Dean has a laundry list of issues that aren’t disqualifying. However, in totality, they are troubling, given that he’ll enter the league as a smaller player at his position. Utah’s Devin Lloyd has questions in that regard, as well.”

Breer then hinted at the player whose individual stock could benefit most from those questionable reports.

“And that’s left Dean’s teammate Quay Walker as a contender to go first at the position,” Breer added. “The questions with Walker are more about his football IQ and how quickly he’ll pick up an NFL defense. Yes, he played in a pro-style scheme at Georgia. But he didn’t become a starter, despite being 6’4″ and 241 pounds and running a 40-yard dash in the 4.5s, until his fourth season in Athens.” 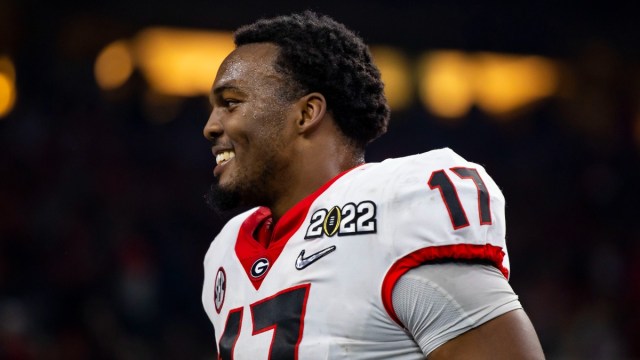 The New England Patriots have been linked to both Dean and Lloyd in multiple mock drafts. Given the fact New England needs to acquire speed and explosiveness on defense, which new director of player personnel Matt Groh recently confirmed, the Patriots very well could go with a linebacker at No. 21 overall. Oddsmakers have the Patriots 3-to-1 to draft a linebacker with those prices behind only a defensive back (+250). But those revelations from an industry expert indicate that teams, perhaps including the Patriots, could go with Walker over Dean or Lloyd. It also may prompt Bill Belichick and Co. to trade back believing that Dean, Lloyd or Walker would be available later in the first or second round, where their values would be higher.

Oddsmakers at DraftKings Sportsbook still have their hierarchy set in a similar order to how it was throughout previous weeks: Lloyd’s individual draft position prop currently is set at over/under 19.5 with Dean (over/under 30.5) and Walker (over/under 32.5) following. In that market, should Lloyd be drafted in the top 19, Under bettors win. In contrast, if he is selected with the 20th pick or later, Over bettors cash in.

Still, they seemingly have heard those murmurs. Lloyd remains the betting favorite to be the first linebacker drafted (-425), but after him is a bit more murky. Dean (+475), though behind Lloyd, holds a slight edge over Walker (5-to-1) as the first linebacker selected. And Dean (-175) holds a bit of an advantage over Walker (+150) as the second ‘backer off the board, too. But those prices don’t indicate as clear of a two-horse race as it was once thought to be.

It certainly will be interesting to see how the Patriots, along with the other 31 NFL teams, view the linebacking group while judging potential risk and reward.