As the Red Sox prepare for the October drama that lies ahead, they can reflect on a season of trials and tribulations.

Especially on their pitching staff. This season, the Red Sox have endured inexperience, old age, injuries, language barriers and every other form of adversity known to man. Through it all, they've persevered, and they've survived with one of the top five pitching staffs in the American League. Yet you rarely hear much praise for the man who led them there.

But in this game, you never know what you've got 'til it's gone. Or at least until a few rumors get thrown around.

Red Sox pitching coach John Farrell, who's been with the team since its World Series-winning 2007 season, was one of the names thrown around last week as a candidate for the Cleveland Indians' managerial position.

With the Indians nursing one of the worst records in the American League despite a solid collection of talent, many around baseball have seen manager Eric Wedge's seat in the Cleveland dugout as a hot one. Wedge has been the Tribe's head honcho since 2003, with a record that includes a 96-win season and an ALCS run in 2007, but his tenure in Cleveland now appears to be winding down.

Enter Farrell? Apparently not. Farrell's name was a natural choice for the Indians' job — he's the former director of player development for the club, having worked there from 2001 to '06, and with three successful years coaching for an elite major-league team under his belt, he appears ready to make the jump to the manager's desk. But luckily for the Red Sox, a contractual loophole will keep the pitching coach in Boston.

Fox Sports' Ken Rosenthal has reported that according to major league sources, Farrell's contract states that he cannot accept an outside managerial position until after the 2010 season.

The Red Sox should breathe a sigh of relief.

Given the current state of their pitching staff, the Sox should consider themselves blessed to have the continuity that Farrell brings. They're currently in the process of developing four promising young pitchers (Clay Buchholz, Daniel Bard, Michael Bowden and Junichi Tazawa) into major leaguers. They have a pair of aces (Jon Lester and Josh Beckett) hoping to stay at the top of their games.

They're working across a language barrier, with four pitchers whose native tongue is Japanese. They're working with a constantly shuffling rotation that's seen 11 pitchers make starts this season. They're juggling bullpen roles at will, moving guys from the eighth inning to the seventh to the sixth. Yet through it all, they've maintained the best relief corps in the major leagues.

It's a complicated system, and it's one that can't be picked up overnight. Farrell is the right guy for the job, and it's a job he's worked hard for.

He was a pitcher for a full decade in the American League, taking the mound for the Indians and Angels, then the Indians again, then the Tigers. He was a top-flight exec for the Indians, grooming a system that was named "Organization of the Year" by USA Today's Sports Weekly for two years running in 2003 and '04.

He groomed a Cleveland system that he knew would one day bloom into a contending team. What happened in 2007, when the Tribe nearly landed in the World Series, proved him right.

And maybe he's the right guy to manage that club someday. But just not yet.

For now, the Sox have their pitching coach securely locked in, and they like it that way. The Red Sox are a better team with John Farrell in their dugout. He may not stay there forever, but they'll sure enjoy it while it lasts. 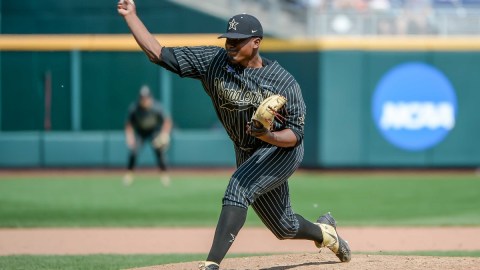