The losing streak had to stop eventually.

After dropping 10 straight at the TD Garden, the Bruins finally prevailed on home ice for the first time since Dec. 30, edging the Maple Leafs 3-2 in a shootout on Thursday night.

The Maple Leafs came from behind twice and once again prevented the Bruins from holding a lead through the third period, but Miroslav Satan's goal in the third round of the shootout finally halted Boston's epic streak of futility at home.

Michael Ryder almost got the B's on the board 1:03 into the game, as he took a dish from Steve Begin in the slot and appeared to tap it in, but further review showed he kicked it past Jean-Sebastiane Giguere. The goal was scrapped and the playing field was leveled, but Satan put Boston up 1-0 midway through the frame.

The Leafs' Viktor Stalberg fought back to tie it about six minutes later, but the B's took over in the second period and headed into the third intermission with a 2-1 lead, courtesy of a Johnny Boychuk bomb.

Once again, Boston squandered a third-period lead, allowing Tyler Bozak to tie things at 2 with 13:48 left.

Satan struck in the third round of the shootout to give Boston the win.

The Bruins rode a very encouraging effort from goaltender Tim Thomas, who made 24 saves on 26 shots in his first start since early February, while Toronto's Giguere finished with 29 saves on 31 shots.

Headliner: Thursday night was the story of the little people coming up big — or, at least, the unexpected sources of offense coming up big. First, Miroslav Satan put the B's on the board with 10:24 left in the initial frame, taking a feed from Shawn Thornton in the slot and wristing it past Giguere. It was his fourth of the season and helped to erase the bitter taste left by Michael Ryder's bid just a minute into the action, which was disallowed after the official review determined he kicked it into the net. Satan also victimized the Leafs in the third round of the shootout.

Then, as the B's started to take over in the latter part of the second period, Johnny Boychuck — in his first game back from a facial fracture, sustained when he took a puck to the face on Feb. 6 — fired off a bomb from the right circle with 4:36 left for his third of the season.

Grinder: As Jack Edwards so eloquently put it, "When doubts have swirled, Tim Thomas has been at his best." In that case, he must have heard Don Cherry's pregame digs, because that credo certainly held true on Thursday night, when he finished with 24 saves on 26 shots in his first start since Feb. 2.

Thomas came up big for the Bruins on two breakaways early in the game — the first of which came courtesy of Phil Kessel with less than a minute remaining in the first — but the second came when Nikolai Kuleman picked Dennis Wideman's pocket and came in on a 1-on-1 against Thomas. If nothing else, it gave Thomas yet another opportunity to prove his worth, as he deflected the bid off his pad.

Weak Link: Phil Kessel continued to be less than impressive in his return to Boston. In three games against the B's prior to Thursday, Kessel had registered eight shots on goal, zero points and a minus-3 rating, and it didn't get much better on Thursday. He finished with four shots and no points in 20:46 of ice time.

Meanwhile, in his Boston debut, new addition Dennis Seidenberg didn't do much to impress the new home crowd. The defenseman, paired with Zdeno Chara, did very little — except register a delay-of-game penalty midway through the first.

Not to beat a dead horse, but Dennis Wideman didn't do anything to deflect attention from what has been a nightmare of a season for him. After Nikolai Kuleman almost turned one of his turnovers into a goal in the second, Wideman lost the puck to Kuleman as the B's came off a power play with 14 minutes left in the third, leading to Tyler Bozak's tying goal.

Key Moment: The Maple Leafs managed to knot the score at 1 with just under five minutes left in the first period and found themselves with another golden opportunity with less than 60 seconds left on the clock. Phil Kessel snagged the puck from Blake Wheeler on a pass attempt in the neutral zone and found himself facing his former goaltender in a 1-on-1, but Thomas held strong. Kessel came in on the backhand and Thomas read it perfectly, sticking out his right pad just in time to make the stop and maintain the tie. He robbed Kessel of a perfect chance to get the better of his old team.

It was just one of many instances in which Thomas held strong against the Leafs and picked up his defensemen as turnovers led to odd-man chances.

Up Next: The Bruins will hit the road for a date with the Islanders at 2 p.m. on Saturday. The Islanders (26-30-8) are currently in fifth place in the Atlantic Division. Twenty-one-year-old Kyle Okposo leads the team with 40 points and 27 assists, while Matt Moulson has registered a team-best 22 goals.

After taking on New York on Saturday, the B's will quickly depart for a matchup against Pittsburgh on Sunday — so it's either going to be a busy four days for Tim Thomas, or Tuukka Rask better heal his lower-body injury quickly to provide some relief. 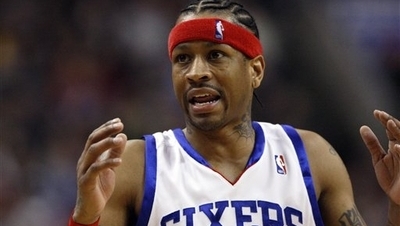 Philadelphia Out of Answers When it Comes to Allen Iverson