BOSTON — Maybe Montreal likes the idea of not being the most hated team in Boston.

The Canucks certainly made a strong claim to taking over the No. 1 spot on Boston fans' hit list with their antics on the ice throughout the Cup Final and again last Saturday, followed by the nonstop verbal sniping ever since. And the Canadiens appear more than willing to let Vancouver be the primary target for Boston's wrath.

Bruins fans may never truly warm to their traditional rivals from Montreal, but the Canadiens may have earned a little respect on Thursday when they refused to pile on when asked about the Canucks' claims that the Bruins are a dirty team.

Subban remained diplomatic when pressed about whether Boston's physical style goes over the line too often.

"I think they're a team that plays a high-energy game," Subban said. "They finish their checks and they have some tough guys that hit you, some real tough guys. They play the game hard. Our team, we're not built to brawl it out every night, but we're going to stick up for each other as a unit, as a group."

Fellow defenseman Hal Gill, who spent the first eight seasons of his NHL career in Boston, echoed those sentiments.

"The Bruins have always been a big, imposing team," Gill said. "They're big and they're strong. They toe that line, that's part of their MO."

Like Subban, Gill also noted that while there's nothing wrong with that approach, it isn't the style the Canadiens are built for and that Montreal would have to try to make it more a speed game to counter Boston's physical advantages.

"They're a physical team," Gill said. "They like to come hard and intimidate with force. I think if you fall into that trap, you're playing their game. We want to play an up-tempo, speed game, play whistle to whistle, give hits, take hits, but it's not about who's tougher. It's about going to the dirty areas and getting the job done and getting the win. That's really what we have to focus on."

The absence of Brad Marchand while he serves his suspension for a low hit on Sami Salo in Saturday's game might help the Canadiens tone down the physical play, but Subban was actually disappointed that he won't be able to go up against Marchand again on Thursday.

"You don't like to see anybody get suspended," Subban said. "He's a good player. He's a big part of their team. That being said, we have to focus on who's in the lineup, and whether it's Marshy or Benoit Pouliot, whoever's on that first line is capable of doing damage so you have to be ready to play."

Subban and Marchand engaged in a memorable string of altercations that finally resulted in an actual fight on their third attempt earlier this season at the Garden, but they also played together for Canada in the World Juniors and have a healthy respect for each other.

Subban stated that he hadn't seen Marchand's hit on Salo yet, but "I've heard a lot about it."

"It's tough," Subban added. "There's a fine line now when you throw a hit, you've just got to pay attention to it."

And if the Canadiens pay attention to their reception at the Garden Thursday, they might find that while they are still far from loved in Boston, thanks to Vancouver the Habs might not be the most hated team in these parts anymore. At least not right now. 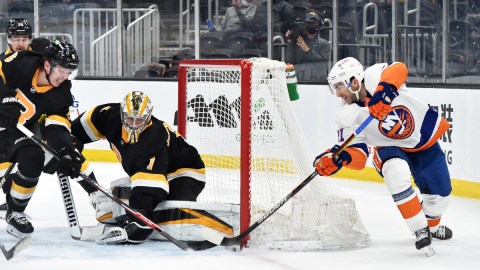