The NHL has suspended Bruins defenseman Andrew Ference for Game 2 of Boston’s first-round playoff series against the Maple Leafs.

Ference was disciplined after a high check on Toronto’s Mikhail Grabovski midway through the first period in Game 1. Ference was not penalized for the hit, but upon further review, the league’s discipline office ruled that he illegally targeted Gabovski’s head with his left elbow.

Bruins head coach Claude Julien has not announced Ference’s replacement for Game 2, but rookie defenseman Dougie Hamilton, who was a healthy scratch on Wednesday after playing 42 games in the regular season, seems to be the logical choice.

Boston defeated the Leafs 4-1 in Game 1.

To hear the league’s reasoning behind the suspension, check out the video below. 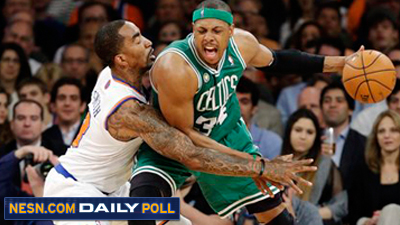 Vote: Who Will Win the Celtics-Knicks Series?