Red Sox' Game 3 Loss Will Be Defined by Obstruction Call, But Umpiring Not to Blame for Wacky Ending - NESN.com Skip to content The biggest thing obstructing the Red Sox from a Game 3 win wasn’t the umpiring.

The Red Sox? loss to the Cardinals in Game 3 of the World Series will forever be remembered for the most awkward finish in postseason history. But while much of the focus will remain on the obstruction call that allowed the Cardinals to score the game-winning run in the bottom of the ninth inning, there were plenty of events that took place prior to Allen Craig stumbling over Will Middlebrooks that led to the game?s outcome.

First of all, let?s be clear. It is — as Jake Peavy put it — a ?crying shame? that a game as exciting and as hard-fought as Game 3 had to end on an obstruction call. We?ve seen so many awesome finishes over the years — with these two teams being at the center of many of them — yet Game 3 ended with a three-ring circus. Even the Cardinals? celebration was awkward.

But amid the mass chaos, the knee-jerk reactions and the outpouring of head-spinning baseball jargon in the aftermath of the game-ending obstruction call, it?s easy to lose sight of the fact that there were other contributing factors in the Red Sox? loss. In fact, the umpiring wasn’t an issue at all.

John Farrell was recently voted Sporting News’ American League Manager of the Year, and for good reason. He?s done a tremendous job steering the Red Sox? ship this season after Boston lost its way in 2012. Farrell has in few instances, however, opened himself up to criticism by way of in-game managerial decisions, and the Sox skipper made a few head-scratchers in Game 3.

Farrell?s most puzzling move was letting Brandon Workman, who pitched the eighth inning, bat with one out in the ninth inning with the score tied 4-4. Mike Napoli, David Ross and Quintin Berry were left on Boston?s bench, yet Farrell kept the rookie in there with the intention of getting more than one inning out of him. Farrell then turned around and brought in Koji Uehara after Yadier Molina?s one-out single in the bottom of the ninth.

Farrell after the game expressed regret over not using a double-switch when inserting Workman into the game in the eighth. He easily could have slid Workman into the lineup spot occupied by Jarrod Saltalamacchia, who made the final out of the eighth inning, while bringing in David Ross to catch and bat out of the No. 9 spot in the Red Sox’ order. Such a move would have eliminated the decision over whether to let Workman bat in the ninth inning.

?In hindsight, probably should have double-switched after Salty (Jarrod Saltalamacchia) made the final out the previous inning, with Workman coming in the game. I felt like we get into an extended situation, which that game was looking like it was going to ? held [Napoli] back in the event that spot came up again,? Farrell said. ?In hindsight, having Workman hit against [Cardinals closer Trevor Rosenthal] is a mismatch. I recognize it, but we needed more than one inning out of Workman.?

Coincidentally, there was an instance earlier in the game when Farrell probably should have let his pitcher bat. Felix Doubront was the first pitcher used out of the Red Sox? bullpen, and he tossed a scoreless fifth inning and sixth inning. When Doubront?s spot came up in the top of the seventh inning with two outs, no one on base and the score tied 2-2, Farrell turned to Jonny Gomes, who flied out to center field.

One has to wonder if the Red Sox would have been better off preserving Gomes for a different pinch-hit situation and sending Doubront out for one more inning. Craig Breslow and Junichi Tazawa sputtered in the seventh inning, which allowed the Cardinals to grab a 4-2 lead at the time.

The biggest miscue of the game, however, came on the final play. And no, it wasn?t made by the umpires.

Saltalamacchia should have held onto the ball rather than force a throw to third base. Sure, Craig, who just returned from a foot injury, isn’t running well, but Breslow’s errant throw that cost the Red Sox Game 2 should have been cautionary enough for Saltalamacchia to reconsider throwing the ball around. Even with Craig running, it wasn’t exactly a high-percentage play.

To avoid placing all of the blame on Salty, it’s worth noting that Will Middlebrooks probably should have handled the throw, even if it was a difficult play to make. At the very least, that ball needs to be knocked down. Everything that occurred after Saltalamacchia’s errant throw was simply a fluky sequence of events that never should have been allowed to happen.

The obstruction call certainly ruffled some feathers, and it can be looked at in any number of ways. The call was in line with what the rule book states, though, so the blame for the Red Sox’ Game 3 loss shouldn’t be directed toward the boys in blue. 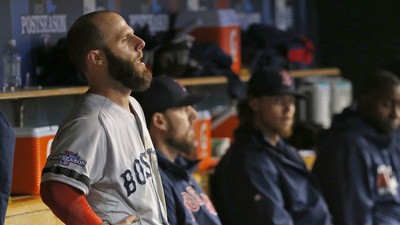