Final, Nets win 104-96: Credit the Celtics with waking the Nets up from their stupor. Maybe this was just the jolt the massively underachieving Nets needed to fulfill their potential.

For all the criticism Jason Kidd has endured, the Nets (7-14) actually looked pretty well-coached, particularly in the third quarter, when they got into the lane at will and lit up Boston’s defense. They shot 55 percent from the field and outscored the Celtics (10-13) in the paint 48-30.

Brook Lopez was dominant with 24 points on 10-for-13 shooting, easily scoring over the undersized Brandon Bass, who had a forgettable offensive night as well. Deron Williams, in his first game back after his most recent battle with an ankle sprain, led all scorers with 25 points.

Avery Bradley led the Celtics with 22 points, but his scoring came in spurts as nobody else on the team came through with a consistent offensive contribution to help the Celtics maintain a reliable attack.

Fourth quarter, :33.7, Nets 104-93: All right, now it’s over. Bass, who appeared to hurt his arm while wrestling for a rebound with Garnett, stayed in the game and looked fine — until he airballed a jumper.

It’s been that kind of night for the Celtics, who have met the Nets on a night when they brought their “A” games.

Fourth quarter, 1:25, Nets 99-91: Stevens has not been happy with the officiating here and he’ll be even less happy now. Referee Courtney Kirkland was primed to make a call — any call — as soon as the Nets lined up to make a inbounds pass.

Once the pass was made, Kirkland jumped on it. He called Green for a defensive foul that gave Lopez a pair of free throws.

Fourth quarter, 1:35 Nets 97-91: Don’t flip over to the Bruins game just yet. The Celtics — led by Bass and Crawford, obviously — are still in striking distance. Neither has played well at all, but they have each contributed baskets to help the Celtics pull as close as five points. Bass and Green even appeared to have two clean blocks on Garnett, but Green was called for a foul.

Fourth quarter, 4:04, Nets 94-84: Bass finally gets some relief on his tough-luck night when a short jumper hits the rim, bounces straight up and plops through the net. His rough night has mirrored that of the Celtics, who still have a shot — but only if Crawford tightens things up.

Fresh off his conference player of the week award, Crawford has not played well in the slightest. He’s forced multiple shot-clock violations with his overdribbling and he is a team-low minus-18 despite having 13 points. This game isn’t out of reach, unless the Celtics keeping playing like they are. Then, it is out of reach.

Fourth quarter, 6:30, Nets 91-81: Bradley just will not go away. He’s already ripped Brooklyn guards twice and gotten fouled on the layup on the other end. It was almost a shock when he missed a corner three, but it was OK, because Green canned a three from the other corner.

The Celtics still have a lot to shore up defensively and need a better way to consistently generate better shots on offense, but they’re not going to just hand a victory to their old buddies.

End of third quarter, Nets 85-72: It’s been a few weeks since the Celtics got carved up like this, but that’s exactly when Lopez, Williams and the Nets are doing.

The Nets are dominating points in the paint 46-24 thanks in large part to Lopez. Pierce, who you may have heard used to play for the Celtics, hit a pair of free throws to finally give him his first points against his old team. But while Pierce may not have had much impact, his fellow former Celtic Garnett has.

Garnett’s midrange jumper hasn’t been quite as deadly this season, but you wouldn’t know it watching this game. He’s 5-for-8 from the field and is one of five Nets in double figures. On the Celtics’ side, another guy known for his jumper, Bass, has been completely off. Bass is just 2-for-9 from the field, meaning he’s having a rough time at both ends.

Third quarter, 4:08, Nets 78-66: Kidd is a certifiable genius. The embattled coach is giving the ball to Lopez … and that’s it.

Lopez is on a roll, towering over whichever defender the Celtics throw at him. The Nets big man has 22 points on 10-for-11 shooting. If the Nets are just going to run the “Lopez doesn’t miss” offense, it’s not really fair.

Third quarter, 9:39, game tied 60-60: Kidd — judging by the Nets’ shooting stats — doesn’t really believe in the three. That’s fine for the Celtics, because they do. And it’s pulled them back into this game.

Sullinger opened the second half by canning a triple and added another, sandwiched around a corner try by Green, as the Celtics have opened the third quarter on a 13-4 run to knot up the score.

Halftime, Nets 56-47: The lazy, disinterested Nets have been the aggressors in this game, bolstering the claim that this team remains dangerous if and when they ever figure it all out.

The Nets have held the Celtics to 45 percent shooting while hitting 66 percent of their own shots and by being more aggressive to boot. The Nets have gotten nine free throw attempts by feeding Lopez and getting to the cup, while the Celtics have had little interior presence after the opening minutes.

Lopez has 16 points while missing just one of his eight shots. The Celtics have only really gotten an offense from Bradley, who leads the team with 15 points. Sullinger has nine points, but he’s needed 10 shots to get there and has nullified any offensive contribution by committing three personal fouls.

The Celtics were able to pull within two points a couple of times, but the Nets woke up to hold them off each time. A three by Joe Johnson puts Brooklyn back up by seven and forces a timeout by Stevens.

This might actually be a good sign for the Celtics. Clearly, Kidd and Stevens are exchanging runs and timeouts in a bit of a chess match. That would certainly seem to favor Stevens in the long run.

Second quarter, 5:53, Nets 41-37: Bradley is almost single-handedly making this game. Garnett and Pierce must be thinking they taught him a little too well.

Bradley drained another corner three and is now 3-for-5 from downtown. His last miss even turned into something positive for Boston. Kris Humphries, playing his old team, grabbed the offensive board and hit a cutting Bradley for a layup. He’s scored the Celtics’ last 10 points.

The Nets are definitely playing with greater defensive intensity than they have all season, which has kept the Celtics’ field goal percentage in the 30s for most of the first half. That’s nice and all, but where was this in the first 20 games?

Second quarter, 8:17, Nets 37-30: Not having a primary playmaker has made the Celtics have to work harder for their shots that usual, but they might actually be starting to figure it out. Courtney Lee made a couple of nice dribble drives into the lane to find Sullinger for an and-one layup and Avery Bradley for a corner 3-pointer.

The Celtics pull within seven, which is close enough for Jason Kidd to get a little worried and call timeout. I wonder how much of the lead is Kidd’s own work and how much is a product of Lawrence Frank’s written reports?

End of first quarter, Nets 31-20: It would make way too much sense for the first-place Celtics to just beat the lowly Nets. So, naturally, the Nets lead by double digits after 12 minutes.

Led by the bruising interior scoring of Brook Lopez, the Celtics finished the quarter on an 18-6 run to take the largest lead of the game for either team. Jordan Crawford, who has played so well all season and is fresh off an Eastern Conference player of the week nod, went way too far back to his shoot-first roots in the first quarter and the Celtics’ offense struggled as a result.

With Crawford, who has six rather inefficient points, threatening to go off the reservation, Brad Stevens had to turn to a second unit devoid of offense. Gerald Wallace committed two turnovers in his first two minutes of action, helping undo all the work Sullinger, Green and Bass did to get Boston the lead.

Paul Pierce also entered the game and has so far focused on creating offense for his teammates. He has two assists and has attempted just one shot, which he missed.

First quarter, 4:27, Celtics 18-17: Jared Sullinger and Jeff Green clearly came out aggressive against their former teammates, as did Kevin Garnett, who isn’t used to asserting himself offensively this year.

Green came out attacking the basket and Sullinger demanded his touches in the post. They even combined on an aggressive play when Green took the ball coast-to-coast off a missed free throw. Green missed the layup but Sullinger was there for the putback slam.

Garnett’s fired up, as usual. He wasted no time posting Brandon Bass for an up-and-under finger roll and then took Green to the left block for a turnaround jumper.

6:18 p.m.: Paul Pierce will play, after all, in the first game that counts against his former team.

Pierce will suit up and come off the bench for the Nets against the Celtics, the team he played 15 seasons with. That means this really will be a reunion with both Pierce and Kevin Garnett in the lineup.

This meeting was highlighted by Celtics fans since the schedule was released, with some calling it the biggest or most important game of the season so far. In a way, Celtics coach Brad Stevens thinks so, too.

“I agree,” Stevens told reporters, “because it’s the one we play tonight.”

The Nets have been a huge disappointment, but with two future Hall of Famers and three other All-Stars, they remain dangerous and fully capable of handing the first-place Celtics a letdown defeat. Yes, the Celtics are at the point where they can have “letdown” games. That’s where we are, people.

3:57 p.m.: Paul Pierce was officially dubbed “doubtful” against the Celtics, but it seems uncertain just how doubtful he is after saying on Monday that there is a “good chance” he could play.

Kevin Garnett, who missed both preseason meetings, should play tonight.

8 a.m. ET: This certainly isn’t how things were supposed to work out for these two teams.

If you had this game highlighted on the schedule before the season — let’s be honest, who didn’t — you probably had one team penciled into first place and the other wallowing down at the bottom of the standings. That’s indeed the case, just not in the way anybody expected.

The first-place Celtics (10-12) head to Brooklyn to take on the Nets (6-14), who are even worse off than most teams in the horrendous Eastern Conference. Coming on the heels of a 41-point win in Manhattan on Sunday, this game gives the Celtics a chance to pull off the New York City sweep in addition to reuniting with two of the franchise’s greats.

Kevin Garnett should be good to go, although Paul Pierce’s status is unclear. Pierce seemed sure to miss the game when he broke a bone in his shooting hand a week and a half ago, but he told reporters on Monday that there is a “good chance” he could suit up. Check back here on Tuesday to see how Pierce’s status develops. 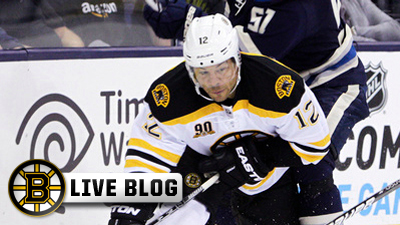 Bruins-Flames Live: B’s Score Pair of Third-Period Goals, Come From Behind for 2-1 Win 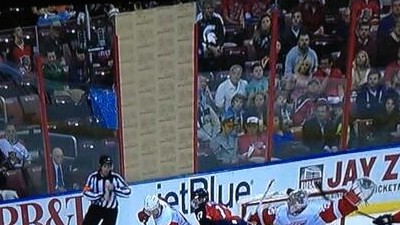