Bruins-Blackhawks Live: B's Dominant As They Roll To 3-0 Win Over Chicago - NESN.com Skip to content Third period, 17:05, Bruins 3-0: Tuukka Rask hasn’t had to make many sensational saves, but he just made one that sure looked nice.

Jeremy Morin’s wrist shot from the left wing was gloved by the Boston goalie, and he now has 28 saves on the night.

Third period, 15:33, Bruins 3-0: The Bruins just went a long time without a shot until Loui Eriksson made another nice play along the boards.

The winger chipped the puck to himself off the boards as he skated by the Chicago defender into the zone and then put the shot on net. However, Corey Crawford made the save as Eriksson put it right in the goalie’s bread basket.

Third period, 9:50, Bruins 3-0: The Bruins have killed off the penalty, thanks in part to a couple of big saves from Tuukka Rask.

Third period, 7:24, Bruins 3-0: The Blackhawks will get a power play to try and cut into this lead.

Chris Kelly was just called for hooking, and the Chicago power play goes to work.

Patrice Bergeron scored a second-chance goal from the left wing, but the goal was initially waved off. That’s because the net was off the moorings as it went over the goal line. The reason it was off, however, was because Corey Crawford pushed it off.

The play was reviewed, and Bergeron’s goal stands.

Carl Soderberg continues to be red-hot as he just scored his 14th goal of the season, as he jumped on a puck in front of the net. A shot from the point was deflected in front and went right to the charging Soderberg who roofed it over Crawofrd’s glove hand.

End second period, Bruins 1-0: For really the first time all period, the Blackhawks were able to put together a couple of good shifts in the final minutes of the period that led to three or four shots on goal, but none of them were particularly difficult. Tuukka Rask made a couple of routine pad saves to stop the best chances from Johnny Oduya and Marian Hossa, which ensures the Bruins will have the one-goal lead through two periods.

Second period, 15:00, Bruins 1-0: The Boston third line has had a real nice period, and they had the Bruins’ latest scoring chance.

Loui Eriksson made a really nice play along the walls at his own blue line to move the puck ahead to Carl Soderberg. The center then carried the puck into the zone down the right wing. He waited for a shooting lane to open up, and when one didn’t, he found the trailing Dougie Hamilton. Unfortunately for the Bruins, Hamilton’s shot went over the net.

Second period, 12:53, Bruins 1-0: The Bruins are starting to knock a little harder on the door.

The B’s just had two good scoring chances in the Chicago zone, the first coming off of a Brad Marchand shot from the left slot. Corey Crawford made a blocker save, but he couldn’t control the rebound. David Krejci was skating around the net and got to the front of the net to grab the rebound, but Crawford made the save on that as well.

Second period, 8:00, Bruins 1-0: Patrice Bergeron almost added his second tip-in goal of the evening when he tried to redirect a shot-pass from Reilly Smith on an odd-man rush.

Bergeron’s shot was stopped by Corey Crawford, though. Duncan Keith did a good job of tying up Bergeron in front, while the back-checking Jonathan Toews made sure Brad Marchand couldn’t pounce on the rebound.

Second period, 3:00, Bruins 1-0: Andrew Shaw had a near-breakaway, but Matt Bartkowski recovered nicely and knocked the Chicago forward off the puck.

Shaw then went crashing into the end boards and while the collision made a loud noise, Shaw bounced up and appeared to be fine.

Second period, 0:37, Bruins 1-0: The Bruins’ power play is over, and the Blackhawks are back to full strength.

Second period, 0:01, Bruins 1-0: The second period has begun where the Bruins will have a brief 12 seconds of carry-over power-play time.

End first period, Bruins 1-0: The first period has come to an end with the Bruins holding the 1-0 lead. They’ll get 12 seconds of power-play time to open the second period as well.

Boston ended up outshooting Chicago 10-8, despite the Blackhawks’ early 6-1 lead in shots.

Niklas Hjalmarsson just picked up a tripping penalty after getting his stick caught in David Krejci’s skates.

First period, 16:01, Bruins 1-0: The Blackhawks are getting a strong effort out of their second and third lines so far. Brandon Saad has been one of the better players on the ice thus far and has already attempted five shots on goal.

This is one of the reasons the Blackhawks are so dangerous. They have the depth to match another deep team like the Bruins, and Joel Quenneville is pretty good at finding the best matchup for his team, even on the road with the last change.

First period, 11:50, Bruins 1-0: Despite being outplayed for much of the first period, the Bruins are on the board first.

Matt Bartkowski made a nice play from the left point to make a slap pass through the slot. Patrice Bergeron came through the slot as the puck was skidding toward the net, and Bergeron redirected it by Corey Crawford.

First period, 6:26, 0-0: The Blackhawks controlled the pace in the game’s opening minutes, but the last minute or so has belonged to the Bruins.

That’s thanks in large part due to the Boston first line. Milan Lucic just got a breakaway down the left wing. He tried to get the puck back to a trailing Jarome Iginla, but the pass was just off the mark. The B’s controlled the puck after that and got a couple of shots on goal from the point but couldn’t break through.

The B’s are being outshot 6-3 right now.

First period, 3:38, 0-0: The Bruins have killed off the Matt Bartkowski penalty.

Chicago had a couple of chances but couldn’t get enough traffic in front of Tuukka Rask to be able to break through.

Matt Bartkowski is being sent off for holding after he attempted to slow down a streaking Patrick Sharp. The Blackhawks forward had the step on him, and Bartkowski ended up wrapping him up to slow the rush.

7:10 p.m.: Nice job by the Bruins who had a moment of silence for the two fallen Boston firefighters prior to puck drop. The B’s’ also had Johnny Bucyk drop the ceremonial first puck as part of 1950s night.

6:50 p.m.: Warmups have wrapped up at TD Garden, and it looks as if Andrej Meszaros will be a healthy scratch once again.

The defenseman appeared to be the odd man out during pregame warmups, and if that is the case, this will be his second healthy scratch in as many games.

6:30 p.m.: The Bruins have taken the ice for pregame warmups, and they are wearing Boston Fire Department caps in a tribute to the two fallen Boston firefighters who gave their lives in the line of duty Wednesday.

6:10 p.m.: Good evening and welcome into TD Garden where puck drop is an hour from right this minute.

The Bruins and Blackhawks will be playing for the first time since Game 6 of the Stanley Cup Final, and they will be doing so in front of a large number of Chicago fans apparently. When I was walking through North Station a short while ago, there were a ton of fans walking through and wearing Blackhawks jerseys, certainly more than there are for just about any other visiting team save for Montreal or Toronto.

This game will also be a celebration of the 1950s as part of the Bruins’ ongoing 90th anniversary. Bruins legend Johnny Bucyk will be on hand to drop the ceremonial first puck.

12 p.m.: Corey Crawford was the first Blackhawks goalie off the ice at Chicago’s morning skate, which means we’ll have a rematch of last year’s Stanley Cup Final goaltending matchup with Crawford going against Tuukka Rask.

11:40 a.m.: The Bruins weren’t tipping their hand much at morning skate, but the B’s did have full participation, which includes eight defensemen. Andrej Meszaros and Corey Potter were the healthy scratches on Monday night against the Montreal Canadiens.

For the Blackhawks, it appears that both Jeremy Morin and Bryan Bickell will be out of the lineup, at least according to the line rushes at the Hawks’ morning skate. Finnish prospect Tuevo Teravainen, who made his NHL debut a week ago against Dallas, was on a line with Brandon Saad and Ben Smith on Thursday morning at the Chicago morning skate.

10:55 a.m.: This should likely come as no surprise, but Tuukka Rask was the first goalie off the ice at Bruins morning skate indicating he’ll get the start against Chicago.

8 a.m.: Thursday night is, in theory, just another game on the NHL’s regular season schedule for the Boston Bruins and Chicago Blackhawks. However, it will likely feel like there’s a little bit more riding on this one.

The B’s and Hawks are meeting in Boston on Thursday night for the first time since Chicago hoisted the Stanley Cup with a shocking Game 6 win over the Bruins. The two teams have met since, with the Blackhawks earning a shootout win over Boston on Jan. 19 at the United Center in Chicago.

This, however, will be a little bit different, as it allows the Blackhawks to return to the scene of the crime. The last time they were on the TD Garden ice, they were moonwalking in celebration right in the middle of the rink. Things have changed some since then, but one thing remains very much the same: Thursday’s matchup will be a clash of two of the NHL’s best teams.

The Bruins come in as the league’s hottest teams. The B’s saw their 12-game winning streak snapped Monday in a shootout loss to the Montreal Canadiens, but they still have points in their last 13 games and are in a battle not only for the Eastern Conference’s No. 1 seed but also for the league’s best record.

The Blackhawks haven’t been as dominant, but they’ve still won two in a row and six of their last 10. They’re trying to hold off the Colorado Avalanche for the second spot in the Central Division, which would earn them home-ice advantage in the first round of the playoffs. Regardless of where exactly the Hawks sit in the standings, Bruins coach Claude Julien knows what’s in store for his team Thursday night.

“I think both teams — ours and then Chicago?s — have been a real good matchup,” Julien said after practice Wednesday. “I think in the playoffs last year, it was really fun hockey to watch. Even as a coach it was a great series to coach. Hopefully, we don?t disappoint anybody (Thursday night) in regards to that.”

Puck drop from the Garden is set for 7 p.m. 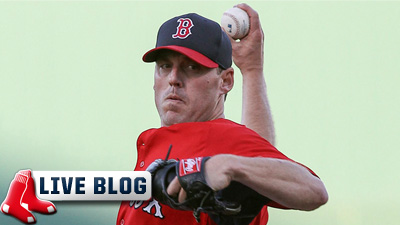 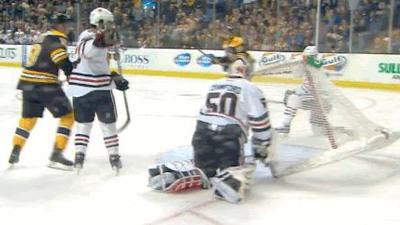