If Tuesday?s game was a hamburger, Boston Red Sox starter Jake Peavy would throw away the bun.

The middle innings were quite delicious for Peavy, who retired 14 in a row at one point in Tuesday?s 5-3 loss to the Cleveland Indians at Progressive Field. However, the impressive stretch was sandwiched by a gross beginning and a finish that left a bad taste in the right-hander’s mouth.

The Indians didn?t exactly knock the ball around the yard against Peavy in the first inning, but they jumped out to a 3-0 lead behind five consecutive hits to begin the game. Michael Brantley plated the game?s first run with a single into right field, and Lonnie Chisenhall made it 2-0 with a bloop single into left-center. The third run scored when Ryan Raburn grounded into a 6-4-3 double play that marked the first two outs of Peavy?s outing.

?This is a tough one to lose,? Peavy said after the game. ?I don?t know if I?ve ever started a game with five straight hits that are all singles and balls just perfectly placed. I feel like I made pitches there in the first (inning) no different than I did for the rest of the game, for the most part.?

Yan Gomes led off the second inning with a dribbler to the left side of the mound. Peavy charged off the bump to field it, but he fired an ill-advised throw beyond first baseman Brock Holt. Gomes advanced to second base on Peavy?s throwing error, which actually signified the end of Cleveland?s hot start.

Peavy retired the next 14 until surrendering a two-out single to Chisenhall in the sixth inning. It was a stretch that kept the Red Sox in the game and ultimately allowed Boston to tie the score at three apiece on Dustin Pedroia?s RBI double in the seventh inning.

Michael Bourn delivered the game?s big blow, though. The Red Sox turned to Andrew Miller with one out in the bottom of the seventh for a lefty-lefty matchup after Peavy allowed the first two batters to reach. Bourn built on his solid numbers against Miller, driving a two-run double over Jonny Gomes’ head to give the Indians a 5-3 lead. Bourn now is 5-for-7 in his career against Miller.

?You feel good with any guy down there (in the bullpen) coming in, especially lefty-on-lefty there with Bourn with (Miller’s) slider. You feel good,? Peavy said. ?Tonight was a grind. When you give up three (runs) before you get an out, it?s a grind and it could have been as gratifying of a start as I?ve had all year, and then it goes to how you feel now. It hurts.?

The decision to bring Peavy back out for the seventh inning — in hindsight a questionable move since he allowed the first two guys to reach — was somewhat surprising. Red Sox manager John Farrell saw it as a no-brainer, however, especially given the roll Peavy was on going into the frame.

?We?re in the bottom of the order, a right-hander?s coming and he was at 94 pitches, I believe,? Farrell said. ?He had been settled into a very good rhythm, made a number of good pitches throughout the middle innings and through the sixth. No, at 95 pitches, he?s still in good shape, I thought.?

The Red Sox?s bullpen has been so good all season at preventing inherited runners from scoring. Miller couldn?t wiggle out of the jam created by Peavy in the seventh, though, and the Red Sox now find themselves having lost two in a row on the heels of their recent seven-game winning streak.

There was a point Tuesday when things started looking very tasty for the Red Sox. The enjoyment didn?t last long, and Boston walked away from the table feeling a little bit of self-loathing. 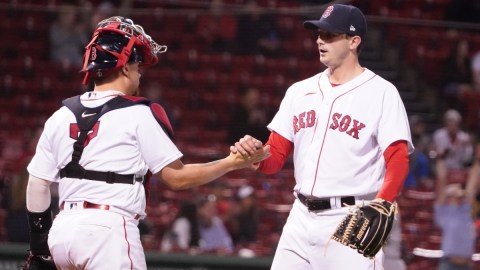