The Boston Bruins were outplayed throughout Wednesday night’s road game against the Pittsburgh Penguins, but they didn’t let frustration prevent them from battling back and earning a much-needed 3-2 win in overtime.

The Bruins will return to TD Garden for a Thursday night matchup versus the New Jersey Devils in the second game of a back-to-back, but first let’s revisit what happened in this one:

Playing alongside Bergeron seemed to energize Lucic, who played the power-foward style of hockey that makes him incredibly difficult to defend. He skated well, went hard to the net, took huge hits to make plays and consistently won puck battles in all three zones.

It’s too early to tell if Julien will keep this line intact, but it wouldn’t hurt to give it more ice time Thursday night against the Devils.

2. Tuukka Rask Gave Another Fantastic Performance
The Bruins played another lackluster first period, but they still weren’t trailing because of Rask’s excellent play in the Boston net. He made 11 first-period saves, 25 through two periods and 37 on 39 shots for a .949 save percentage through 65 minutes.

Pittsburgh had an 18-14 scoring chance advantage, per War on Ice, but Rask helped keep the seventh-highest scoring offense to just two goals with several clutch saves after defensive breakdowns. He fought throught net-front traffic to make saves and moved well from post to post when the Penguins used great puck movement to open shooting lanes and create scoring opportunities.

Even though the Bruins haven’t won many games since the New Year, Rask has consistently given his team a chance to win.

3. Claude Julien Shortens His Bench
The Bruins had to win Wednesday night, and Julien did whatever was necessary to help his team secure two points, which included shortening his bench to about 10 forwards for the final 40 minutes of regulation and overtime.

Seth Griffith played 5:21 and didn’t see the ice over the final 27:30 of regulation plus the overtime period. Craig Cunningham received just 4:45 of ice time, played one shift early in the third period and didn’t take the ice again.

You can’t blame Julien for not giving much ice time to young, inexperienced forwards such as Griffith and Cunningham when the Penguins were out-shooting the Bruins in the third period. He needed his veterans on the ice, especially against the Sidney Crosby and Evgeni Malkin lines.

4. Evgeni Malkin Produces Against the Bruins
Malkin scored just 56 seconds into the third period with a powerful, super-accurate shot that beat Tuukka Rask up high.

It was the Russian center’s third goal against the B’s this season — he scored twice in Pittsburgh’s 3-2 overtime win Nov. 24 at the Garden. Malkin also picked up an assist on Beau Bennett’s first-period goal with a pretty pass from behind the net. 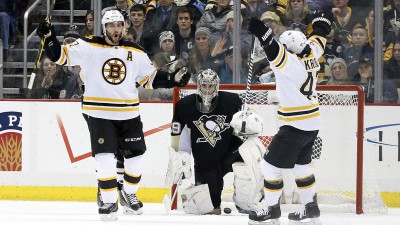 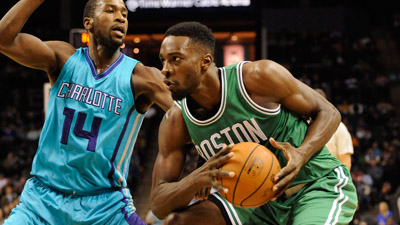 Report: Jeff Green Being Targeted By Grizzlies For Potential Trade