BOSTON — Patrice Bergeron has been the Bruins’ most valuable player this season, but his linemate Brad Marchand is not far behind.

Marchand scored a pair of clutch goals Saturday afternoon to give the B’s an much-needed 3-2 overtime win over the Philadelphia Flyers. The victory increased Boston’s lead over Philadelphia to five points in the race for the last wild-card playoff spot in the Eastern Conference.

“We do have a very tough stretch coming up,” Marchand said. “Eleven games in 18 days and a lot of tough teams. A lot of teams we?re battling with to get in the playoffs. Every night is going to be like a playoff game, (Saturday) was especially. To win in the fashion that we did, it?s a big moral boost for the guys and we want to feed off that.”

The Bruins went on the power play late in the third period trailing 2-1 and head coach Claude Julien decided to pull goaltender Tuukka Rask for a 6-on-4 man advantage. Marchand hasn’t received much power-play time this season, but he was on the ice as the extra attacker, and it proved to be a great decision by Julien.

After creating several quality scoring chances, the Bruins finally scored when Marchand deflected a Dougie Hamilton shot from the point past Flyers goalie Steve Mason to tie the score with just 14.1 seconds remaining.

The Bruins and Flyers traded quality chances in overtime and Rask stopped a Jakub Voracek breakaway and a 3-on-1 rush to keep his team alive. Marchand rewarded his goaltender’s work by scoring the game-winning goal with just 1:08 remaining. His backhand shot deflected off a Flyers player and Mason couldn’t get his glove on the puck.

The Bruins would be in a much worse position in the standings without Marchand’s excellent play at both ends of the ice this season. He leads the team in goals with 21, is tied for 2nd in scoring with 37 points and is fourth in shots with 145. In fact, Marchand has been one of Boston’s most consistent scores throughout his career.

Marchand also has been a great driver of puck possession alongside Bergeron. His 57.8 Corsi-for percentage during 5-on-5 play ranks second on the Bruins behind Bergeron and fifth among all NHL forwards. Marchand’s 61.2 scoring-chance for percentage is the second-best in the league among forwards with 750 minutes played. Put simply, the Bruins turn good defense into offense, spend a lot of time in the attacking zone and create more scoring chances when the Bergeron/Marchand duo is on the ice compared to their teammates.

Marchand has accomplished all of this while facing the second-toughest competition (1.389 CorsiRel QoC, per Behind the Net)  of any B’s forward and tougher zone starts than all but four Bruins forwards at even strength. The penalty kill also has been an area of strength for Marchand this campaign. He’s averaged 1:21 of shorthanded ice time and him and Bergeron have formed one of the league’s best penalty killing duos.

The Bruins will need many more excellent performances from Marchand if they are going to secure a playoff spot, but he’s not afraid of that kind of pressure.

“I think everyone wants to be in that situation,” Marchand said. “It?s one I?ve always wanted to be in. I?ve always enjoyed the emotion of being out there in the last minute of a game or the last couple minutes down by a goal.

“I think a lot of guys tend to thrive in that situation and I prefer to be out there. I like that challenge and I think any guy in the NHL enjoys that. I think that?s why we?re here, we?re all very competitive. So I?m definitely happy they have the confidence to put me out there.” 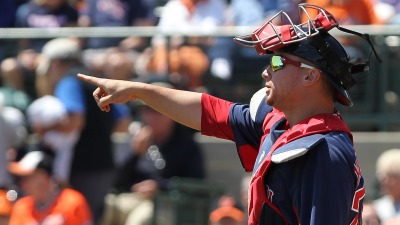