WILMINGTON, Mass. — Zach Senyshyn has plenty of motivation as he continues his development toward becoming an NHL regular for the Boston Bruins.

The 18-year-old right winger for the OHL’s Sault Ste. Marie Greyhounds was selectedÂ by Boston with the 15th overall pick in the 2015 NHL Draft, which was higher than someÂ experts predictedÂ him to go.

Senyshyn completed his first development camp Friday at Ristuccia Arena, and over the course of the week he displayed many impressive skills, most notably explosive skating and a knack for goal scoring, that helped prove why he’s definitely a talent worthy of a 15th pick.

“They showed a lot of belief in my abilities and I’m very confident in my abilities,” Senyshyn said. “It was nice to see their belief in me and I wanted to show them they did the right thing taking me in that spot and being able to prove to them, not just in the games by scoring goals, but being attentiveÂ in all the on-ice sessions and using what they’re teaching me to take my game to the next level as well.”

SenyshynÂ scored two goals with an assist in Friday’s scrimmage and was among the best players on the ice.

“Throwing on the colors and playing a game for the first time was a little bit nerve-wracking, but it was a lot of fun out there,” Senyshyn said.

“It’s a development camp and I learned a lot and I really developed over the course of this week working with these coaches and working with the players as well. It was nice to be able to use what they taught us over the course of this week — use the puck protection skills and kind of using what we learned in a game setting. It was nice to kind of be able to show what I was able to do and kind of skate and score a couple of goals. It was a lot of fun.”

If the Bruins didn’t take Senyshyn at No. 15, a few other teams likely would have jumped at the opportunity later in the first round.

It’s been speculated that theÂ Toronto Maple Leafs, whose front office is now among the smartest in the leagueÂ with the addition of assistant general manager Kyle Dubas and an impressive analytics staff,Â were considering taking Senyshyn 24th overall. Interestingly enough, Toronto traded that pick and moved out of the first roundÂ shortly after the B’s took Senyshyn.

“There was a couple teams that stepped up after the draft and said they would have taken me in that late first round,” Senyshyn said.

Senyshyn has heard the critics of his draft position, and they are a small part of the motivation he brings to the rink each day.

“A little bit, for sure. I use a lot of stuff to fuel the fire,” Senyshyn said. “You know what, I was a real underrated guy this season, I was a rookie in the OHL. But I think it’s a lot of chatter. I know what I can do and I think the Bruins were right taking me in that spot.

“I think when people get to watching me, comparing or doing whatever they want, I think they’re going to see that I’m a guy who’s just scratching the surface…” 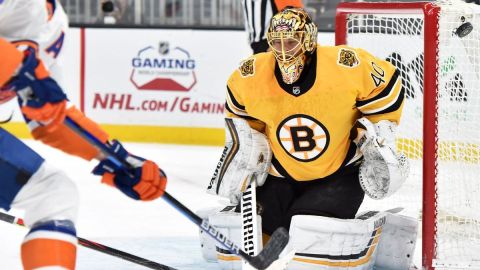