Matt Beleskey has four two-goal games in his NHL career. Two of them have come in the last five days.

The bruising winger, who’s been known more for his physical edge than his goal-scoring touch during his young Boston Bruins tenure, is in the midst of his most productive stretch of the season. He scored twice Monday in a loss to the Columbus Blue Jackets, then did so again in Friday night’s 4-1 win over the Carolina Hurricanes. Throw in the one he tallied last Saturday in Dallas, and he has five goals in his last four games.

How does that compare to his season overall? Well, in his first 56 contests in a Bruins sweater, Beleskey lit the lamp just eight times.

?He?s working really hard,” linemate Jimmy Hayes told reporters after Friday’s win, as aired on “Bruins Overtime LIVE.” “He?s getting around the net, he?s getting in those tough areas, and he?s finishing off on his chances. Like I told him, the goals will come in bunches like bananas here. And he?s starting to do it, so he just needs to continue to go to the net and finish off plays like he?s doing.”

Beleskey’s offensive breakthrough has highlighted an excellent stretch of play by Boston’s third line. Beleskey, Hayes and center Ryan Spooner have combined for eight points over the Bruins’ last three games, including three Friday in Carolina.

?I think our line?s playing well,” Beleskey said told NESN rinkside reporter Sarah Davis. “We?re getting a lot of offensive time. Hayes and Spoons are cycling well, and they just found me a couple of times (Friday night) to get open and get some goals.”

This development has to be encouraging for Bruins coach Claude Julien, who for the majority of the season has had to rely on his top two lines — or, more specifically, the quartet of Brad Marchand, Patrice Bergeron, Loui Eriksson and David Krejci — to handling the bulk of the scoring.

Beleskey and Spooner already have reached or surpassed their career highs in points, and Hayes is on pace to top his, as well.

?If you look at the top teams in the league, it?s all about depth, right?” Spooner told reporters. “There?s been times in the year where we?ve had to rely on the top two (lines) for the scoring, and that?s just not going to cut it. It?s ideal to have all four (lines producing), so I thought it?s been good for the last little bit. It?s good to see.”

Though Beleskey’s two goals alone would have been enough to secure a win Friday over a tired Hurricanes squad, the Bruins’ top line also joined in the fun, with Bergeron and Marchand both finding the back of the net.

Marchand’s goal was an empty-netter, and it came while Beleskey was on the ice, spoiling the latter’s bid for his first career hat trick. But given the tear Marchand has been on this season — the goal was his 32nd, the most on the team and already a career high — Beleskey was happy to pad his teammate’s stats.

?He felt bad, but I told him I?d rather see him score 40 anyways,” Beleskey told Sarah Davis. “He?s having a great year, and I?d love to see him get 40 goals.” 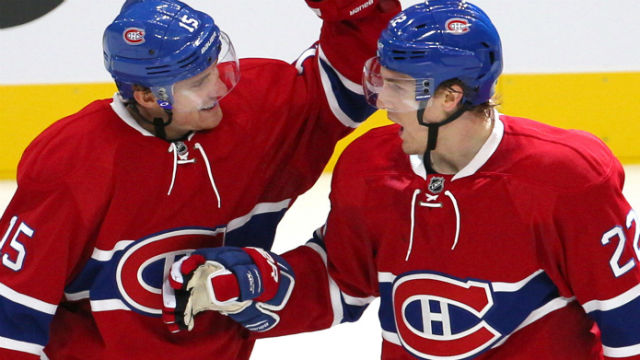