Patriots Leave Plenty Of Room For Improvement In Imperfect Win Over Bucs - NESN.com Skip to content

“Thursday Night Football” tends to be a breeding ground for crappy football, and that certainly was the case again this week.

The New England Patriots knocked off the Tampa Bay Buccaneers 19-14 to kick off Week 5 of the NFL season, and as that unorthodox final score suggests, neither team put forth a flawless performance.

First, the good: New England should be very pleased with the way its defense — and Stephon Gilmore — bounced back after the miserable opening month it endured. Danny Amendola caught eight passes on eight targets and converted three key third downs. Tom Brady completed 75 percent of his passes despite being without Rob Gronkowski (thigh injury) and spending half the night on his back.

Which brings us to the not-so-good:

Protecting the quarterback
Tampa Bay sacked Brady three times, one of which resulted in a fumble that New England lost. The Bucs, who had recorded just one sack over their first three games, were credited with six QB hits — a number that actually seems low after watching Brady repeatedly scrape himself off the Raymond James Stadium turf.

That punishment didn’t hurt Brady’s stats, but exposing their 40-year-old franchise player to this type of abuse week after week could end up costing the Patriots come playoff time. Brady has been sacked 16 times and hit 33 times this season, both of which are on pace for career highs.

Brady appeared shaken up after one particular hit early in the game, but he brushed it off when asked about it in his postgame news conference.

“Just football,” he told reporters in Tampa. “I’ll be there next Sunday.”

Penalties, penalties, penalties
The Patriots committed 12 penalties totaling 108 yards in the game, surpassing their previous season high of nine. Having a flag total that high is problematic enough, but some of New England’s infractions were downright maddening.

The two that immediately come to mind were the roughing the passer calls on Deatrich Wise and Cassius Marsh on back-to-back snaps just before halftime. Both were highly unnecessary penalties, and Marsh’s, which came on a Hail Mary attempt, allowed the Buccaneers to attempt a last-second field goal.

Fortunately for the Patriots, Nick Folk followed that with the first of his three missed field goals, letting Wise and Marsh off the hook. Wise and Marsh were each flagged twice in the game, and four of the Patriots’ penalties came on special teams, including a neutral zone infraction on Brandon Bolden on fourth-and-2 that gave Tampa Bay a first down.

The aforementioned miscues helped Jameis Winston and the Buccaneers hang around even as they struggled offensively for much of the night. Winston had the ball in his hands with a chance to win in the final moments, but his final pass into the end zone fell incomplete.

Finishing drives
The Patriots had to settle for field goals on two of their three red-zone trips, with those drives stalling at the Bucs’ 9- and 5-yard lines. Had Folk not endured such a brutal night — his inaccuracy cost Tampa Bay nine points — that inability to score touchdowns could have come back to haunt Belichick’s club.

Stephen Gostkowski was excellent, though, hitting from 27, 23, 45 and 48 yards in a perfect 4-for-4 performance. The Patriots kicker has yet to miss in 12 field-goal attempts this season. 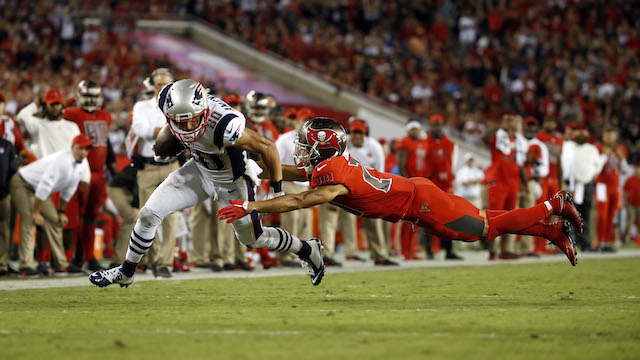