Some notes and nuggets from the New England Patriots’ much-needed Thursday night win:

The trio accounted for 21 of Brady’s 30 completions and 236 of his 303 passing yards in New England’s 19-14 win over the Tampa Bay Buccaneers at Raymond James Stadium.

— Brady’s lone touchdown pass went to Hogan, extending the wideout’s touchdown streak to four games. Hogan and Jordy Nelson are the only NFL players with five touchdown receptions this season.

— Amendola continues to be the Patriots’ most reliable receiver in Julian Edelman’s absence.

The 31-year-old caught all eight passes thrown his way Thursday night, finishing with 77 receiving yards and converting three third downs. He also hauled in a spectacular one-handed catch that was called back due to an iffy offensive pass interference call.

Amendola also came up big on special teams, returning a Bryan Anger punt 40 yards with less than three minutes remaining in the first half. A Buccaneers penalty on the play set the Patriots up at the Tampa Bay 27-yard line — a 1-yard net punt — and helped set up a Stephen Gostkowski field goal.

— The Gronk-less tight end group was a non-factor in the passing game, with Dwayne Allen and Jacob Hollister both finishing with zero receptions. Brady threw Hollister’s way once, and Allen, who still is searching for his first catch as a Patriot, was not targeted. Allen also struggled as a blocker.

Hollister did make a minor impact in his limited playing time, drawing a defensive holding call on third down to extend a drive that resulted in a Gostkowski field goal.

— Brady was legitimately perfect in the second quarter, completing all 10 of his passes for an even 100 yards.

— Patriots safety Patrick Chung had perhaps his best game of the season, breaking up three passes and recording one tackle for loss. Fellow safety Devin McCourty led the Patriots in tackles with 11.

You're missing something, David Andrews. pic.twitter.com/ikJgry5ugm

I just made the new #TNF NFL promo…

"Serious question. Why are we even out here?" pic.twitter.com/npACLcwaCA 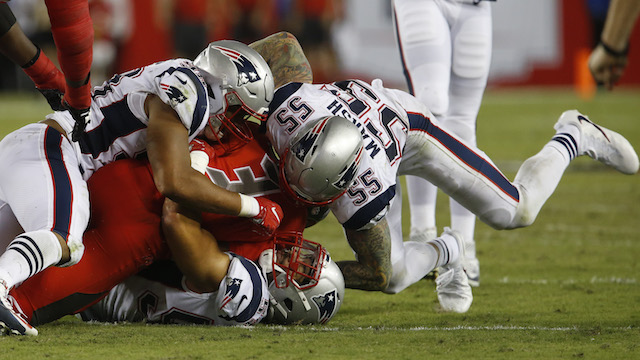