The New England Patriots, once again, are in the Super Bowl. And, once again, New Hampshire Motor Speedway is getting in on the action.

Last year, NHMS president David McGrath made a bet with Atlanta Motor Speedway president Ed Clark that the Patriots would beat the Falcons in Super Bowl LI. And after the Pats’ thrilling comeback win, Clark was forced to fly the Patriots flag outside the Atlanta track’s offices, among other things.

So ahead of New England’s Super Bowl LII matchup with the Philadelphia Eagles, McGrath has agreed to a wager with the CEOs of Philly-area tracks Pocono Raceway and Dover International Speedway.

If Patriots win: Dover buys a blue crab lunch for NHMS and gives one NHMS fan tickets and an RV spot for a race at the Monster Mile. Pocono also provides ticket/RV package, plus posts photo/video of Tricky, the track mascot, wearing a Pats jersey while congratulating the Patriots.

If Eagles win: NHMS buys lobster roll lunch for Dover and gives tickets/RV package for a race at the Magic Mile. The Loudon, N.H., track also provides tickets and RV spot for a Pocono fan, and posts evidence of Milo congratulating the Eagles while wearing a Philly jersey.

McGrath, for one, seems quite confident he’ll win the bet.

“28-3. I’m not sure I can say much more than that,” McGrath said in a statement. “Last year proved just how difficult it is to beat Tom Brady and Bill Belichick. When the confetti falls on Sunday night, we will be celebrating back-to-back NFL titles and a remarkable sixth ring for the Greatest of All Time.

“So, and I think I said this last year, if my colleagues would like some of our famous New England lobster, they need to book a trip to New England. I greatly look forward to sampling some blue crab while we celebrate another New England title.”

Pocono CEO Nick Igdalsky, as you might expect, believes he’ll come out on top.

“I have been a Philadelphia Eagles fan my entire life,” Igdalsky said. “This is the year, and they will soar higher than they have ever soared before on Sunday! Milo will end up in an Eagles jersey when it is all said and done.”

Dover president and CEO Mike Tatoian echoed the sentiments of all Eagles fans, who’ve been waiting for a championship since 1960.

“Philadelphia has waited a long time to notch its first Super Bowl win,” Tatoian said, “and it will be that much sweeter when we beat the Patriots.”

Of course, these three men aren’t the only ones who’ve engaged in a high-stakes bet ahead of Sunday’s big game.

Here Are Some Of 1,300-Plus Complaints About Super Bowl Halftime Show 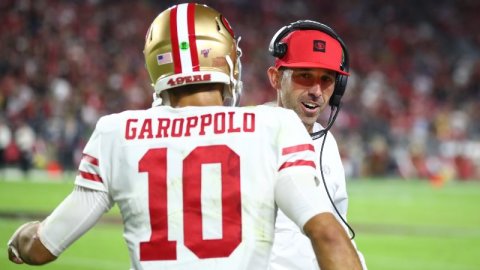