In the four New England Patriots training camp practices that have been open to the media, Jarrett Stidham has thrown six interceptions and nearly thrown a seventh.

Cause for concern? Not yet, Bill Belichick said.

Belichick downplayed Stidham’s high pick total during his Friday morning video conference, saying mistakes are to be expected this early in camp.

“I would say ultimately, we?re going to reach a point where we have to really evaluate what the performance is. I think in the early stages, there?s definitely timing, confidence, anticipation issues that are different from player to player and depending on who they?re in there with, what the play was, how things unfolded and so forth.

Patriots coaches, Belichick said, make judgments based on a player’s full body of work — and that even with the regular season just over three weeks away, it’s still too early to make those calls.

“Our job is to evaluate the overall performance and progress of the players,” Belichick said, “and I think as we get a little further into camp, that?s easier to do when everybody has done their assignment multiple times in multiple looks and they?re confident and they know what they?re doing and all that. The first time through for any of us doing anything doesn?t go as smoothly as what it does when you?ve had multiple repetitions at that experience.

“That?s what our job is. That?s what we?ll evaluate. It?s certainly an ongoing one that I think is going to become more important in succeeding days. The first day or two, three, whatever, is not as critical as going forward when you?ve been through things multiple times.”

We’ve seen highlights and lowlights from all three Patriots QB hopefuls this week. Each received an equal split of repetitions until Thursday, when Stidham threw just six total passes in 7-on-7 and 11-on-11 drills compared to 15 for Hoyer and 17 for Newton. 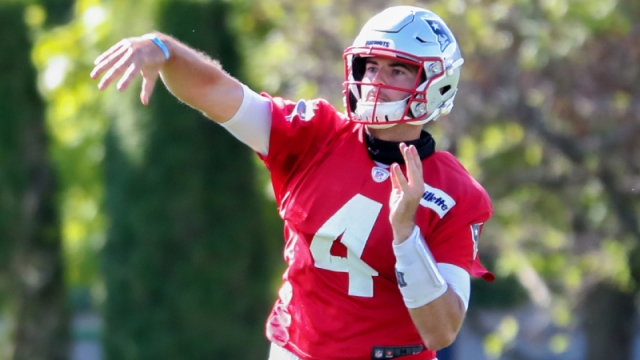